We’re having an issue with the RS2 connecting to our devices via Bluetooth. It will pair but not connect. We’ve tried a Windows 10 tablet, Android and iPhone.

We had no real issues connecting to a reach RS+. But given how the RS+ had issues maintaining connecting perhaps it’s a Reach Bluetooth issue?

Either way, so far I can only pair and not stay connected via Bluetooth any device and the RS2.

In my experience using windows 10 tablet and FieldGenius 10 connected to RS2 . In Reachveiw you select the device in bluetooth settings then windows popup says tab to connect and verify the code , press yes, Then go to FG and select reciever Emlid then type of reciever , (the RS and + unit were called reach but I see RS2 is called rover .) If everything is correct it should connect .

(the RS and + unit were called reach but I see RS2 is called rover .)

From what I have tested (FieldGenius) , This was the only reason for not connecting if everything else is setup right.

I’ve now tried another windows laptop, an Android and an iPhone and they can’t stay connected to the RS2.

What software you use on Windows? Or Android/iPhone?

Once you specify position output via BT in ReachView and launch the software that can accept this position (running on Windows or Android), there should be no issues. It’s very unlikely both units have Bluetooth issues, there must be something with the setup.

I agree. But we’re just using Windows 10 or whatever the latest Android and Apple software is.

What I can’t understand is that both units will pair but not stay connected on multiple devices. Is it the two reach units, or four different computers?

Maybe I setup Bluetooth wrong? But seeing as the reach units appear, what could be wrong? We’re at a job site right now and I’m baffled.

I believe you need to make tests with some software running on Windows to confirm issue persists. Reach will appear as just a “paired” device (not "connected) unless it’s actually connected to a software and feeds NMEA.

I’d tested it through our software without luck. But your comment I need the software made me think about the com ports. So I deleted them all, including for other devices and completely removed Bluetooth.

After re-adding the reach units they appear to now stay connected.

I don’t understand it, and I’d tried those steps individually before. Anyways, it seems to be connected now!

I had a follow up question - we’ve been having issues with our EM38 survey equipment dropping via bluetooth. After testing multiple computers and a couple EM38s I’m wondering if the RS2 is sending too much data over bluetooth for bluetooth 4.2?

People have been using EM38s + GPS for over 5 years now, yet we’re having a lot of dropped connections with the EM38. I’m wondering if its possible that the RS2 is sending a lot of data that the computer (we’ve tried multiple) is losing connection with our survey equipment because of it.

Does this make sense?

Bluetooth 4 is supposed to be good for ~305kb/s of throughput.

In layman’s terms, that is about 20 typical text terminal screens full of data per second.

As a rough guess I think you’ d be consuming maybe 1/20th of that with ReachView set to a 1Hz sample rate. (test yourself to be sure)

What is the distance between each connected Bluetooth device and your host computer a tthe time you experience problems?

If one is very close and the other not so close then you could be experiencing RF saturation problems.

So in order of proximity, you have:

Can you download a Bluetooth app that shows the RSSI or some other signal quality/strength data for each client? (maybe even for throughput - to answer your other question)

@bide, thanks for the detailed questions.

It has occurred to me this is an issue because the bluetooth dropoff happens primarily when moving on the ATV. When I’ve tried carrying all 3 elements on my person or left the equipment running while on the turned-off ATV and dropouts did not happen.

That being said, turning on the ATV and letting it idle does not seem to cause the issue. As well, once the bluetooth has dropped often turning off the ATV or moving the equipment around does not allow it to find the EM38 via bluetooth.

This is not a variable we thought of testing. I will see if this affects the issue.

You are correct on the ordering of proximity. The metal chassis of the ATV is between the EM38 and the computer.

I will also download a bluetooth RSSI app and check the signal strength.

Lastly, I have attached a photo showing our old wired setup, but it should help with visualization. With the bluetooth setup, we have the computer in the bin on the front and the RS2 on a pole on the back of the ATV. Everything else is the same. 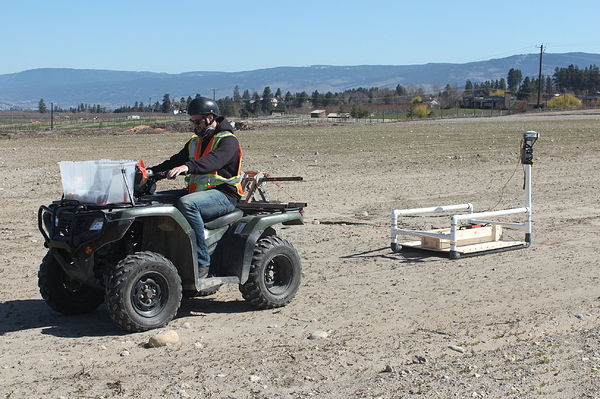 Well, with the metal rack under the computer and the metal handlebars and maybe/maybe not the metal spooling rig on the back of the ATV (but certainly the metal frame. Why not just stick a good (or beefed up bluetooth unit out the back of the quad and route a USB extension cable up to the front mounted computer?

This way the antennas can all see each other directly without any metal inbetween. I think that is the best chance for success.

The other thing is the ATV ignition system (probably located somewhere between your knees). Even though it doesn’t seem to affect at idle, it might be that bluetooth can find a happy channel without interference when the the ATV is idling, but when you are driving and the throttle is moving up and down, maybe the interference is more broad spectrum and none of the bluetooth channels are free of interference.

I would put someone on the back (sitting backward and holding the computer). If that works without dropouts, then mount the computer back there or leave it up front and run the USB extension to an external bluetooth adapter out back.

14 posts were split to a new topic: Off-topic

Have you managed to figure out what may cause the Bluetooth dropoffs? Were @bide’s suggestions correct?

If not, may I ask you to specify what’s the update rate frequency was on Reach RS2 when it happens?

We haven’t tested bide’s suggestion yet as we sent the EM38 unit in for repairs. We will test it as soon as it gets back.

The update frequency for the RS2 was at 5hz and 1hz, both frequencies created issues.

Please, keep us updated regarding these tests.