We’ve just pushed a new dev update - v2.13.0. This update contains huge improvements for our positioning engine, RTKLIB. Starting with this version, Reach can peform GLONASS ambuguity resolution with a non-Reach receiver acting as a base. This will immensely improve both convergence time and fixed solution stability. We’ve also fixed BeiDou AR, which should give a serious boost to our users in Asia and Australia.

Small note: you may notice that we skipped v2.12.x. From now on versions where the second number is odd, will be considered dev. The next non-dev release will be v2.14.0.

Another small note: Reach M+ and RS+ devices will skip this round of dev updates and will be updated to v2.14.0 directly.

Recommendations for using this version

New features are coming to Reach receivers, so stay tuned

v2.13.1 is out! It’s mostly an under the hood release, bringing things in sync with the RS+ and M+ devices. Among these things is the beautiful new Wi-Fi interface: 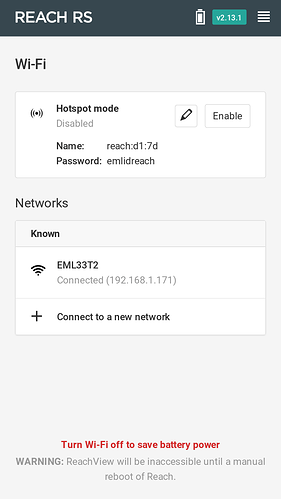 Unfortunately, due to hardware limitations, the Wi-Fi scan feature is only available on the + series devices.
Oh, and we also fixed a bug with the battery indicator that would sometimes not show the fully charged battery state.

v2.13.2 is out. It’s a huge improvement for our survey tab. The project view has been reworked from the ground up and will act as a foundation for new surveying features. All the screens have been given a facelift, too. 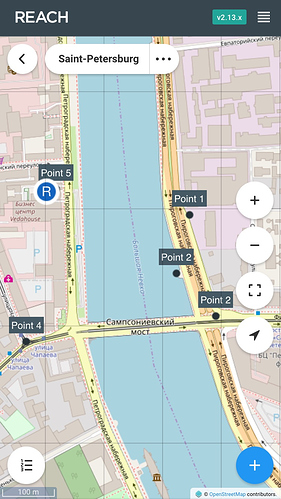 Hope you enjoy this update! These features are coming to the + devices soon via the next non-dev update, v2.14.0.

The new version of iOS ReachView app has been released on the App store. It heavily improves the UI performance.

Once you get your first fix, it will endure conditions worse than ever before.

Does that mean i can “fix” my points in the basement if i run really really fast?

Other then that. Pure joy!

Try reducing the elevation mask to about 5. This build will work better with more information, even if the quality is lower.

Oh, how about multipath?

Congratulations.
Remarkable update.
For the first time I feel confident using L1 Beidou in Australia.
And the improvements in Glonass AR are fantastic also.

Always nervous with the Dev updates, but this one appears solid.

Question:
When changing from Glonass to Beidou do I need to (still) deselect all but GPS, apply and then select GBPS and Biedou and whatever else?

Getting a solid 30 satellite fixe with a 10 deg mask, GPS, Beidou, Galileo, SBAS and QZSS and 28 satellite fixe with GLONASS rather than beidou. I need the 18K Lora data rate, so we shall see what range this all holds together out to, and look forward to going into the trees to see how robust it is.

5 posts were split to a new topic: FIX drifts to FLOAT when raising Update Rate Frequency

Can’t wait to try out BeiDou for a change! Although the data rate is pretty high compared to Glonass… thinking about which RTCM messages to use for LoRa, would it be better to use BeiDou @ 0.5Hz and sacrifice QZSS / GAL or bring BeiDou down to 0.1Hz so we can keep QZSS / GAL on? Has anyone played around with this with any success? Or does it just come down to picking the one with the most satellites over head…

We’ve got some good projects coming up that will test the endurance of the new fix too!

Yes, please provide optimal settings for Base and Rover for LoRa and NTRIP method to take advantage of this great update for area in Asia.

We took our two Reaches out this morning, Beidou working really well on this build! Also seemed to do a great job handling the 5 degree elevation mask. From our crude testing we found the following to work best (i.e most satellites, fastest fix, good AR ratio). GPS @ 1hz; ARP @ 0.1hz and BeiDou @ 0.5Hz running over 9.11 kB/s LoRa. Running Beidou @ 0.1Hz was still quick to get fix but the AR ratio appeared a bit sporadic…

We will try get the rover out in the field to stress test the stability a bit more.

Edit: I should note that this was in the Australia region.

Does that mean i can “fix” my points in the basement if i run really really fast?

Oh, how about multipath?

The idea here is rather simple. Multipath problems mostly arise in proximity to buildings and other big objects and in this kind of conditions, measurements of the “high” satellites are often affected too. To avoid that, we’ll need a an extremely high elevation mask, which will cut off most of the sats in our view. So instead, we set the mask really low so we can take advantage of more sats, some of which might not have been affected by the “big wall”.

Question:
When changing from Glonass to Beidou do I need to (still) deselect all but GPS, apply and then select GBPS and Biedou and whatever else?

That’s been fixed a rather long time ago. You are still welcome to check

So, this means that Reach RS could provide good FIX with good accuracy (minimize the multipath effects)?

It’s something we intend to do soon.

When trying to update to ReachView v2.13.0 via check, it is not rolling out?
EDIT: never mind, have to enable DEV.

@egor.fedorov
Is the Glonass AR calibration something that has to be done for each start-up, or is it saved?

“Another small note: Reach M+ and RS+ devices will skip this round of dev updates and will be updated to v2.14.0 directly.”

This means that Reach RS+ could not take advantage of improved Beidou processing until 2.14.0 release which is when?

It’s hard to give an exact timeline, but we have early August in mind.

This thread needs a bump! New features have been available for 3 days now and the announcement of them was slipped in with a quiet edit!

I just happened to open the thread which was apparently inactive for 2 weeks - not so!

We have some updating to do now!