Using REACH to survey under a tree canopy

Has anyone tried using REACH under tree canopy? I am trying to survey sub-tropical rain forest for a house site, about 30m x 30m, in New Zealand. There is an govt GNSS (all bands) ground station 25km away.

My plan is to post process the fixes with the govt ground station or set up a nearby reach unit with a clear sky view. I have thought I might need the Tallysman 40dbi antenna to increase the SNR. The fixes need to be <50cm (but <20cm would be better) relative to each other. The height I will get optically from either a dumpy level or rotating laser.

Has any one had experience using reach under a canopy? Does it get a fix? and approx how accurate is it after post processing?
Will the more powerful antenna make a difference?
Which base station would be best to use, a close reach station or the Govt GNSS station?

Thanks for the answers/thoughts in advance.

I’ve tried Reach under the tree canopy, and it has produced a fix, but there are some things to consider:

Here are some examples of the outcome when working with a blocked sky view in the trees:

The fixes are the surrounding green dots and with the yellow floats in the middle. In this picture, I wouldn’t consider any of the green fixes to be correct. 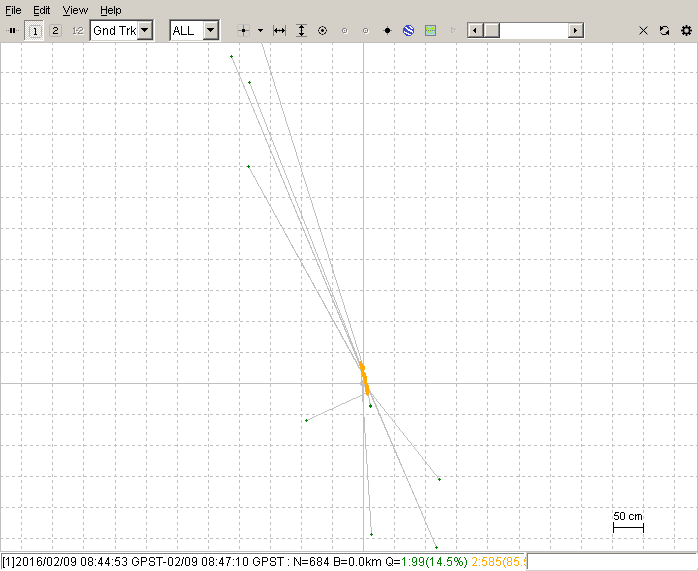 The actual position is still ambiguous, but it is better than the last one. 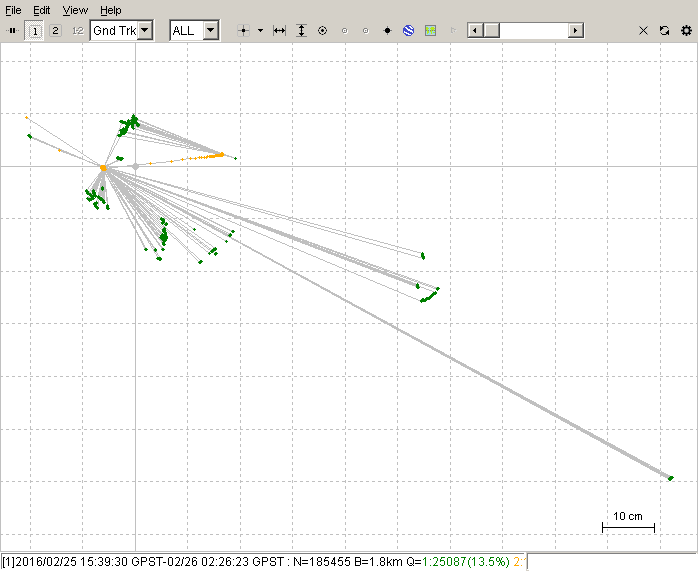 This one looks quite bad as well, but with RTKPLOT, you can zoom in and see if there is a small spot with 90% of your fixes. If you see that, then you can safely discard the outlying ones that are clearly errors. The red is single mode (no RTK), but there are yellow floats and green fixes hiding in there too. 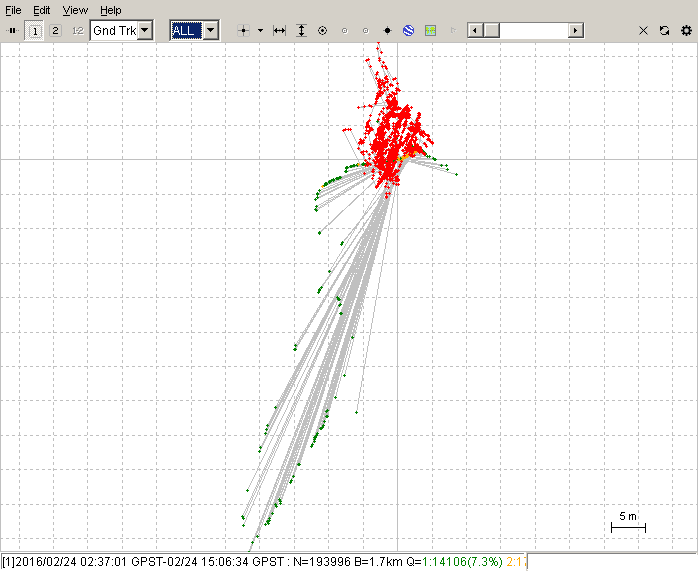 We can’t leave this off on a bad note, so here is one of the good fixes. I hope to be getting more like this. If everything is good, then it works really well and there are no fixes out of place. This one is done with the antenna raised up 9 meters to the height of the canopy. Consider that it is mounted on a flexible plastic pole held in place by strings, so the wind does move it around a little bit: 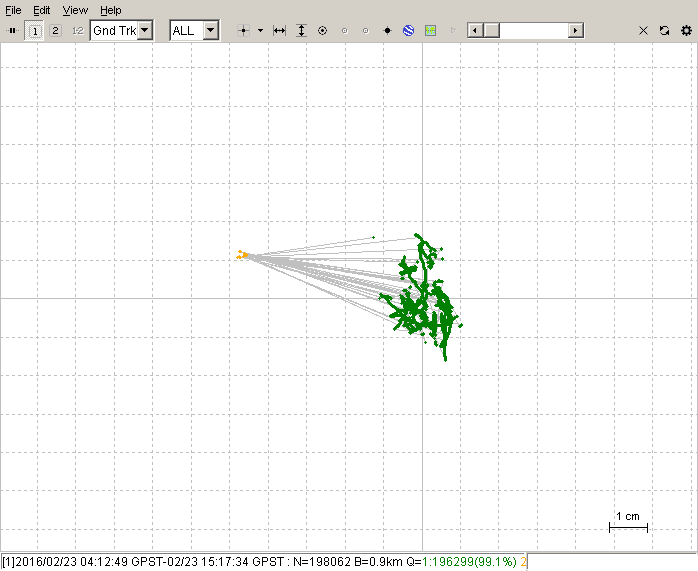 Thanks very much for the information. I may need to do mix of raising antenna/cutting the canopy on some spots and bearing/range on others.

How long for each exposure on the above “fixes” (approx)?

I read your post on the antenna… quite good. I think I will copy the the top antenna mount, if you do not mind.

I am going to try the higher gain antenna as well.

It sure would be nice to get a good fix right on your marker with a little raising/cutting and not have to traverse from a place with a better sky view. I’ve been dealing with traversing in, and after doing it a few times, I’m still not happy with my accuracy. So far the best I have done is with the Brunton pocket transit and a steel tape. I also thought about marking a few accurate spots nearby to sight in from and averaging those results. That should also give an idea of the margin of error.

By all means copy the antenna mount. Good luck with it and maybe you can improve on the idea somehow.

I was also looking at those higher gain antennas with the threaded mount and the low-pass filter. I can’t remember the model I was looking at, but every website said, “Click here to request a quote.” and I thought to myself, “If I have to ask, then I can’t afford it.”

I haven’t used an antenna or a raw GPS before but this looked suitable and it was waaaaay cheaper than antenna’s from Trimble and et al.

I was going to give it a try. When I get the two reach units should be easy to compare.

Nice old school on the compass! I was going to try a dumpy level sighted and set up on a known bearing with an LRF for distance. Kind of a poor mans total station…

I’ve used this Digikey 1526-1010-ND Tallysman antenna and I was able to get a fix much faster than with Reach kit antenna.

You must be sure to use a three times larger ground plane than the diameter of the antenna.

If you have access to a 3D printer making a holder for this antenna should be easy. Combining the ground plane into the antenna container might make using the antenna more convenient.

200mm diameter should do?

This may be a silly question but does the antenna sit directly on the ground plate then the gasket or the other way around?

I just place the antenna on top of the ground plane. 150mm would be big enough but larger would not hurt.

Going to use one of these

Regarding ground, would any metall plate do? Have read that copper or brass is the best.
I have zink, galvanised steel and flexible led to work with here. Any thoughts around this?

There is an govt GNSS (all bands) ground station 25km away.

Which base station would be best to use, a close reach station or the Govt GNSS station?

and you need a very good view of the sky. The canopy and the branches are going to give you trouble with multipath. If you want a precision under 1 meter you definitely need to put the antenna above the canopy.

I use aluminum foil tape and I find it works very well. The foil tape is very light weight which is good if you want great GNSS antenna reception on your UAV.

Any conductor works. The better conductor the better the shield I guess. Gold would be the best and I imagine thats why it is used a lot in satellites.

Hey thanks, when I eventually get the survey done, I will try both. I did some post processing test from two GNSS sites 100km away using the L1 signals only and the results where still pretty good using the RTKlib, within 5cm from the actual position.

I just did a test on the same dataset.

With a base station within 1 km I get this result: 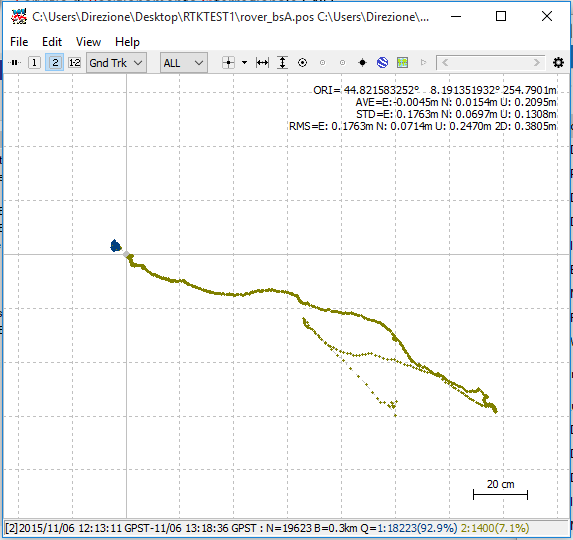 with a base station at 30 km this result: 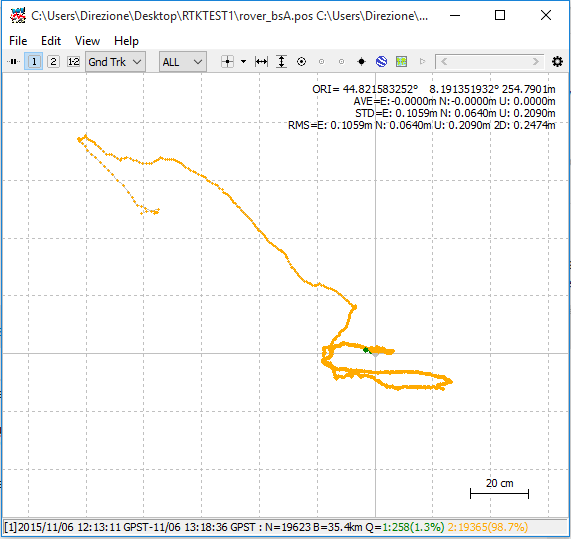 The problem is to get the fix… when you have it the results are good! 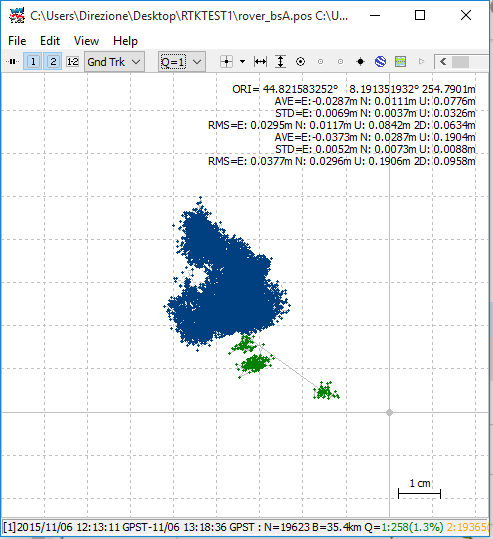 Look at the AR between the two stations: 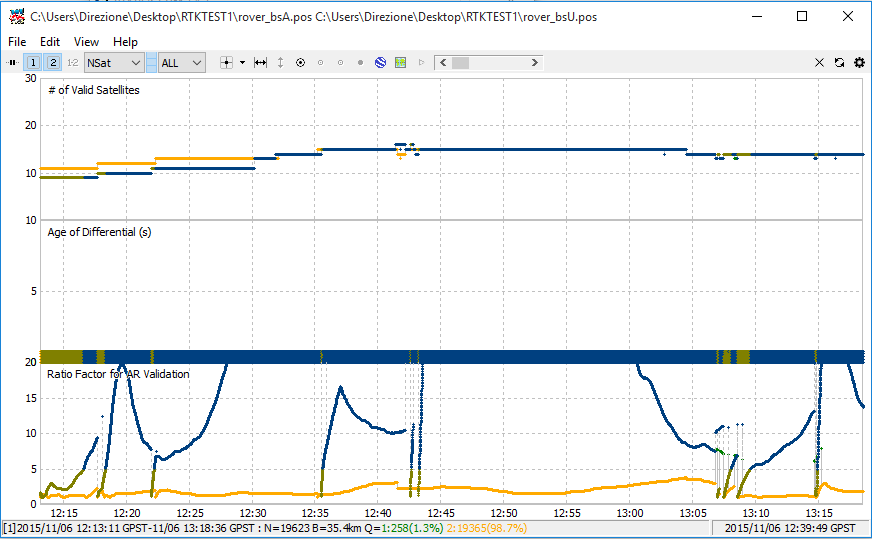 And at the STD: 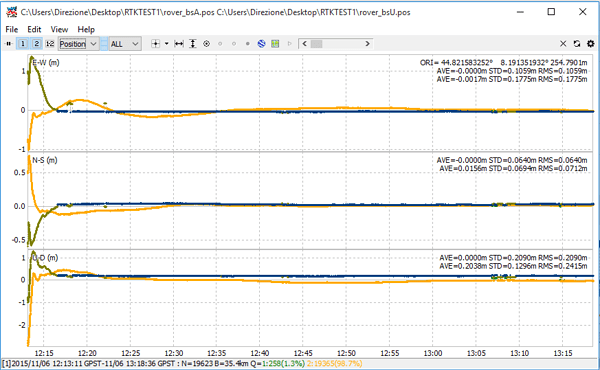 Thanks, just did the same between two base stations, same result - floats are ok accuracy but the fixes (if you get them) are where the money is. Trouble is they are rare and the exposure time for the fix a way too long

Close base station it is then!

If you want accuracy and precision you could determine the base station position processing with the Govt GNSS station (better if you get a fix) and then use your local base station with the position acquired. I often do that when i don’t have cellular network to connect to the govnment NTRIP caster (witch uses VRS anyway).

New to Reach.
Purchased to set property boundaries on a 150 acre plot of land.

Been checking the accuracy of Reach.
Discovered accuracy to be off by up to several meters when trees (defoliated, wintertime) are within even 10 meters of position.

Accuracy when out in the open seems to be within the centimeter accuracy stated.
There is a US Government NGS marker just off the property, so soon will set up over the marker to determine true accuracy.

In my opinion, attempting to achieve centimeter accuracy under tree canopy may prove troublesome.

I have progressed and learnt a lot about the limitations of Reach in 12 months. You are right under a canopy it is impossible to get that accuracy. I cleared/used some​ windows in the canopy and had a 4 m antenna pole with long exposure and got 1-2cm. Got at least two points for a bearing and used optical instrument (builders level) and LRF for the rest of the points under the canopy. It worked very well.

After about a year of using reach under a tree canopy, a couple of tips.
Setup: