I just bought emlid reach M+ to use as a base. I would like to subscribe for dev version but there is no option for that. how do I do it?

here is the screenshot: 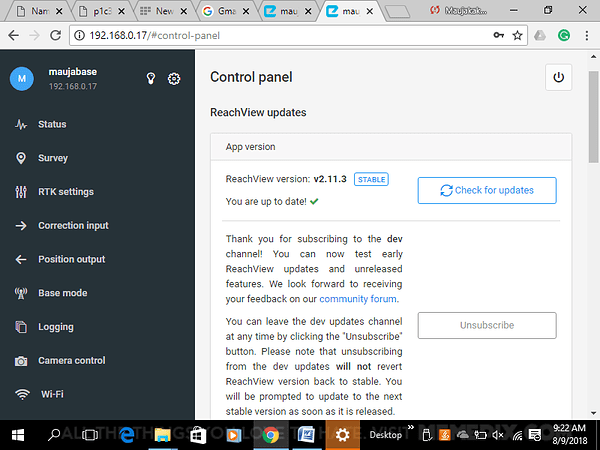 You are allready subscribing.
If you hit Unsubribe you disable this.

When subscribed it should show dev version, like on my rover its showing here is screenshot for a rover: 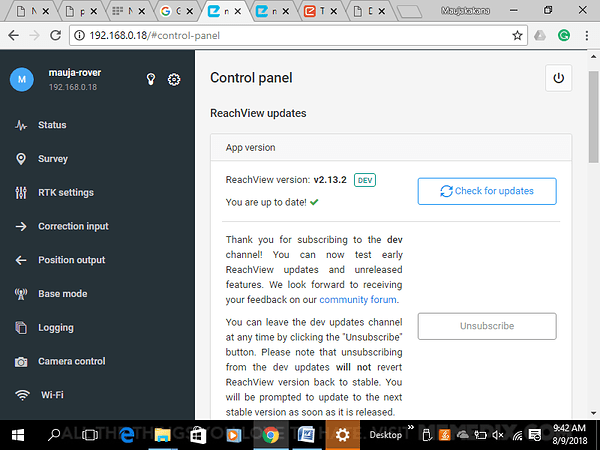 I am thinking of unsubscribing both base and rover. if i unsubsrcibe both will I have the same versions?

you subscribed to dev on the ROVER, and it updated to latest dev version. v2.13.2.

you need to log into BASE, re-subscibe again, and update ONLY IF you want to be on dev v2.13.2 like ROVER is.

Or if you just want to go back, don’t do this… and you’ll have to REFLASH back the ROVER ONLY.

Once you move forward with new versions, you cannot go back unless you REFLASH.

https://docs.emlid.com/reachrs/common/reachview/firmware-reflashing/
Make sure you know the difference between the previous NON-PLUS version and the NEW PLUS version routines.

To add to @timd1971’s comments. Can you confirm that you have one Edison-based non-plus unit and one Neutis-based plus unit?

If that is the case, then it will explain why you are up-to-date on both units, but showing different versions.

This time dev updates can be installed on RS receivers only. The latest firmware version for RS+ is v.2.11.3.

Thank you very much everyone. I think I will go back to stable version for now. If I unsubscribe for both m+ and old reach will I be able to just go to the latest stable one?

Not as easy as that…first unsubscribe… then REFLASH to start all over and get upgraded to STABLE after that.

Edit: you may want to read up some more about some issues with the new PLUS versions and a recent update to resolve some of those issues… you may end up doing all this for nothing for the PLUS version devices you have?

Check this out first!

Hello everyone, We’ve just pushed a new update to our stable channel - v2.14.0. As promised, this version has been released for all Reach devices. New features, previously teased with dev updates, are now available for Reach M+ and Reach RS+ too. This post will quickly glance over everything that has been added to our receivers over the past two months. You can view my post about dev updates for more detailed descriptions. Features Reach will now correct GLONASS inter frequency biases, allow…

I reflashed and updated to the latest version. Thank you everyone for help…