I have read over the topic below and have tried following the steps laid out in the tutorial with no luck.
Previous Forum Topic:

My results from the tutorial using local data and all steps. 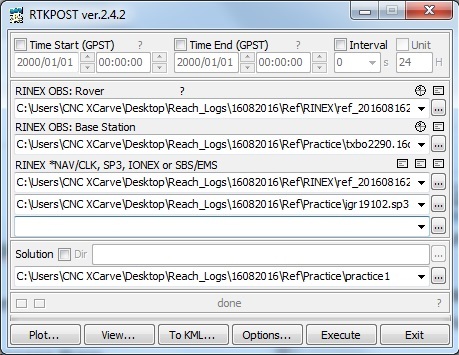 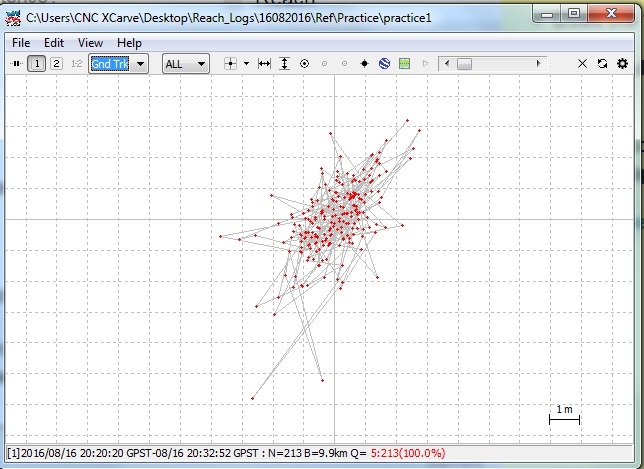 I am trying to run a mission using a base station and rover. There seems to be two ways people are doing to get to the same outcome.

Our goal is to get precise locations for a camera trigger events out in the field using only a base and rover reach setup. We are using a pair of reach devises in kinematic mode to try and do so. We have created a camera trigger cable that will send the signal at the time the camera is triggered but are have problems remaining fixed while in flight. I have even considered running a PPP setup with reach devises as multiple ground control points but am still stuck on processing that data. There is a company our of Australia that is doing something similar with their in house product linked below.
https://www.propelleraero.com/aeropoints
Any and all ideas on a solution are appreciated.

Fred from Propeller here. We’ve certainly learnt a lot about GNSS post processing developing our AeroPoint product. I’d be happy to give you a few pointers.

Fred,
First off I have been reading about your aeropoints and they look really awesome. I like the design and form-fit you guys have come up with. I think this is going to be the way the industry will lean towards as it lends itself quite well to people who dont have high grade GPS equipment or the man power needed to collect the same high precision data. Also the accuracy you are showing has blown me away. I really want to try these out some day.

Back to the problem.
When I get back to the shop tomorrow I will upload pictures and what we are working with. We have been able to create a cable that signals the event when a picture is taken from the camera. Our biggest hurdle currently is getting the two reach devices to stay in constant communication. We can get a float position and randomly get fixed. After reading the forums I have a feeling that this may be due to poor antenna connection.
Our current setup is:

The rover unit is not injecting GPS but just going along for a ride on the aircraft and collection the events as the camera is triggered by a pixhawk via mission planner survey grid.

As stated originally, we are trying to capture camera events using accurate RTK data. We have flown a mission that went well until we processed the data and realized the rover was switching Q values the whole time (i.e. fix, float, single). The problems I am having is if its better to try and remain fixed using a base/ rover setup while flying or just run both reach devices on single rover mode for post processing later. I am having a hard time determining the better route to take. Again our goal is to end up with highly precise geotagged photos in as few steps and complications as possible.

If you only require the coordinates after the fact to geotag photos you’d be much better off just logging the base and rover observations to RINEX files and post processing them so you don’t have to deal with the complexity of radio communications.

Fred,
That does sound like it may be the better way for us to go. I think the main thing we are stuck on is the processing part. Below are the two different setups we use with the reach devices.

We seem to be having a lot of problems with getting a fix at this point while running RTK mode (1 setup). If it would be better to process as in setup 2 I would need help with the steps involved. In the tutorial I linked above, I am not understanding where some of the files are coming from.
https://docs.emlid.com/reach/gps-post-processing/
Image from Emlid tutorial above 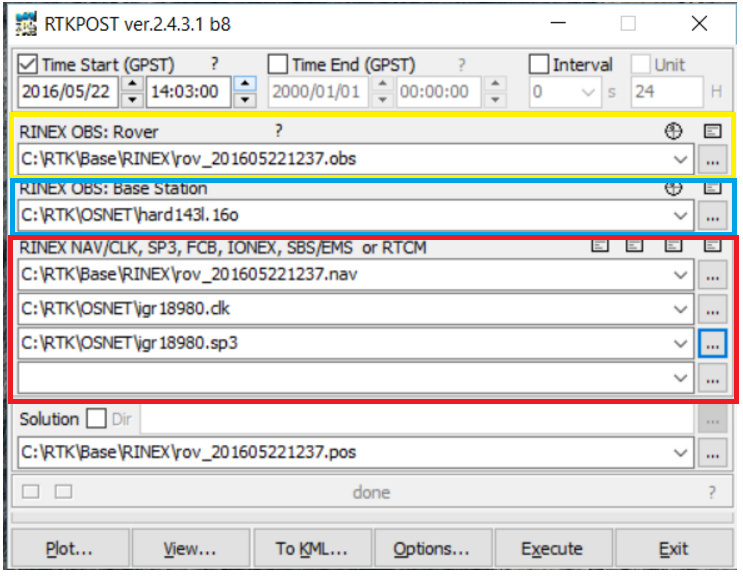 blob.jpg743×576 147 KB
Yellow box- observation file from base station set as rover and collecting data
Blue box- Im guessing I would get this data from the near by CORS station at roughly the same time I took the data.
Red box- I am lost at this point. If seems I can pull an sp3 file and nav file from the CORS site/ rover but not a clk file as shown in the tutorial.
tobias-dahms (Tobias Dahms) August 31, 2016, 5:27am #6

BTW: I would not make a knot into the antenna/ any cable.

Thanks, I will keep that in mind next time.

It is true that mapping flights do not necessary need real time kinematic data link, as post processing will always be necessary at the end.
I get sparse informations of the required set-up in the forum, but it would be nice to have a proper entry in the Reach doc site. Including all 3 aspects :

Sorry if that already exists !

@Pascal_P
I work for a UAV company in the US and we have been trying to develop a stand alone RTK setup for aircraft, both fixed wing and multirotor. The reach setup by far has had the best results and fairly easy once overcoming the learning curve involved. I think most of the things you have posted are currently under development.
A built in logging feature for the base station is in the work as well as the camera hot shoe. We have made our own hot shoe the sends a signal to the reach once a pixhawk triggers the camera. Somewhere on the forums is a description on how to do so. I would explain in greater detail on how we created this but it is not my side of the project thus im not 100% sure on how it was made.

The main focus of the post originally was to obtain a better walk through of the post processing steps. Im still not sure on how to complete a lot of it.

Sorry for the slow reply. I have made a new post with more detail and all of the correlating data.

I have tried every possible thing I can think of to process my data through RTKLib. Below I will attach 3 different sets of files for observations I took the other day. The end goal is to have a base station reach and a rover reach on a moving...