I decided to perform a quick test of the M2’s RTK accuracy using NTRIP here in Upstate New York. I have always been a classical post processed GPS (GNSS now) person but decided to test drive the RTK capabilities of the M2 with Harxon GPS500 antenna. I have previously reported static/rapid static post processing results with the same receiver in an earlier post. I utilized 5 NYHARN control monuments and entered in the coordinates (Lat, Long, Ellip Ht) to also test out the Stake Out feature in the ReachView app. There was no scientific approach to each measurement. I simply drove up to each monument, set up rover rod/bi pod, turned on receiver, waited for fix then simply navigated to monument. Set up on monument and averaged between 30 and 60 seconds in measurement mode. Additionally for the last 3 stations that I measured I took a screen shot of my Stake Out screen showing the real time epoch distance to the monument being measured. Here are the DX/DY/DZ values for those 5 NYHARN monuments as compared to the actual NGS Data Sheet published values.

Here are the screen shots of the Stake Out mode for many of the above stations: 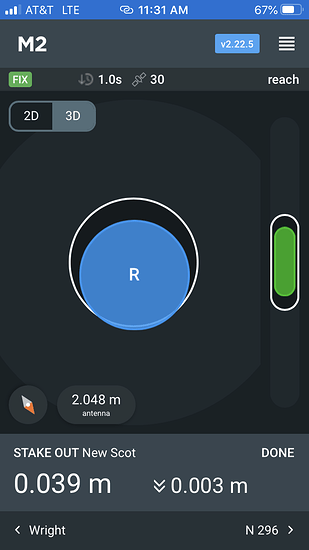 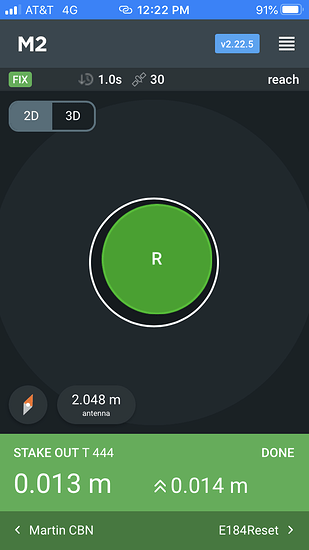 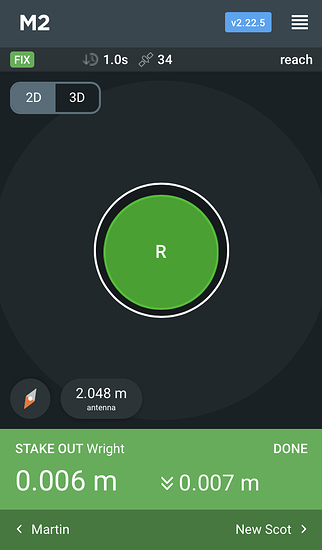 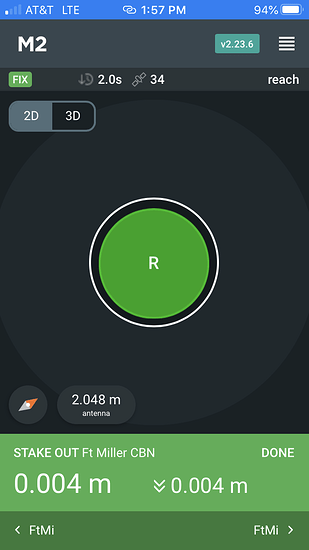 Additionally I just performed a quick and dirty test of the new ReachView 3 Beta app for the orthometric vertical real time accuracy utilizing the new coordinate system transformations and geoid models with my android tablet on a high accuracy point at my house that I had previously occupied and adjusted with OPUS Projects with an iGage iG3s receiver. I utilized the WGS84/UTM Zone 18N and NAVD88 Height downloaded models.

Conclusion: I am impressed and still need to perform more testing but figured I would share these results for those curious. And this M2 in RTK mode?..”It knows where it is”

Thanks for sharing your results!

We’ll be happy to see more tests of Reach M2 both in RTK and PPK if you post them.

@polina.buriak When do you anticipate the release of ReachView 3 Beta for iOS?

I attempted to do something similar here in Ohio with the M2. It was utilizing OH CORS and wanted to do a static track for a couple hours to see how it compared to some other units I have tested. Unfortunately, I don’t think the software I was utilizing, VisualGPSView, was able to use the GNGGS strings. It must need the GPGGS.

I will have to try that through the app this weekend

David, thanks for posting this. Do you think you could also post a photo of your M2 setup
Pete

What app are you using there. If reachview, where is that screen found. Sorry, new user.

I’m afraid I can’t give you any exact dates. We’ll inform you once the ReachView 3 beta version is available on iOS.

As David has mentioned, the ReachView 3 beta app was used during the survey.

@Pete_Watson
Here is a link to my static testing with a couple of photos of my M2 setup.

I recently occupied/observed two local NYHARN control monuments nearby to test the Reach M2’s accuracy/precision under ideal conditions. I simply wanted to know what this device is capable of different time occupations post processed utilizing the NYCORS base stations and to share the results here. The two monuments chosen were each occupied for a slightly over 2 hour duration (I purposely went over two hours to evaluate OPUS static processing also). I chose a couple of NY CORS stations at di…

@polina.buriak I appreciate that. I think I remember seeing one of your colleagues stating that the iOS version was about 30 days out from the Android version.

Just wanted to let you know that the ReachView 3 Beta is now available for beta testing on iOS.

You can check out this Egor’s post for more details:

Hi everyone! We are happy to announce that ReachView 3 Beta for iOS is now publicly available for beta testing on TestFlight. This version includes all the core features like the new fast and beautiful point collector with full coordinate system support, on-your-phone project management and NTRIP profiles for easy correction configuration. How to enroll Follow this link from your iOS device. This will lead to you to install the Apple TestFlight app used for beta testing. From within TestFligh…