(Probably should be wearing fluorescent safety vests at least so they don’t get run over???)

Welcome to MicroSurvey Software Inc.'s YouTube channel. Here you will find instructional videos on how to use our products and features.

It is now available ? it is very expensive ?

Probably not yet. Nothing on their site. Probably for teasing.

I would assume (my opinion) it will be a cloud subscription model? I.e. login required verifying your subscription access via cloud server in order to use it. Otherwise, if it isn’t it would be distributed for free like crazy via Android APK File.

Windows Mobile will be discontinued in a few months.

It is obvious that FieldGenius (and I also think Carlson SurvCE) will have to be released in the Android version.

The hope is that they will release a “limited” version that can be freely downloaded from the store, which can be combined with more advanced features that can be released for payment (but not a subscription).

@birdofprey Is this info direct from someone at MicroSurvey?

At first I thought FG in windows will not be supported

. But it still can work just without the lastest and greatest . Same as users using windows 7 on desktop.

ok, that’s no big deal… but where did you get the information about a “limited” free Android version, but advanced features by payment? Is this your opinion or from the developer themselves?

here is the beta sign up link for android
https://www.microsurvey.com/beta-signup-fieldgenius-android-2019/

That’s Windows 10 Mobile which is on phones, not Windows CE which is what most data collectors run. Though either have really been supported in my opinion…

@timd1971 I did some tests with Fieldgenius 10 of evaluation WindowsCE 6.0, with RS2 and it only works correctly at 1 HZ, in 5 Hz the stakeout is very slow. Setting the base to 1Hz and 1Hz the Rover everything works. I can’t try the Android version because I don’t have a Tablet at some point I will

Too bad they have the model wrong, should be Reach RS, not R5, obviously a typo. Hope they get the RS2 “officially” supported ASAP.

@timd1971 here it is for RS+ and Android version lol 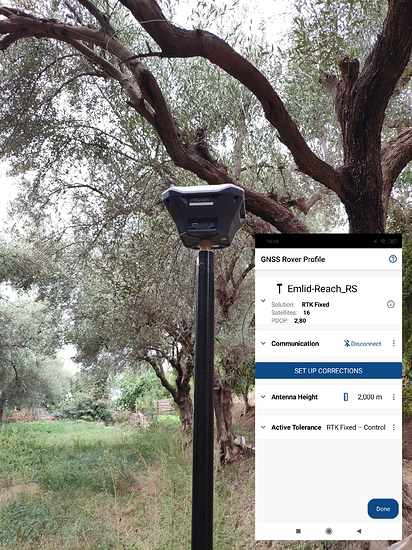 Are you trialing? I’m ready to buy as soon as they say go.