Hi, I begun my tests with the Reach modules today and I’m having some problems regarding the absolute position.

My test consisted on waiting for a Fix on the Rover and them walking with it around an area with a Survey Marker (Geodetic Mark) and going to this mark two times, to test:

My test consist of a Reach module positioned as a Base on a tripod powered by an power bank and another as a Rover, powered by pixhawk (which for the moment is just powering it). Both have a ground plane under the antenna. Its a square with 70mm sides cut on a 2mm aluminium sheet. Both the antennas are at least 10cm from eletronics (Reach module, power bank, pixhawk, etc).

Both Reach modules are with ReachView 2.2.6. Below are some pictures of the ReachView setup (the first two are from Base and the third is Rover): 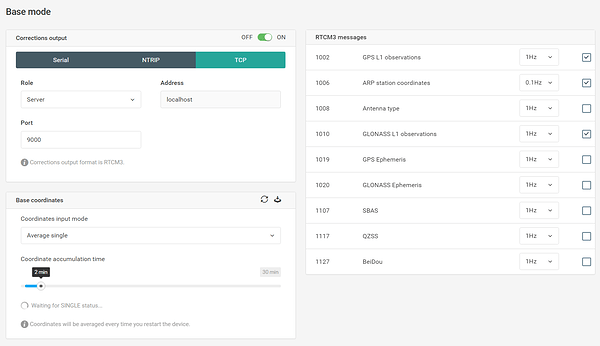 Below are some photos of the scheme and the place where we surveid: 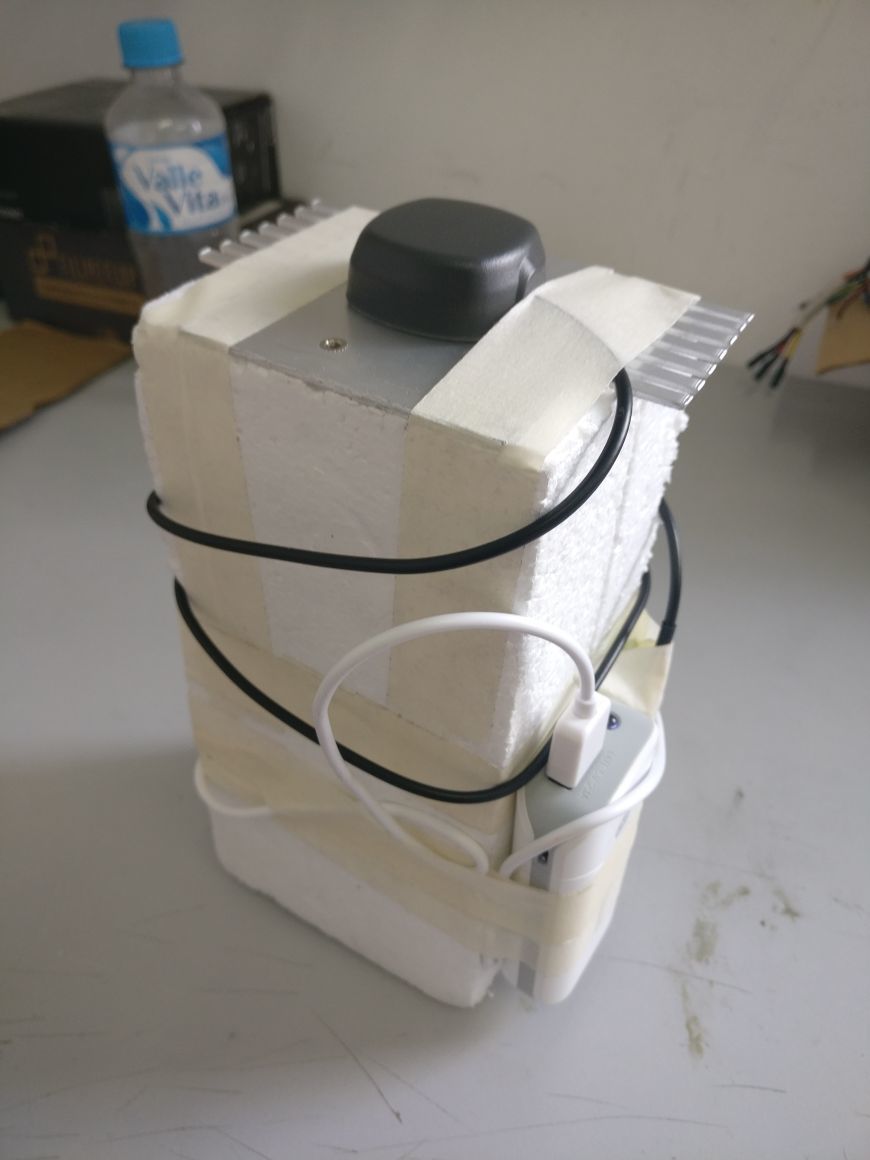 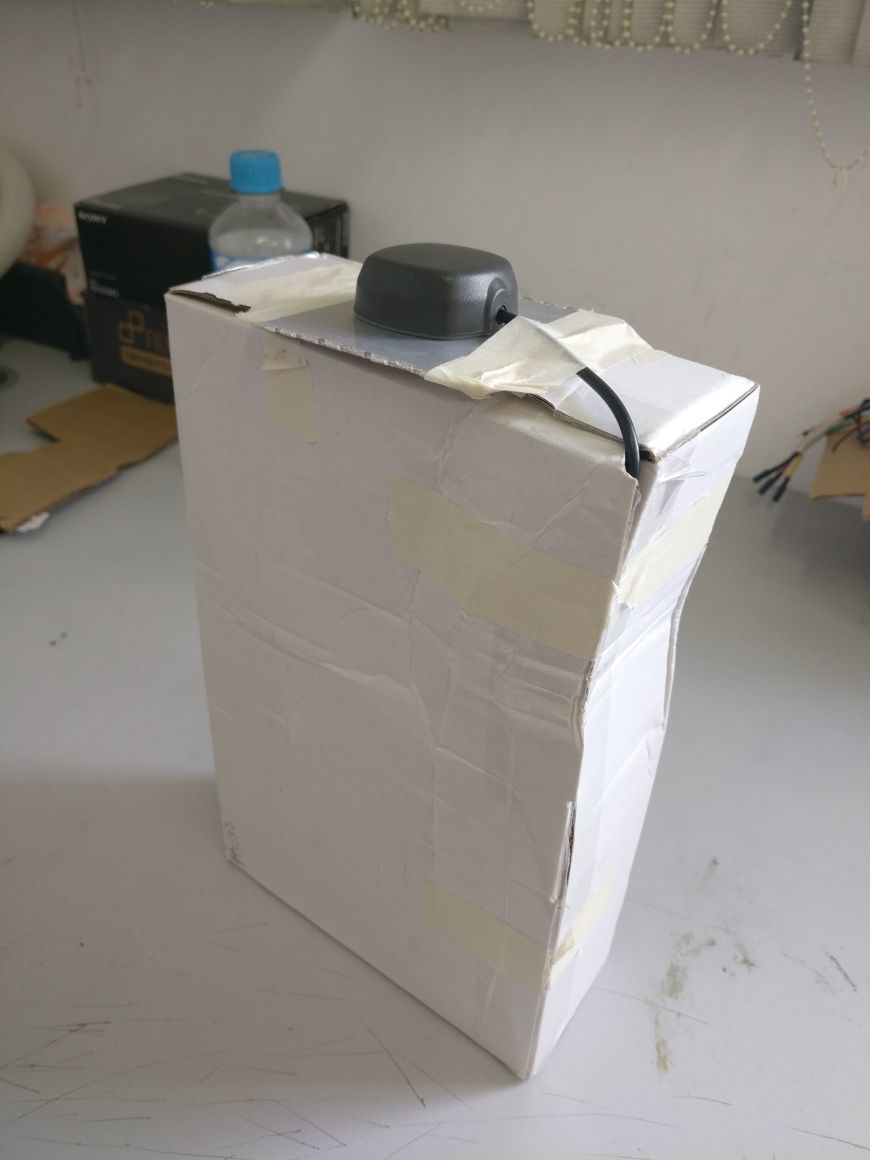 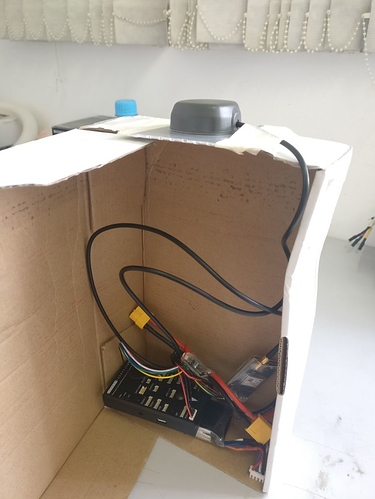 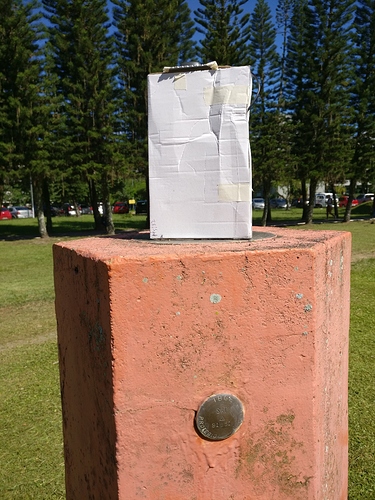 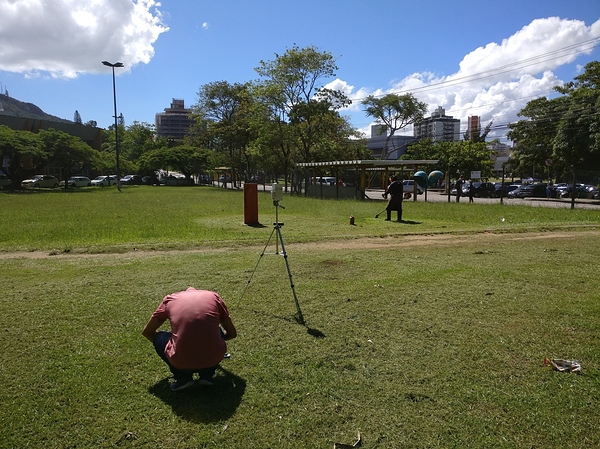 Below are some pictures of RTKplot with the solution: 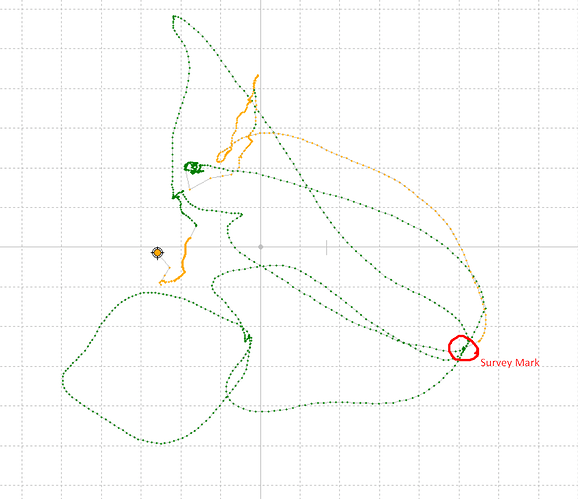 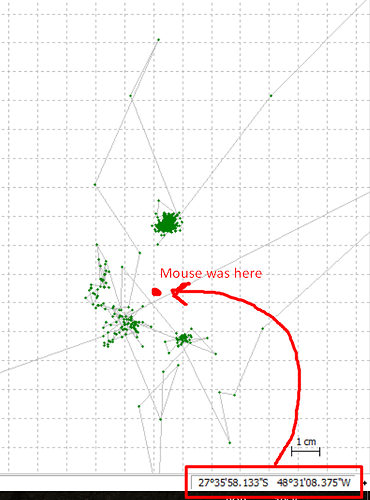 The spot marked on the RTKplot is the place where the Survey Marker should be. The position is:

The sigma (error) for this Survey Mark is 1cm for XY and 4cm for Z.

As you can see by the coordinates, I have an error of about 10m.

Here are the configs I used on RTKpost: 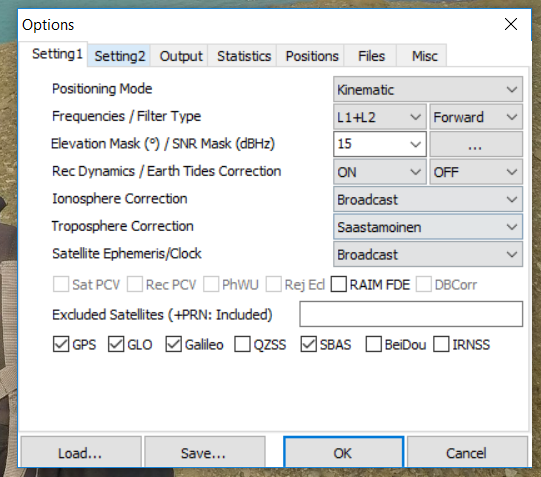 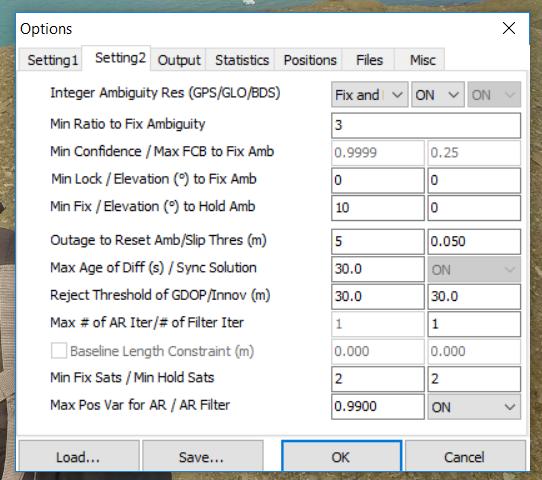 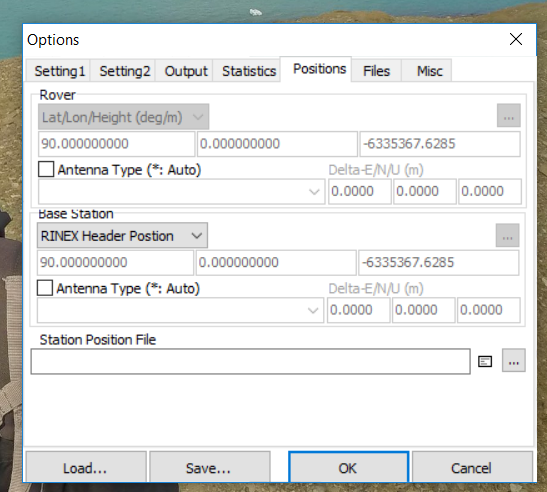 What can I do to get a better absolute position?
How can I attach the Raw Data here?

For postwork:
If your base is placed over a known point and you did record raw, you should feed those into options/position under where it says “base station”. Change “rinex header position” to Lat/long values.

Btw: love your DIY box. It beats mine by miles

About the survey, the base wasnt over the know location. The ideia was to place the base on an unknown place, wait for it to average its position, and then place the rover (which was already with a fixed solution) over the known survey mark to test if it was working properly (getting the right absolute position).

That wouldnt work. Since base average its position, it would feed rover with the same inaccurat info.
My tip would be to place base over known point, fill in coordinates to reach as base and survey with rover to marke a spot for you to move your base. Then you do the process again, place base over new mark on the ground and survey with rover over known point. Now you should get those coordinates that are similar to the ones your started out with.
Sorry for bad language.
Hope you get the idea here anyways

Using the single averaging in base mode for two minutes won’t give you great accuracy. As @TB_RTK mentioned, for absolute accuracy it’s best to either use a known position for the base or survey it first using something like NTRIP corrections.

The single base averaging is mostly to be used with UAVs, when you are interested in relative accuracy.

And how much time do you think I would need to left the base station running to start rovering and get absolute positioning around 10cm? Where I live, NTRIP stations are scarse, and I need to relly on Reach’s data.

Also, Im using “Rinex header position” on RTKpost for base station because when I use “Average single position” i receive the following error: “Error: Station Pos Computation”

How far are you from nearest known point?

We will use it all over Brazil. Its a 9 million km2 country with only 26 NTRIP stations. They can be as far as 250km away from survey.

Have you investigated VRS options?

No, could you explain more?

Also, whats the maximum absolute accuracy you think I could get with a Reach averaged based?

And second link as optional way to get “accurat” absolute position in the midle of nowhere
https://www.e-education.psu.edu/natureofgeoinfo/c5_p25.html

As far as I understood, these kind of network (OPUS) is not available in my country. About VRS, I’ve found only one in the entire country.

About the averaged Reach base accuracy, do you know something?

When you have one Reach unit that will operate as a base, it needs a coordinate. Usually, you would put it over a known location and enter in the known coordinate. If there is no known coordinate, then you can derive one. One way is to let Reach base take an average of single position solutions. This is not where the accuracy of RTK is. The accuracy of RTK is in the comparison between the base and the rover coordinates. So, rover coordinates are accurate in a relative manner, but not accurate in an absolute manner, unless you provide an accurate coordinate for your base.

So, your RTK accuracy will be like 2.5cm relative between base and rover.
Your single-position averaged base coordinate could be 2-4m if you use SBAS corrections. Or 15m if you don’t use SBAS. You could also have your base log file post-processed by a third party, and get even better accuracy for your base coordinate. These are just my estimations and others here may have a better idea of accuracy. The best is to use a known location if one is available.

As @bide said.
Unless you have a VRS system or similar, it sound like you need to make your own temporary point between survey area to make this work.
Unless you will spend hours logging a new point.
Im not aware of any other way to do this long range measure and at the same time keeping the 1-3cm accuracy.
Another good info here about PPP-RTK-DGNSS etc

For many applications, such as airborne survey, corrected GNSS positions are not required in real-time. For these applications, raw GNSS satellite measurements are collected and stored for processing post-mission. Unlike RTK GNSS positioning,...

I stole a pic from that link @TB_RTK because it is so good in showing the accuracy: 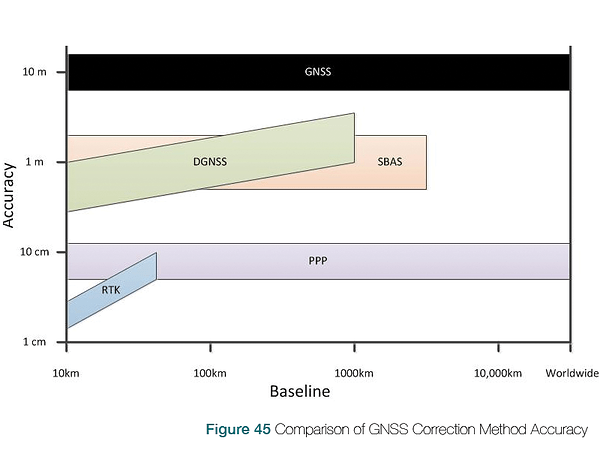 It clearly shows that PPP is the way to go when you don’t have a correction service.

PPP is great when you need to create a new base point in the middle of nowhere (I know what it is, I am in Africa !). But you need dual frequency GNSS on your records, because the base lines used in PPP are huge. In general I end up with 1000km + base lines.
In my opinion, single frequency systems such as Reach are very good for local relative accuracy (let say 20 km around a known point). If you are not in that range of such point, you can average your base position and use it as reference. At least your job will have the correct centimetric dimensions, relatively to this point. But do not expect centimetric absolute accuracy in Lat and Lon everywhere in the world with such a system.
Anyhow, we are always looking for accuracy inside a pre-fefined reference system (localy define by a geodetic monument, a project benchmark or other points network). Absolute accuracy in a worldwide system is a bit useless, as tectonic plates are moving quite fast, i.e a few centimeters per year.

Im starting to understand the whole picture, but I still have some questions. The main one right now is:

@rafael.lehmkuhl a few hours will be ok. Export your record in Rinex format and search for online PPP service.

So for precise absolute position, an post-processing (with PPP for example) is mandatory, even for L1/L2 equipment?