Emlid has been kind enough to provide pre-production Reach RS2 units to a few individuals. My thanks to Emlid for the opportunity to be one of the first to work with RS2 and be able to share impressions and observations about it with the community.

In case you missed it, here is some work already posted by @TB_RTK:
RS2 - The 33/66km RTK session with ntrip/simcard

Let us get right into the important stuff and answer your burning questions about RS2.

1st stop is the kitchen: 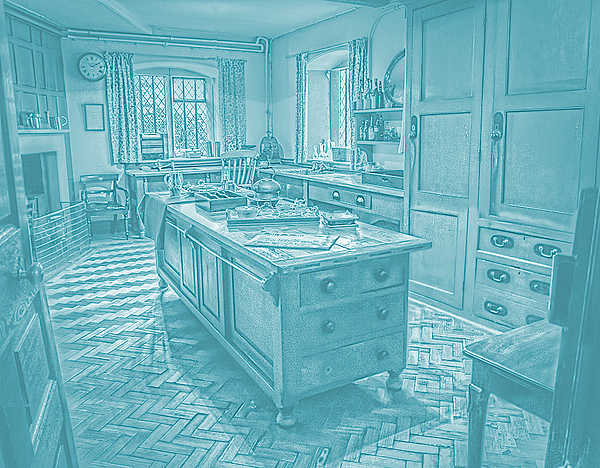 …don’t worry, there is more to come

…and some of it might even be properly serious

…in the meantime, keep a lookout for others posting here in the community forum about their experience with RS2.

The average of the ‘lateral rms’ column is under 2mm:

Yes, and I am going to show how those points line up with the grid once I brush up on my 3D calculus

The grid was definitely not level in that test, so I’ve transformed the points to X,Y,Z ECEF, then from ECEF to zero being the center of the point cloud, and now into inches which should match up with the grid spacing. I think I will try and work out a plane that fits the point cloud and then straighten (transform) it back to ‘level’. After that some meaningful numbers can result from it as in horizontal (X,Y) deviation, and vertical (Z).

Mine does too now. And apparently this is linear algebra, not 3D calculus.

Python with numpy helped me find the best fit plane: 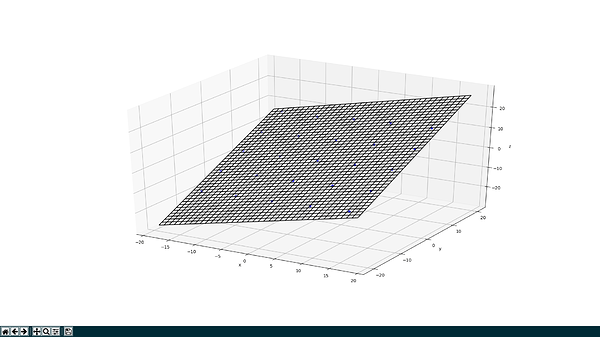 Best Fitting Plane given a Set of Points

After ‘leveling’ the results, these are the errors observed from the 25 point grid survey in the 1st post, part iv:

This test was done with a very short baseline with 2 Reach RS2. They were passing corrections over Wi-Fi at 1Hz with all constellations and all RTCM3 messages enabled.

This is the site. The sky view here is quite good. The grid and rover are on the ground which is not ideal because of increased multipath, but it is a stable placement for windy conditions like today (light wind at the surface and crazy upper winds). 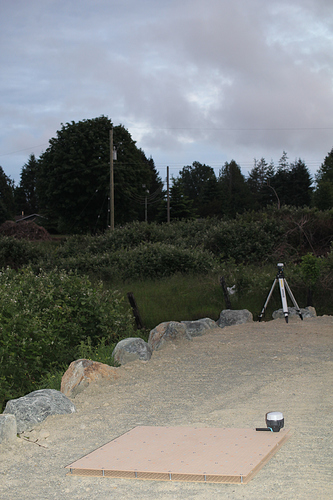 Here you can see the rover sitting in the different grid positions over time. It moves along a row, and then back to the start and down a line, like a typewriter. 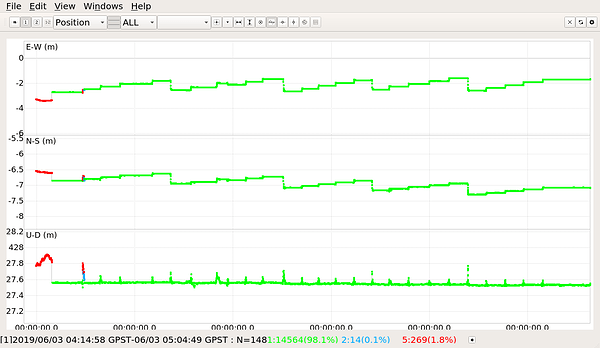 The ground track plot is not very attractive to look at, but there is some value in it. You can see the basic shape of the grid positions I used. There is one point with some single/float in red/blue. That is where I wasn’t thinking and put my hand over top and grabbed the antenna to move the rover. With it so low down, it is hard not to get in the way the sky view even when grabbing it from the side. 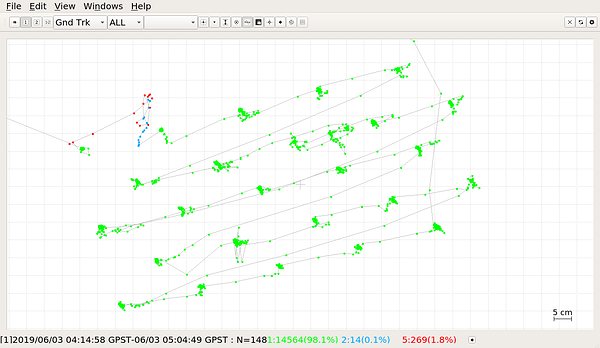 This is a screenshot showing some of the satellites that were in view. 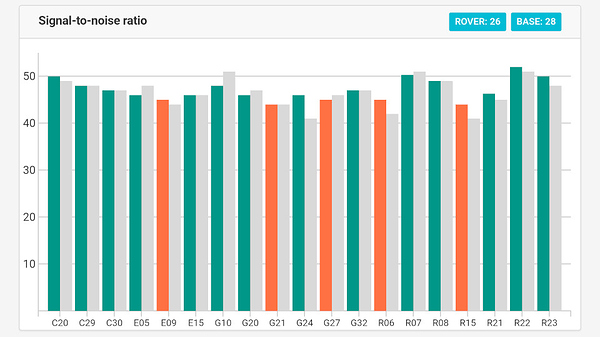 This is the survey project output that was exported in CSV format.

This is a plot of the output. Like previously, the grid is laid on the ground which is not level and it is not oriented in any particular direction. So the point cloud will have to be ‘squared’ to the axis as best as possible… 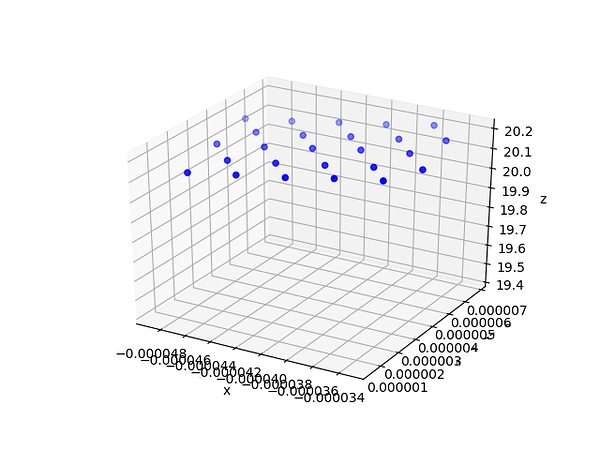 This is a close-up showing that I should really have a short riser for RS2 to elevate it about 15cm (or 6in) and let the LoRa antenna stand straight, but ‘it works’ like this. 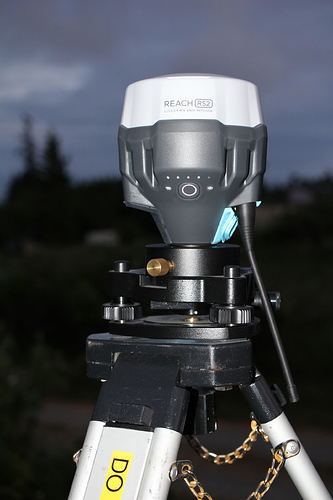 I’m sure some of you will be glad that I gave up on the format used for the 1st post. So am I

That is one Gangster looking tripod, gold chain and all

This is also the same site as grid test #3, except there was an interesting obstacle nearby: 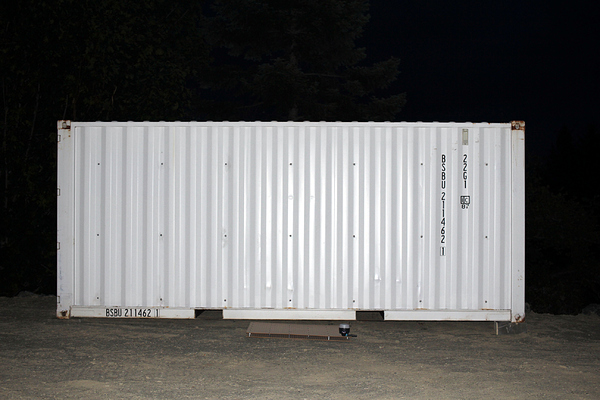 A large steel wall is a pretty good obstacle and generator of multipath signals, especially with corrugated sides.

This was a shorter test with only 9 points. Three furthest away, three in the middle, and three close to the wall. Here is the starting point which is the row that was furthest away: 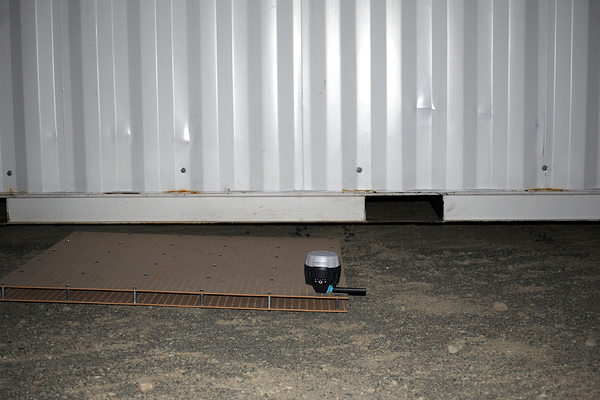 And here is the row that was done closest to the wall: 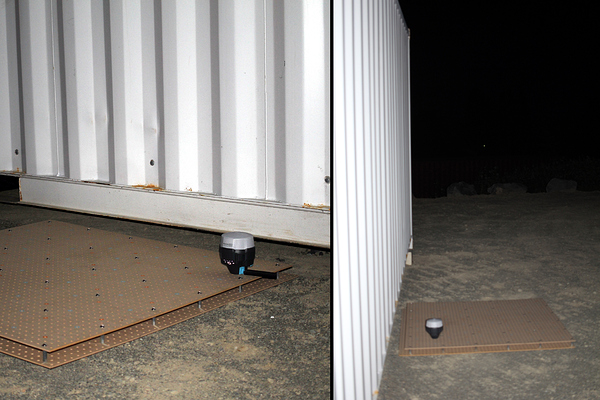 For the survey project, default settings were used for ‘fixed’ points.

These are the points after being run through the script that squares the plotted points to the XYZ axis. It is a bit hard to see the blue dots among the black grid lines: 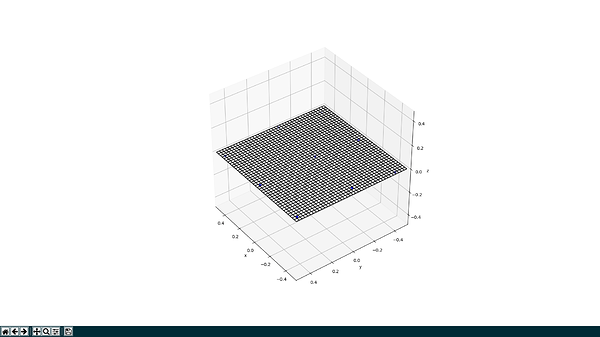 This is the position log in RTKPLOT. You can see me bring the rover to the area at the start, and that I put the rover in the wrong hole once for a short time. Also there was a small offset in the Z axis near the end: 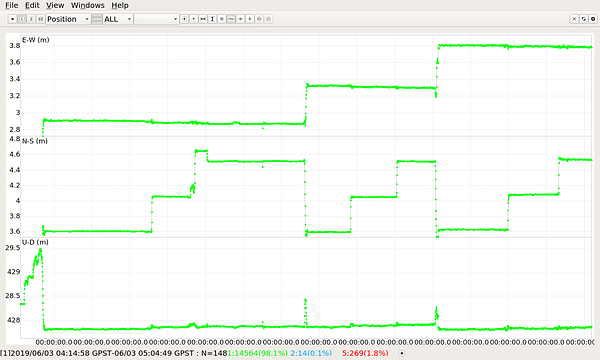 And here is the ugly ground track, also in RTKPLOT. There is not a lot of usefulness to this other than you see the rough grid spacing and it proves that the survey project point collection feature does a great job of turning these green splotches into well centered, cohesive points: 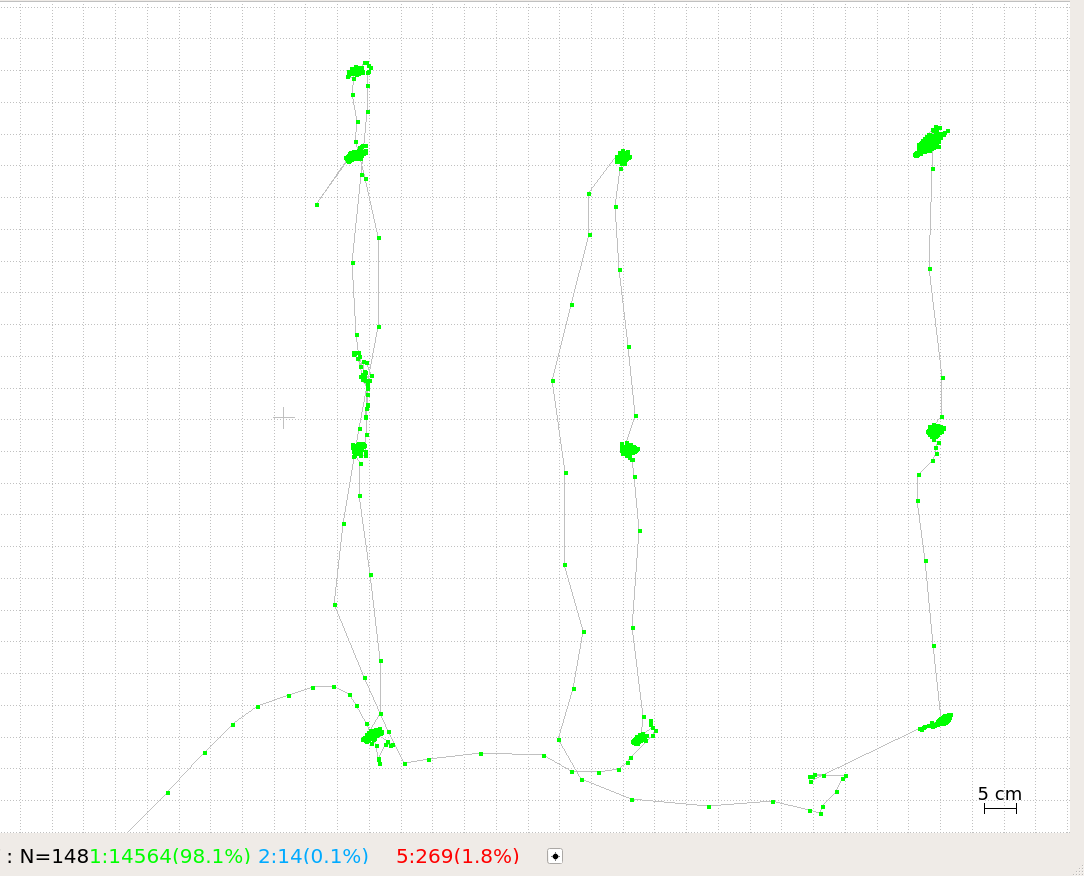 And this is chart of the errors which I think is a pretty good outcome, considering the conditions. I had to re-collect one of the points 3 times before it met the survey project standard deviation tests. It was one of the ones up against the wall. Other than that this was a pretty easy task with great results.

I did this test beside the shipping container just to ‘try it out’ and these results were very encouraging. So I will do some more like this.

It has been a several days since this test was done, but I was struggling with the software script that automates the error calculation. There is 500 lines of completely unoptimized script cobbled together that finds the best fitting plane for the point cloud, then rotates the point cloud on one axis. This is repeated again, along with some centering loops. I want to stress that no scaling is applied though. The point cloud is just rotated to the most flat position on the XY axis and nudged into best alignment then the errors are calculated rawly. The physical grid I use is assumed to be made of perfect 1 inch (2.54cm) squares. So these results should be leaning toward the pessimistic side, and should match up just as if you were collecting points and comparing to your tape measure or laser or the corners of your tile. …because I don’t think many of us here are carrying a reflectorless total station around in our back pocket.

Impressive. I actually didnt think it would perform so well.

Yes, I was biting my nails on this one, and afterward I also took the rover by hand and did a quick walk around the steel container to see if there was a ‘bad side’, but I didn’t find any ‘bad side’. Like I mentioned, more investigation is necessary, but I was impressed too!

Very nice test Bide, as always ! You should add a decimal on your cm table, mm measurement is relevant on such baseline distances .
Also can you try the same with L1 only Reach to show the improvement ?

I like how @bide conveniently drug in that HEAVY shipping container full of RS2’s (or were they fortune cookies?) for testing multipath! Haha! ; )

You should add a decimal on your cm table, mm measurement is relevant on such baseline distances .

I can probably do that when I get a bit more practice with this rig. The table just looked so clean with round numbers

Also, these were just quick and dirty tests with no real planning / preparation / or second takes.

Now I have a system going, I hope to do some more interesting and meaningful tests.

Also can you try the same with L1 only Reach to show the improvement ?

In good time! After some more showing of what RS2 can do! As much as we with M+/RS/RS+ want to see that (and I haven’t even compared for myself yet), I think that there are lots of others out there where RS2 has just come on their radar as something that could work for them. They need to know if it can replace their older name-brand hardware or if they can save money by buying RS2 vs. renting equipment or hiring a contractor for mapping/surveying. I know I’m tolling the :emlid: company line with this rhetoric, but once that part is done, then we’ll solve the curiosities of the other Emlid owners (and myself too)

I like how @bide conveniently drug in that HEAVY shipping container full of RS2’s (or were they fortune cookies?) for testing multipath! Haha! ; )

Actually I have no idea what the container is all about. Don’t tell anyone, but I was tresspassing because that area was easily accessible and had a nice sky view (aside from sitting right beside the container). Of the couple of times I was there, I had a nosy neighbour interrogate me once

and some really strange ‘night folk’ decide to hang out uncomfortably close to me and my gear.

You could do some tests with an RS2 and an RS + with version 2.18.0 and see the times it takes to fix. With my RS + it is faster to be fixed than with any other gps of thousands of usd.