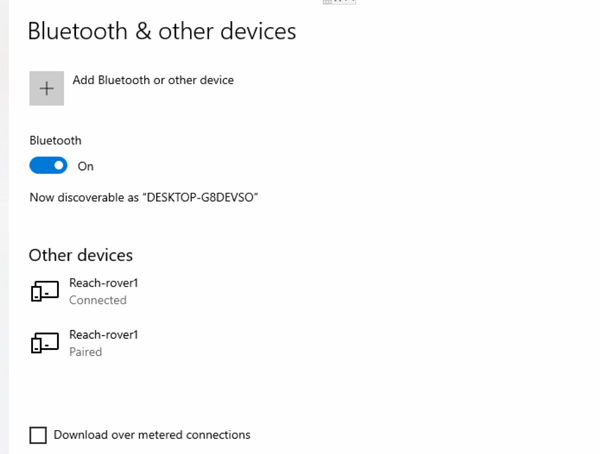 And it consistently changes from “Connected” to “Paired” It creates my Incoming and Outgoing COMS, however in my software there is no communication coming in.

My suspicion is my issue being caused by the two “Reach-Rover1”'s and the dropping from Connected to Paired and looping between that connection.

Any suggestions? Is this Windows or part of a recent emlid firmware update? I have other units with older firmwares that do not have this behaviour.

Let’s dig into what happens. A couple of questions to understand your setup better:

Yes, the PC doesn’t provide a “connect” option like the picture shown. This appears to be the case for the last few FW versions. Simply shows “Remove Device”. All settings on RS+ side are correct and match your guide.

We are working with our original software, which simply reads in NMEA strings of GGA at 5Hz.

I just performed an update on another RS+ unit to 29.2 and seems to work OK. Had similar complication to above at first, but did begin to work. The original unit in question still has issue.

Had similar complication to above at first, but did begin to work.

Had anything happened before it began to work?

The original unit in question still has issue.

Please download a Full System report from your Reach RS+ when it’s connected to the PC, and you see 2 devices in the list. The report contains detailed info on the device’s performance, so it can show what’s wrong. It may also include sensitive info, so please share it via support@emlid.com.

Did you get a chance to download a Full System report? Just wanted to ensure I haven’t missed it in our inbox.

@kseniia.suzdaltseva , this system is in the field and not easily accessible. Will hopefully have to you soon.

@kseniia.suzdaltseva - I’m in the field working with Zach on this; and running into issue again. I’ve reset back to factory defaults on the RS+, updated to 30 beta 1, and the same issue:

Thoughts on next steps? I’ve removed & reinstalled the stock bluetooth drivers on w10, paired & repaired w/ the rs+ via bluetooth pairing process; each time I pair just 1x and w10 subsequently pairs with 2 devices with the same name. Should I flash the firmware?

Spent a few hours troubleshooting W10 bluetooth. It appears that Windows doesn’t fully forget a device from Bluetooth cache, even when removing via the GUI. At some point, I believe I had another emlid device that had the same “friendly name” cached deep in the bowels of WIndows.

With the help of Bluetooth command line tools - work with bluetooth from the command line , I forced removal of the bt devices from the cache by typing
btpair -u

I then forced pairing with the rs+ by typing
btpair -n”reach-newrover” -p333333 [where “reach-newrover” = device friendly name and -p333333 = the Bluetooth pin; both as defined on the device via ReachView3.

I was then prompted in Windows GUI to accept or reject the new device. Once accepted, voila - I just show as paired with one device.

Crossing my fingers that this sticks!

Thank you for sharing the solution! Looks like the issue indeed lay in the cache of Bluetooth devices. If so, it can hardly be affected from the Reach side. But in case you notice anything similar again, please let me know. We’ll be sure to dig into the reasons with you.