I was thinking that Galileo satellite system was not very large but I just read that they plan to have 18 satellite by the end of the year and a total of 30 in 4 more years.

I’ve also read that the more satellite systems an antenna can receive the less sensitive they are overall.

Larry,
The chamber tests that Allen sent me were don on 3 GPS, GLONASS and BeiDou and did not include Galileo. The pattern on the chart shows a very tight signal pattern on all. I wrote Allen back and asked him is they had a test that included Galileo but have not heard back from him. I cannot upload the PDF copy he sent to the forum because that file type is not allowed. He sent me tests on the TW2706 and TW3710 and tells me that the TW3710 antenna is used in surveyor RTK equipment.
Since Galileo will be in an upcoming Firmware Reach upgrade, seems like a good idea for me because our part of Louisiana has pine forests and Galileo, according to my surveyor, puts out a stronger signal.
Here is a screen shot of the main test results page for the TW3710. 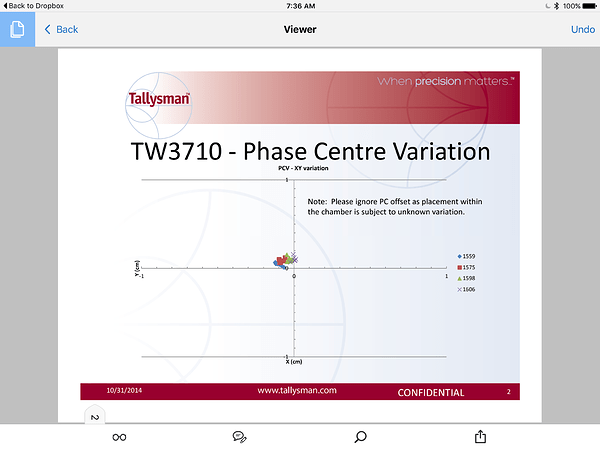 This kind of information is very valuable. I’m glad you are going right to the experts.

Looking at the paths that the Galileo satellites will be on, I’m not sure how good they will work for my area.

Larry,
Essentially, I will be prepared for the future.
Allen with Tallysman sent me this on the TW2410 which has identical response to your TW2405. I am not much help with the attached chart and therefore am relying on Allen’s advice on this one.
My only issue with the TW3710 is the hook up to the rover. Since it would be the center and the rover pole has a threaded connection, how do I get the antenna in the center and still attach the ground plane to the rover without some kind of bracket? I will see what Allen recommends to solve this.
I don’t see much reason to get in a hurry as the kit comes with an antenna to get me started.
I like to solve problems right the first time when possible. 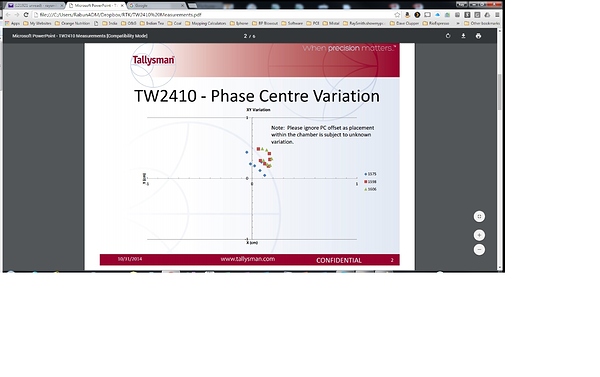 For using the 2405 antenna on my octocopter I will 3D print a mount that has a ground plane and an enclosure for the antenna. I’ve used aluminum foil tape for a light weight ground plane with very good success.

My brother does the 3D printing with Nylon filament so I can have a light weight, very durable mount.

So…struggled to get a fix all day. Got only float, but very accurate float for 10-15minutes 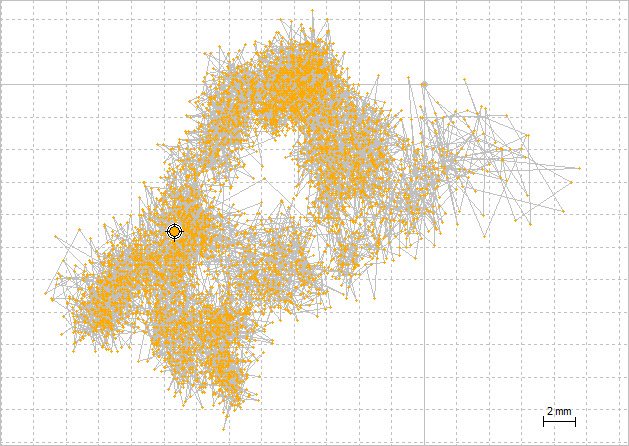 Trying to comprehend the meaning of “integer ambiguity”. Directly translatet to norwegian, this doesn`t give any meaning.
But i think i have far clue whats going on. So, would i be right to say that float is good enough for me?
I only need about 10 +/- cm accuracy when position is relative to base station, and not absolute.

And this is fun too. Cm accuracy with cellphone by the ende of 2020. Hehe
I found this looking for info about integer ambiguity.

Update.
Can confirm that this is working and this is so cool. http://gpsworld.com/rtk-on-a-smartphone-running-autocad-i-did-it-last-week/
I also now see that my previous “problem” with offset is taking care of. 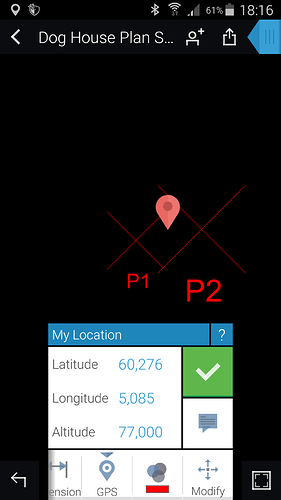 When i testet gps with mock location, i was worried that the internal gps on my phone would mess it up.
But i got my coordinates confirmed to be right, showing me values from my rover and not my phone.
When rover was turned of i would get coordinates way off from where i actually was. When rover turned on, after a couple of seconds, coordinated dialed right in on the spot where rover was. Watching the dot on autocad dial right on the spot was just wicked. That is so impressive

After adjusting for glonass and other minor tweeks, reach got fix much faster and in areas where i before couldnt get fix.
Ref. this post - GNSS live map - Planning best reception? or avoid a bad time

But as you can see from the background, status where showing or not showing anything. Troublshooting for this i found out that reachview is out of date, running verion 0.2.2.
Hopefully this fix thing right next time.

Could you try clearing your browsers’s cache?

Control + F5 will clear the page’s cache as well

Then on your Android phone:- Use Lefebure NTRIP Client (https://play.google.com/store/apps/details?id=com.lefebure.ntripclient) to connect to the bluetooth stream and send a mock GPS location to your phone- Use Mobile Topographer Pro (https://play.google.com/store/apps/details?id=gr.stgrdev.mobiletopographerpro) to store, import, and stake out points as well as moving data. The app is pretty great with on the fly CRS translations, the abliltiy to apply offests, name points, and export to a variety of formats.I think using this combination, we have a fully functioning Land Surveying tool.

Hi luke,
That is awsome, but does the topographer receive fixed coordinate? How to connect topographer to lefebure?

It`s all related to the above info and my goal to use Reach for survey anything.
I finally got some time to test my gear and also got my self a provider for correction. Local ntrip from Kartverket

My goal is to open my workdrawings with fields coordinates and info on my autocad360 app on the phone and survey points to the ground on our contruction site, all this with Reach in a plastic lunch box

So, this time i made a square mark in arhicad, it`s 2000x2000mm and is geolocated with local reference as you can see from the image below. Once this drawing was done and some other points where placd, i saved this as .dxf and open it up in autocad360 to check everything looks ok.

Next thing was to connect reach to ntrip which provide VRS baseline and cm accuracy. My location is not that good so i did expect the worst. After some adjusting with the setting i got up grey bars, Yay. Now i had to wait about 10min with pretty accurat float before fix nailed it and stayed fixed for over an hour continuesly, Awesome. Se pics below.
With bluetooth enabled and connected with GPS bluetooth app, i open up autocad360 to manually set the reference point. I know my dxf drawing was geo refered by i didnt wanna hasse with that now. So with known point i set my location and can see my self walking around in my drawing and the 2x2m square drawing to stake out. I made a screen record and uploaded it to youtube for you to see. You can see how a adjust scale in autocad to precisely navigate the rover over the point. Now, the ground was not level and rover was mounted on a tripod which made the stand not perfect vertical, so some inaccuracy in this metod but my point is proven. I think i got the most of it and all i can say is that i am impressed by the level of accuracy from Reach. Im very saticfied and i`m gonne work on routine and workflow to make this my favourite tool.

I have one obstacle left, and that is to find a way to know when reach is in fix/float mode, because with autocad open i can`t see is the coordinates is fixed or not. Any idee here?
I did read something in docs that green light flashing on reach meens fix, but i think mine is blinking green in float and fixed mode. Anyways, here are som pics.
You can see from the image where i have marked the ground while surveying in the youtube clip. 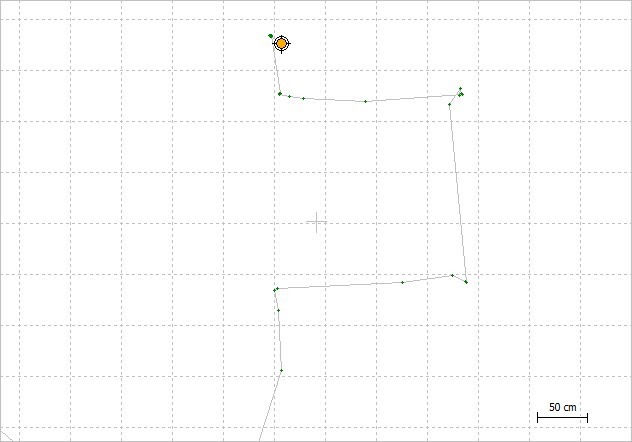 On the image above you can see how rtkplot is logging my movement when trying to marke my 2x2m square drawing. 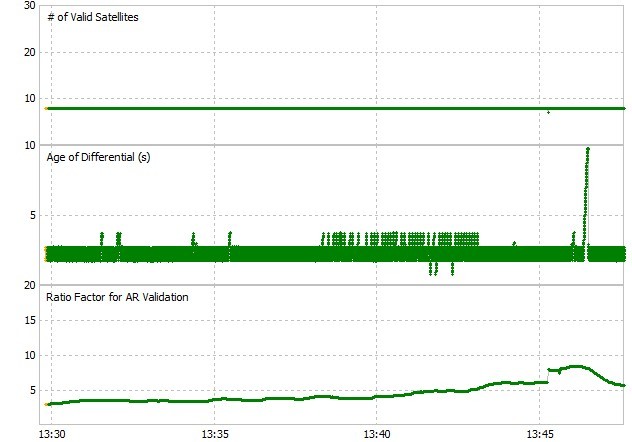 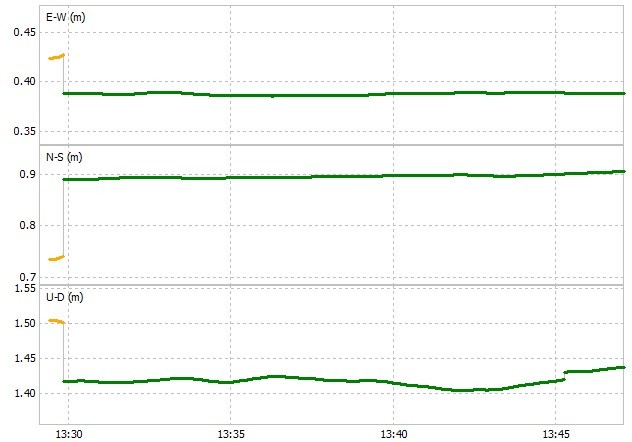 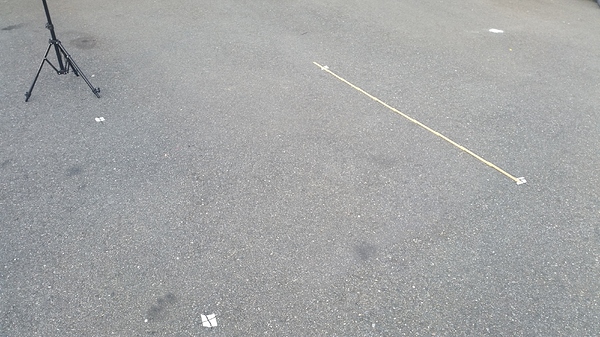 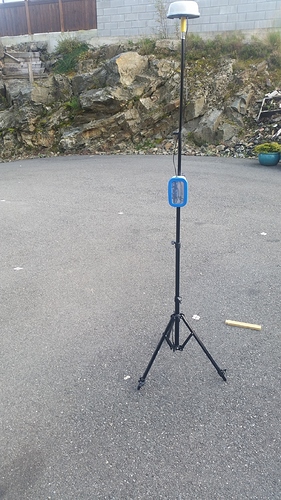 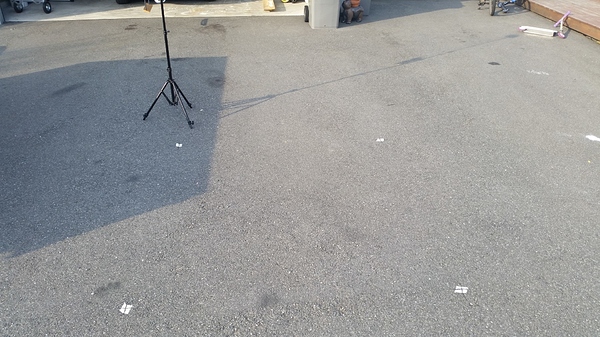 A final note about autocad360 that is worth mentioning. Reach View or Other Surveying Software

On a general not about autocad360, my experiance is this: -If file is not geolocated properly and you need to set a point on drawing as “set location”, you also need to be aware of north direction and ppm deviation. In my case i use UTM32 and...

Just upgraded my pole with tablet holder for cars, and a soft case for my phone. Glued the case to the rig.
Now i can focus at getting the job done and not be afraid of losing stuff to the ground 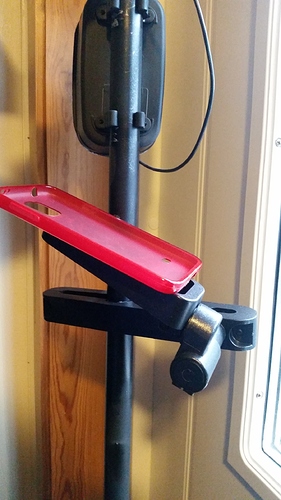 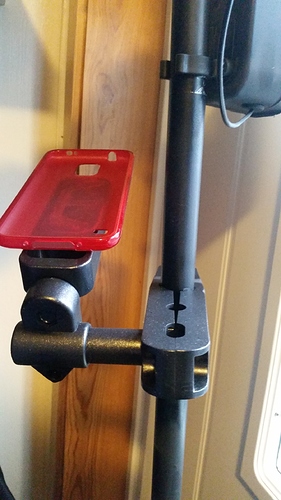 Is this a tripod or monopode ?
I made survey with triggering an interrupter which log my waypoint on reach like hotshoe flash

Neither? I guess mono is the right term, but i have a tripodversion for base
Its a teleshaft for painting etc
http://www.jordanvethvordan.no/produkter/verktoy/forlengerskaft/ultimate-ekstra-langt-forlengerskaft-115-270-cm~p14455

Do you have a link to this setup of your?

Not yet but I will post when I have time …
So what I don’t understand if you use monopod is how could you stay recording your survey point with it. It’s impossible. In the past I used Trimble equipment with bipole like this : 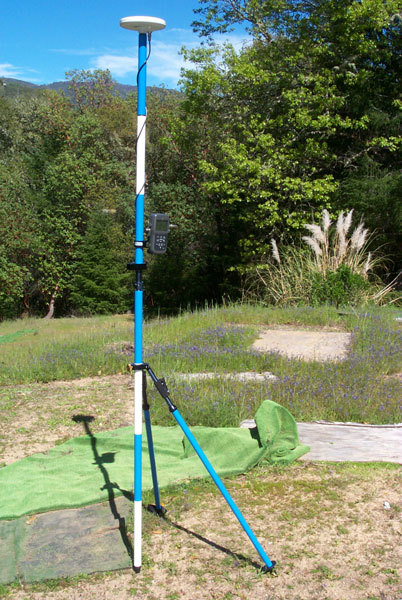 Do you have a bubble level embeded ?

But this mono-bi-tri-pod are very expensive. I try to low cost this

Ok, i see. Are you surveying in other modes, static?
I usually dont spend more time then few seconds during stake out or collecting points.
If i for some reason need to stay longer i use a tripod with 3 adjustable legs (this one).
Both setup have bubble level. Pictures of setup further up this thread.

Are you thinking about accuracy when you say its impossible?