Hi, new to this forum

Just bought Reach kit (backordered of couse, but hope you stock them soon?)

So, in teory i think i can get this to work.

Pri.1 is to get the rover give me a location/reference value from one point to another on the field or on a building site.
2. Map locations/points from survey to CAD program for reference and personall control over coordinates
3. Run log directy on another software like autocade 360 or similar, Ref this site - http://gpsworld.com/rtk-on-a-smartphone-running-autocad-i-did-it-last-week/

This is it for now, i`ll update this tread as i probably will have a bounch of questions and share experience

1 Like
What can Reach do for me as an engineer/surveyor
Help needed linking phantom 4 to Reach for accurate gps coordinates
Reach View or Other Surveying Software
TB_RTK February 11, 2016, 5:50am #2

Hi, havent found where the center of position Reach is. Does anybody have a spec for this on the antenna module?

And a second question, is it possible to set an offset to base coordinates? Couldnt find that either. Btw, got my reach kit today, and im so exited to start digging into its features.

Thank-you for your interest in Tallysman's antennas. The ARP (Antenna Reference Point) for the TW4721 is the bottom of the antenna. This antenna has not been calibrated by NGS nor by IGS, therefore there are no .atx files available. The data available on Tallysman's website shows the PCV measured by an independent lab using a Satimo chamber. Unfortunately, one cannot rely upon the PCO since the antenna wasn't accurately centred in the chamber.

Linking up this thread as it`s right up my ally. Sending RTK data through cell phone hotspot

I`m also considering a ICE router in my car for convenience. Not sure if this will make it easier with VPN/SSH.

And a second question, is it possible to set an offset to base coordinates?

If you use your second Reach as a base station, you can just manually enter altered coordinates.

Hi,
I`m not sure i understand. But I wish to place my base at a known position with coordinates, but at that spot there is no gps signals so i have to manually ad an offset to the nearest position with gps signal. It is just a couple of meteres away.

Maybe you can take the coordinates, calculate the offset, then reenter them into Reach?
At the moment, I don’t think we have a better solution.

You will have to do a bearing and horizontal range from the known position to the new position and calculate the COORDS.

Use this tool to get the new coords - http://www.ga.gov.au/geodesy/datums/vincenty_direct.jsp.

Obviously if REACH could do an offset, the bearing and range would still need to be measured. The REACH would have to use the formula like in the above conversion (Vincenty formula) to come up with the new COORDS anyway.

There are other formulas and programs to do this but this works for me without using mapping software.

Thanks for great tips.
Still, i need to do it simpler then that in the field. Bare with me for a second and show you what i mean.
We use X/Y coordinates which is metric unites and easy to understand and apply directly doing field survey.
All post and after processing is done in Archicad,so its easy to calculate A to B and so on. But working with fieldsurveying, and on site we usually have at least on known point which we could refrence/measure from.

The scenario is, we need to find or set out points/marks on the ground where a building should be based on existing refrence point nearby. And in Archicad we have a drawing with the same refrence point and our building with a certain distance, so, all fine until we get to the site and there is no gps coverage or there is an ubstacle that force us to move our base and therby alter the value we had from refrencepoint to building.

What we have done before (see fig. below) is

Mmm let me get this straight.

I thought ARCHICAD the origin could be reassigned or move the entire model by the offset amount? Is this correct? Or am I missing something?

And yes, everything is simple to change in Archicad but not when er are in the field were we dont have Archicad

With offset this could be used both ways. 1 to use with uknown refrence point or 2. to create a peg/point in the terrain that has no gps coverage or is in such a bad place.

NB! this post has som funky bug with the numbering of post that i cant figure out. 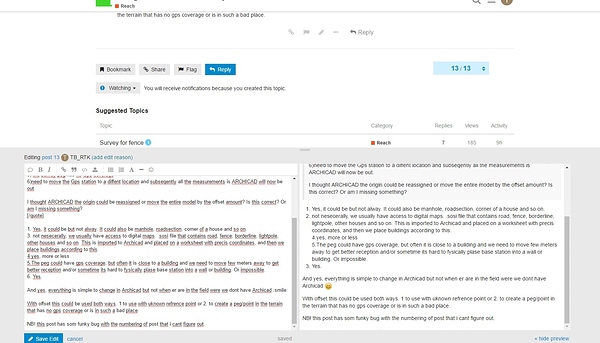 I just had a brief look at the RTKNAVI windows version - I think if you play around with the antenna delta offset settings in the options tabs I think that may help what you describe.

I have not done this myself but if you offset the antenna it should work.

I just had a brief look at the RTKNAVI windows version - I think if you play around with the antenna delta offset settings in the options tabs I think that may help what you describe.

I have not done this myself but if you offset the antenna it should work.

Nice, i`ll definitly take a closer look once i get my surveypole ready. Thank you

Addit: I after playing with this - it is quite easy, under RTKNAVI>Options>Positions - Base Station, Set the base station coordinates as your datum or the origin in archicad, Now the the crux --> Tick the antenna type (leave blank unless you have antenna calibration file) then adjust the (E)astings (N)orthing ie X,Y difference from your datum/archicad origin.This differences have to be in the North and East grid directions.

I have been using the Reach a lot recently. I have just got back from a very big survey job, measuring ground water monitoring well elevations with the Reach. The spread of well locations was fairly large with many obstructions about. NTRIP was not an option as the closest CORS was 150km away. So I post processed all 90 odd observations, each observation lasting 30seconds. Each point was cheacked by a third Reach device. The results were as always excellet with a maximum difference of 15mm between solutions.
But this mission of post processing 180 individual files lit a fire under me to get testing with the bluetooth ouput solution. I found really good results with the following combination:

Have you used Reach to survey near other buildings? Any issues with the accuracy from multpath?

For sure, multipath is an issue, not just with Reach but with all L1 only receivers. Not just buildings but any elevated structures like trees, fences, etc. Remember that Reach has been designed for aircraft where multipath is almost non existant. But on the ground, you just have to be more careful of where you measure, and use your brain a bit. If the software tells you that you are getting a 0.01m fix in an urban jungle, there is something wrong, but over time RTKLIB will identify this and recalculate an more realistic answer.

I recently measure a site for groundwater monitoring borehole elevations and had to include the building corners on my plan. I just lifted the antenna on the pole on top of the building corner and did my observation as normal, noting the height difference by measuring with a tape measure from the antenna to the ground.

The trick is to have long observation windows, do them in open places, have your base in an open place, use a ground plane and check your measurements. Following these will give you greater piece of mind and accurate results.

Luke,
Thank you for posting your experience in setting up your surveying system. I would like to ask you to explain further why you used the 3rd reach device and how it worked out for you?
Another question, how can I output via Bluetooth to my iPhone/iPad since I do not have a droid device?