Hi,
I’m working with a Trimble FM750 as my rover while using an Emlid Reach RS+ (v 26.3) as my base. Using the Emlid Ntrip caster I’m unable to sustain a fix signal.

In North America does this setup work? The Trimble unit is unblocked to accept RTK and various GNSS inputs.

First are you outputting 1008 in the legacy messages? Trimble requires this.

Also GNSS for Trimble normally means GPS and Glonass only so disable all others. @jp-drain-sol will chime in sooner or later, he has the most experience with this.

I started with trying to get corrections for a cfx750, but ended up getting an OEM board before emlid implemented their legacy corrections.

Thanks @PotatoFarmer. I’ll try this first

@PotatoFarmer, do you know if the legacy messages are only available on RS2 units, or is it possible on Reach RS+?

It looks like legacy messages are only covered in the M2/RS2 docs, so my guess from the manuals is probably not available on the RS+.

Compatibility issues, unlocks, and planned obsolescence are the reason I have dumped Trimble. AgOpenGps is only a headache for the first install, then its pure profits.

@PotatoFarmer, you’re using AgOpenGPS as your guidance then instead of Trimble? Very interesting. Does it link into AutoSteer systems at all?

Some tractors like Fendt they have the steering PGNS’s, so it will steer a steer ready Fendt over canbus.
Most use a self built steering wheel motor and gear arrangement easiest and cheapest, others drive a hydraulic steer valve directly.

The whole point is to dump the main stream guidance systems. An AOG set up as fancy as possible is about $3k cdn. There are many who have built it on far less money. Most of the budget is tied up in the windows tablet, and two rtk gps modules but those are moved between tractors, as well as the steering box. The parts left in the tractor are quite cheap, especially compared to an easy steer motor.

My steering accuracy with rtk is +/-1cm, and it even does end turns.

I haven’t attempted Emlid’s NTRIP caster with my Trimble equipment.

If the RS+ isn’t putting out the 1008 message, then yes that is your issue. If you want you can inject a blank 1008 message using an Arduino Nano but I am not sure how you feed that data to the Emlid NTRIP caster. I know how to do it with other casters that are local to my PC.

Where are you from? If in the U.S. and your state has a CORS network, there is another simple option to receive RTK corrections that cost less than $200. It uses a Bluetooth adapter that is plugged into the back of your CFX750, and an Android App on your phone running Lefebure NTRIP. Very simple to setup.

As far as I know, Trimble FM750 has an AG25 GNSS antenna, which is multi-band. So it requires multi-band corrections for RTK.

As Reach RS+ is single-band, it can provide you with L1-corrections only. That’s why you can’t get a Fix solution. You need to use a multi-band base, for instance, Reach RS2.

The Trimble unit is unblocked to accept RTK and various GNSS inputs.

Good catch. The only signals a FM750 (Actually a CFX750 from Trimble, FM750 from CNH) can receive are US and GLONASS.

Hi @jp-drain-sol, the legacy messages was definitely the solution to at least get RTK fix to the Trimble 750. What we’re now seeing is a low number of satellites when we have an RTK fix. When the fix drops (which we’re not sure if satellite issue or not), but the number of satellites does increase up to 20.

Any thoughts on this? Could it be a setting in the Trimble? Could adjusting the SNR mask on the base fix this? 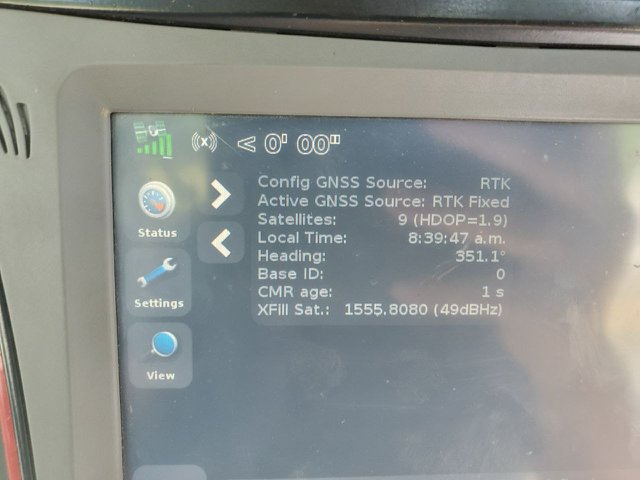 I had issues getting the GLONASS to work with my Trimble system. If I had the time I would tinker with my system. I’m in my busy season right now so not much spare time. I think that is why you’re seeing higher satellites with WASS and not RTK

If I have time to check my notes I need to see which GLONASS messages trimble is using.

The FM750 does not guarantee that you will get Glonass, there is an unlock for that too… only $616USD to unlock only Glonass… Really Trimble?

Find many great new & used options and get the best deals for Trimble Passcode ONLY, CFX/FM-750 Enable GLONASS at the best online prices at eBay! Free shipping for many products!

Buddies CFX750 is the same even off of a genuine trimble base, he has RTK unlocked but not Glonass. That’s why we are running away from that dumpster fire and switching to AgOpenGPS.

I am vary aware of the unlocks and their prices from Trimble. If you think that is bad lookup enabling GPS2 to RTK on a TMX.

Since he reported 18-20 satellites in WAAS it has to be unlocked. Most I have ever seen without GLONASS is 12 or 14.

I was using a FMX/FM1000 (RTK and GLONASS unlocked) with my M2 base/radio setup. When fixed, I was only tracking 8-12 satellites. According to the Trimble Online GNSS page, I should have had over 16. I was in open condition, no obstructions. When I checked which satellites where being used in AgRemote, none where GLONASS.

I haven’t been back to my project in some time now. Sometimes, life gets in the way.

We’ve released a new Reach Firmware 27 update. It’s now available for all devices and brings some valuable features and improved stability. Support for SIM Cards with Authentication You can now set up the Mobile data connection using M2M SIM cards that require password authentication. To configure the connection, enable data roaming on your phone or tablet and go to the Mobile data tab in the ReachView 3 app. Then enter your APN (Access Point Name), choose the authentication type and fill in y…

The last thing listed on improvements, might be the ticked needed.

Just an update that we did succeed with a 45km Baseline officially last night, never lost the signal. The biggest difference was the base station was placed on top of a shop with a much stronger wifi connection.

@jp-drain-sol, we’ll give the additional message a try and see if that does any further improvement.

With NTRIP, you shouldn’t lose signal unless you lose internet.

How many satellites where you tracking? I am assuming just the U.S. not GLONASS. I am hopefull the new version permits our Trimble equipment to utilize them as well.

Good move, the base is imperative to see full open sky, if you cannot see the sats you cannot send corrections for them. Having the Base GPS antenna in an open area above buildings is a important step.

To even further improve long baseline performance learn to PPP (Precise Point Position) your base. It takes 12-24hrs of recording rinex data, then wait two weeks and submit to Nrcan to get the most accurate results.
The more accurate the base coordinates the lower the dilution error on long baseline measurements. Its easy to do this with Emlid, No extra unlocks needed!

Then never move your base antenna, and never change your input coordinates. You will be able to grain farm as accurate as a vegetable farmer, on the same tracks year after year.

Thanks for the discussion!

As @jp-drain-sol mentioned, on the 27 stable firmware, we added support of the 1230 RTCM3 message. It contains code-phase biases for the GLONASS constellation. This message may help phase ambiguity resolution on some 3rd-party receivers. As a result, the number of satellites used in calculations increases, the solution becomes more stable.

Please note that such an option is available on Reach RS2 and Reach M2 receivers only.

we are using an emlid rs2 for base station and going through caster and our rovers are a trimble 750 and a fendt with a trimble reciever and factory auto steer
on the reach base app on base mode tab where we select which messages rtcm3 and legacy messages the base sends out to ntrip what should those be set at could someone specify, should they all be set to 1hz or more or less …