Sudden crash in the middle of autotune process

Hello, I’ve been building a hexacopter with my team. We’ve crashed a lot of times becuse this is our first time building a drone. This forum and some others were useful for us to solve our problems so far. But this time I couldn’t find a similar crash/problem. Here are some information about our setup;

Other crashes before the last crash;
We have tried to fly the drone severaly times in both stabilize and alttitude hold mode. The only reason of these crashes was that while flying drone suddenly tilted a random way and kept flying until I disarm the motors in the air.

Exactly what happend in the last crash;
We prepared the hexacopter for another flight. Tried to take off slowly in altitude hold mode. The drone took off in altitude hold mode again, I raised the drone about 3 meters from the ground. It was pretty stable and I started the Autotune process. About 2 and a half minutes everything was fine. Suddenly drone went to right very fast, I tried to bring it back, the drone stopped about 2 seconds later, it did a 45 degree ccw yaw and 3-4 seconds later it went crazy and moved forward upside down until it crashed to the ground.

What we’re asking for;
We aren’t sure about why drone crashed last time after 2-3 min flight and we need help about that.

Note: Power distribution board is just beneath the Navio2/Raspberry pi, this causes magnetic inference and we did a compass motor calibration. This might be our problem but we aren’t sure.

Picture of the drone; 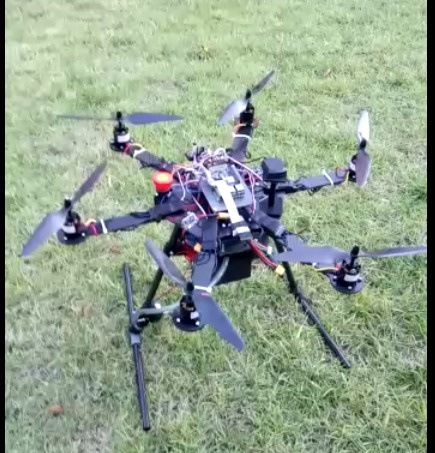 I’ll examine your logs and will let you know of anything I find.

Thank you for sparing some time to examine my logs, I’ll be waiting for your help.

had a brief look at the data and noticed a few things:
a) Sudden vibration which can cause problems with sensors. - Have propellers been balanced ? It looks like the arms on your drone are flat ? - If so, bad idea,…this will cause vibration during flight as the arms move up and down. Better to have round or at least rectangular arms.
b) Uneven motor controls / power settings detected. - Once again could be linked to flexing of arms and controller trying to make up for it. Or do you use different ESC’s or different power rated motors?
c) There was a problem with the mag field. Hence compass readings unreliable. - Keep anything like ESC’s, wiring, antennas well away from Navio2 as it will affect compass. It also appears on your photo that your using the Pi camera ? If so, it is known to cause issues with interference. - You will need to shield cable. Better still remove it altogether for initial flight testing until drone is flying stable.
d) I had also significant problems with same version of Arducopter as you are currently using.

I agree with Karl’s suggestions. Your drone has a rather dense setup, so there’s a high chance that some devices cause interference and affect sensors. Especially the Raspberry’s camera that emits a lot of radio noise.

According to logs, your compass readings are highly affected by the servos. It can be a good idea to add shielding to your ESCs and wiring. Additional shielding can be added between the PDB and Raspberry.

Also, it’s difficult to judge from the image, but if drone’s arms are too thin, they might tremble due to the vibrations, even though they are short enough.

I would try to isolate the main sources of RF noise and remove the camera during the next testing flight and check if the drone behaves the same way.

Hi @mikhail.goryachev, I`m also facing compass/mag field issues.
How do you recommend shielding the PDB and specially RPi? I searched in navio2 docs but I couldnt find anything about that.

I’ve posted in your dedicated thread.