I like the navio as autopilot, cause it put together the autopilot features + computer capabilities. So we can have a linux in the air.
But I almost giving up from Navio and going to other FC like CUAV V5+ or something like that.
The reason is the problem to get consistent Compass and GPS readings.
In first tries with navio, I was using telemetry signal over LTE modem (usb stick), but I thought that was the cause of bad readings. So, I put the modem far from FC about 20cm over a USB extension. No success. I removed the LTE modem, using telemetry directly over wifi. No success.

I though the bad reading could be caused by noise from BEC and tried to replace the BEC: No Success.

Can anyone help me to find some thing in my setup that can be the cause of unhealthy GPS Signal and check Mag Field messages? Or should I give up from navio and going to other FC?

Pics from my setup:

After looking at pictures of your setup, I have several suggestions on how to improve the situation.

May I also ask to check the compass and GPS performance when the flight controller is detached from the frame? This might help exclude issues with the GNSS antenna and the board itself.

Also, it’ll be great if you can share some logs from your drone to examine.

Hi @mikhail.goryachev, thanks for your help!

Follow a log from a short flight I would tune the hexa. But I couldnt due to many instabilities.

In fact, that wasnt a flight! That was a FIGHT with the copter

Hi,
in regards to poor GPS signal I’m not really surprised.
Yes, it is a good idea to keep GPS Antenna away from anything that could interfere with reception, but if it is far from the center like in your case, it will suffer large movements as the drone moves. Given how weak the GPS signal is it doesn’t take much to interfere with reception. Have noticed in your flight log that GPS signal is getting worse during flight, rather than better as it is often the case after more time since startup has passed and more satellites are being locked in by receiver.
Even after 8 years of flying and building drones I still get sometimes surprised how easy it is to have a sensor or GPS reception messed up by some other device. - Had once a servo for camera gimbal cause interference issues. Solution was to use a suppression sleeve on servo cable.
In my experience in regards to GPS antenna: Higher up than rest of equipment -yes. But in regards to position close to to center to avoid large movements. Out on an arm or even under - No.

Today I tried new copter modifications, believing that Navio2 board can give me a good experience (while the new FC CUAV Nora I bought does not arrive).

I made @mikhail.goryachev recommendations: moved the Futaba Rx and antenna to under the copter, looking for decrease RF over Navio2 board. Installed the GPS antenna over a metal plate (@anon31534460 next time I will move GPS antenna back to center plate of bird). 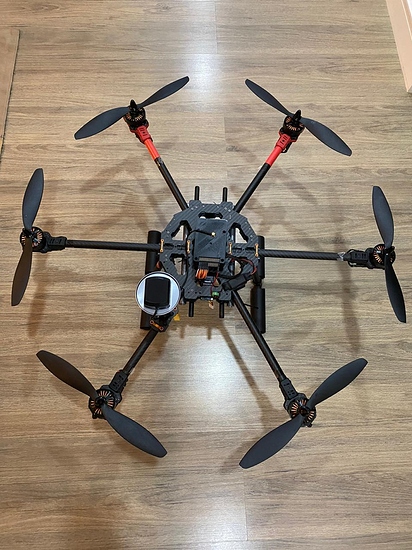 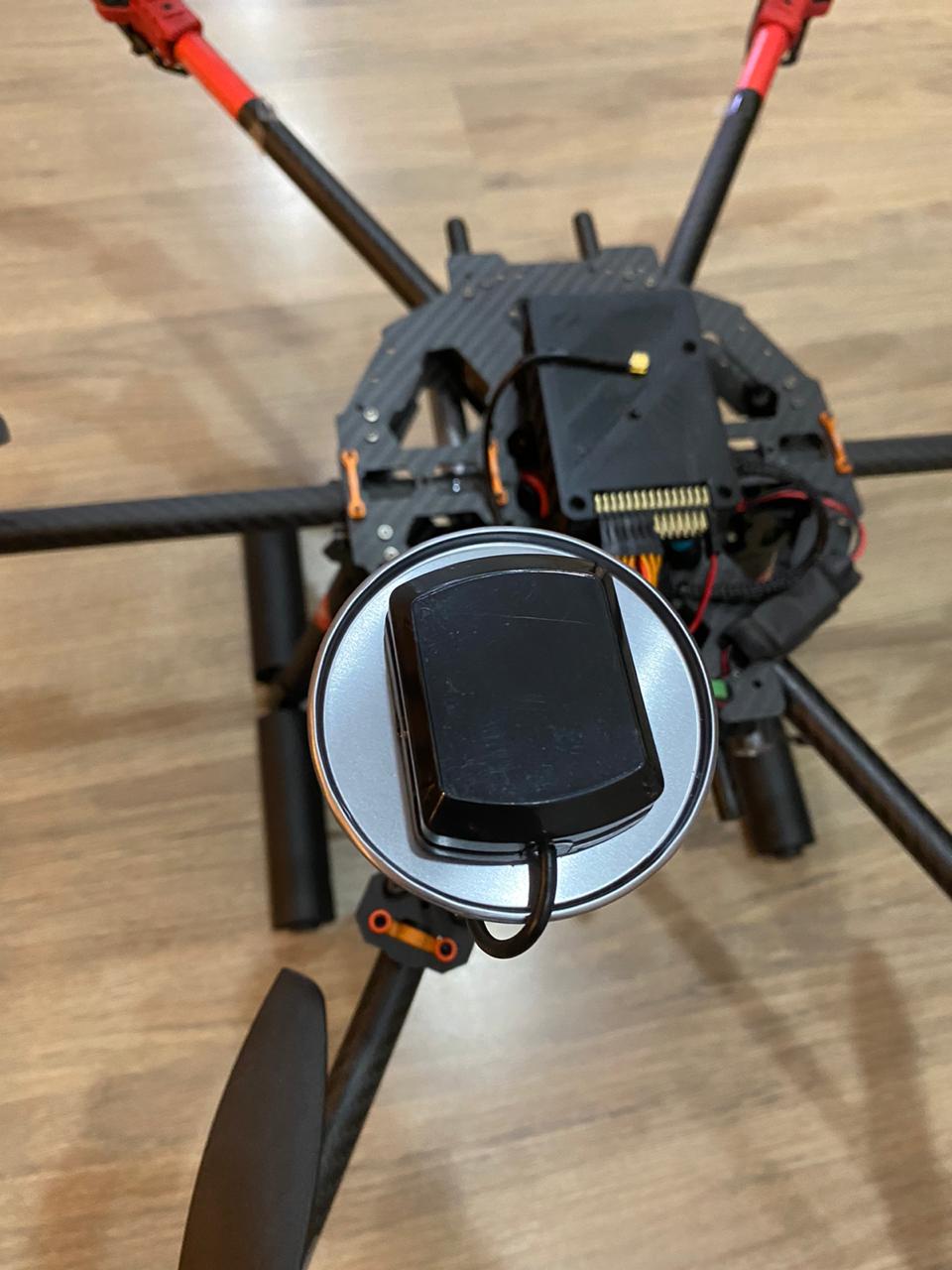 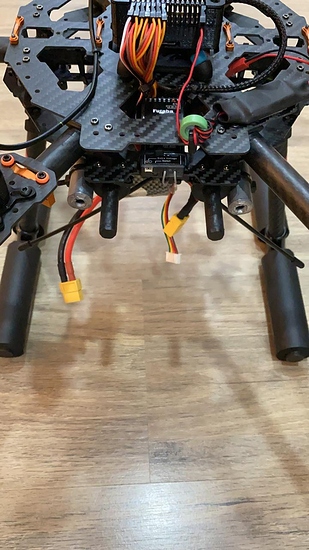 In Stabilize mode, even with no tune yet, I’ve had good controls over Pitch, Roll and Yaw. But I still fighting with the copter on throttle. It`s hard to keeps it hovering. One single throttle stick ratchet level up, the bird starts to climb up… One step back in stick, the bird starts to goes down. It was not so agressive as with 13"props, but still hard, specially to land smothly.
When the FC is doing the job, in AltHold mode, it was easier to hover, with a certain good control.

The GPS glitch still happening, less frequently, but it still there. I had also mag field check pre-arm error. Also less frequently, but happened too.
I had a battery fasilsafe and Land mode was started, but with GPS glitch and EKF errors, so it was not a good landing (with a little crash and flip at end). Broke 3 nylon props. I missed the strongs carbon fiber props.

Hi,
just noticed you’ve mentioned a PDB under the FC in your first post.
I personally stay well away from those as the current flowing through it and the flat, somewhat large size works rather well as an antenna producing RF noise. I’ve got my main battery power soldered together (all the ESC’s) and moved to one side in order to reduce RF noise.
In your case I would recommend to try at least to use also some metal plate like under your GPS antenna but place this one under the FC.
Also in industrial applications often any shielding is usually grounded. So first step is to simply try some bit of metal underneath FC and see how that goes. If problems persist I would solder a thin wire to that metal and connect to the negative of your battery or PDF.

A small report after the latest flight. Configuration is an Y6 with 4S-5Amp battery and 13" propellers. I downloaded the latest Emlid Navio2 image and updated Arducopter to the latest stable (4.0.4)
As you can see on the picture, setup is not the cleaner but it fly. 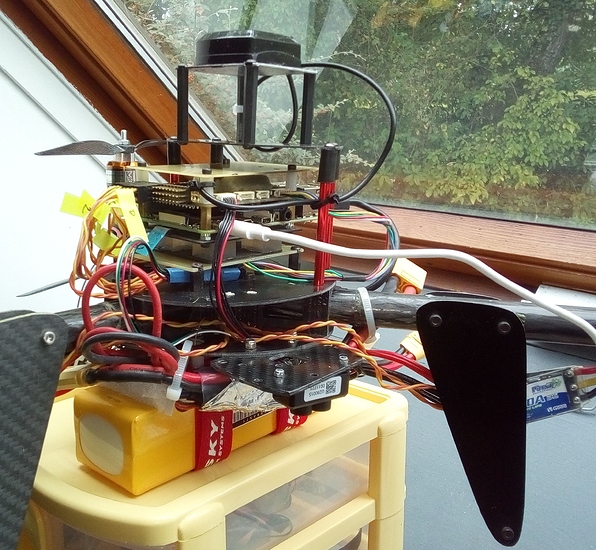 There is no PDB, Navio is powered by a Mauch power module (wrapped in adhesive aluminium foil).

A TFmini is plugged in Navio UART, a telemetry SIK 433 unit is connected via USB. 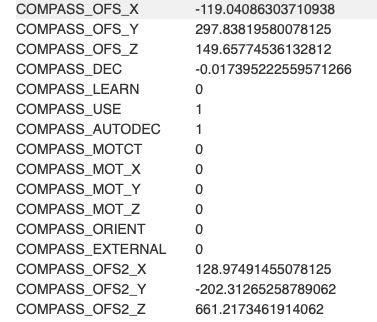 GPS is configured with GPS, Glonass and SBAS. 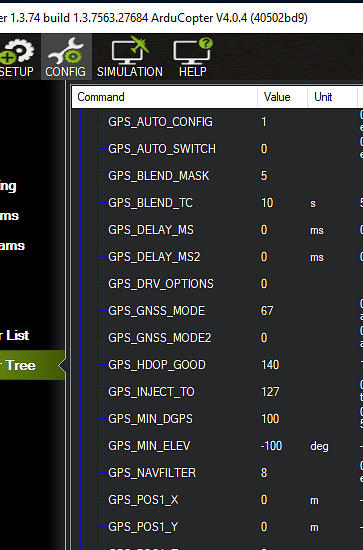 During this flight it my garden (with trees all around), number of sats is between 11 and 15.

No GPS glitches (some with 4.03 when doing the initial configuration) 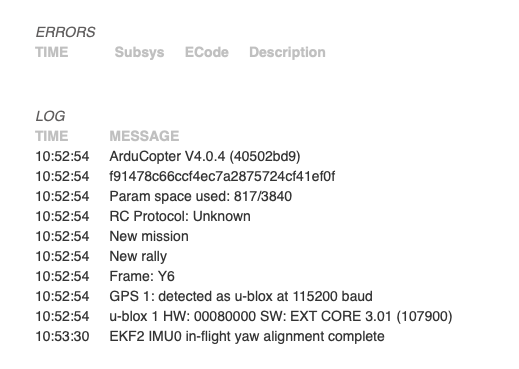 Yeah, that’s the funny thing with FC’s and RF interference: It’s the one scenario where being tidy and neat is not rewarded. I.e. you can have your ESC control cables running tidy but in doing so it is likely they emit some minor RF radiation. Solution: Run them crossing each other or better still twisted around each other and most of the RF signal will be cancelled out with each other. Same with PDB - seems a good idea at first but it comes at a price: Some RF interference. - At least would twist power supply wires for ESC around each other to cancel some of the magnetic field being created out.
…or better still don’t use a PDB.
Also, thanks Marc. was hoping some GPS related issues may be resolved in latest Arducopter as I’ve seen changelog and related changes made. Now at least I can decide if I’ll upgrade or not bother as I’m working on a VTOL drone and will be using controller on that instead.

…
I personally stay well away from those as the current flowing through it and the flat, somewhat large size works rather well as an antenna producing RF noise. I’ve got my main battery power soldered together (all the ESC’s) and moved to one side in order to reduce RF noise.

I got curious about that, can you post some pics?

In this way, what do you think about main plate which act as PDB, like in Tarot 680 pro below? 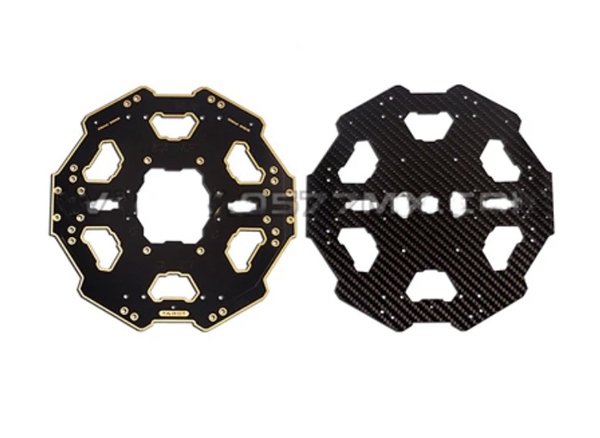 OK. Here is a photo of how I connect all the ESC’s to the XT90 plug whilst keeping it just to one side of drone. (Please excuse dirt, but I am actually using it here and there) 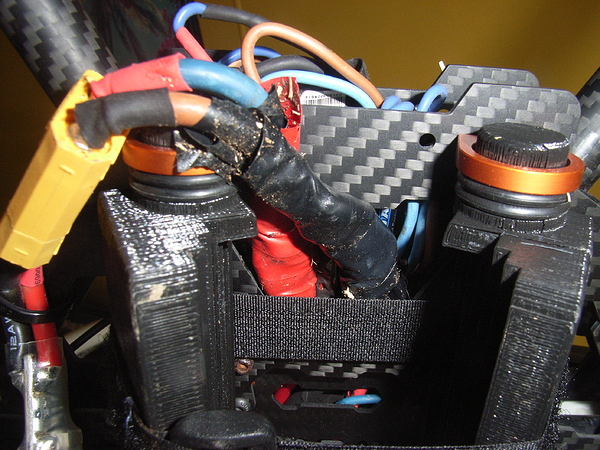 Regarding PDB: I think manufacturers often supply those as it is convenient and neat connecting everything that way. But not really giving it any thought as to the technical consequences. Also it brings the risk of hairline cracks forming after a hard landing which can spell disaster at a later stage. - As some out there have already discovered the hard way.
I personally would just use it as part of the frame, but connect everything in a different way.

To highlight further I’ve just setup a little test for everyone to see what I’m talking about. Not strictly scientific but it brings the point across:
Using an oscilloscope (essentially a device to make electricity visible) I’ve done a basic motor, ESC, RC receiver & BEC setup as we often find it in drones. For simplicity I am just using one motor.

Here is the power cable to the ESC in a neat arrangement: 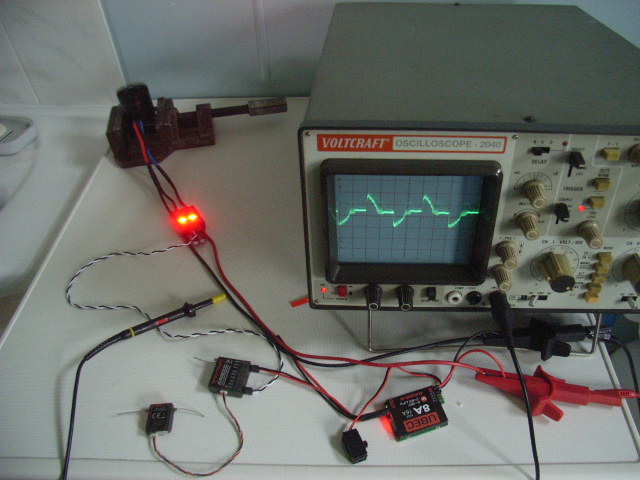 You can clearly see the RF signal (potential interference) created.

Now below is the RF signal created when the wires are twisted. 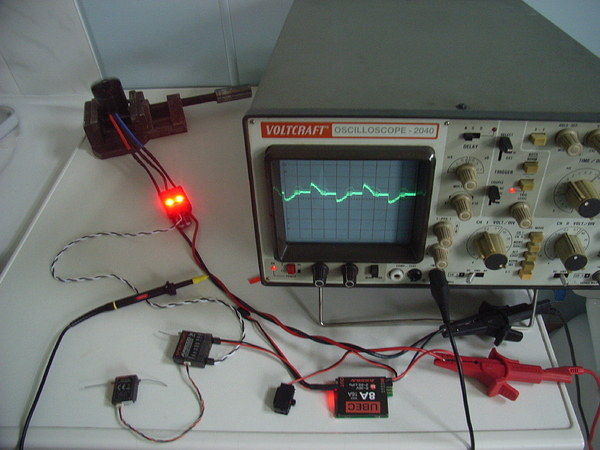 Yes, in both cases the RF signal is there but the amplitude (signal strength) has changed. - Clearly lower when wires are twisted.

Now here is the same for the actual motor wiring. …I don’t think have to explain anything more. 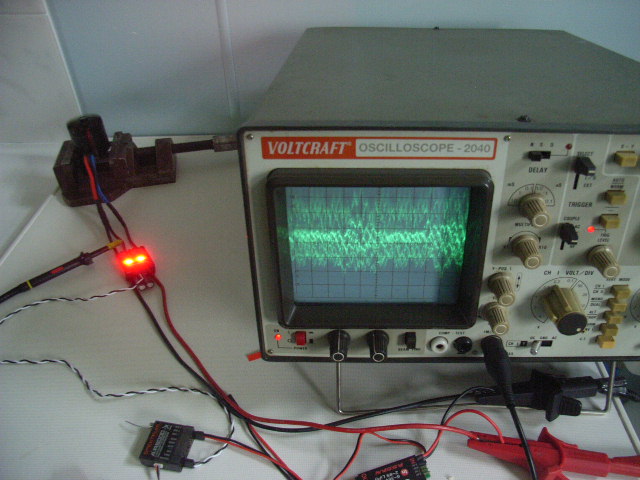 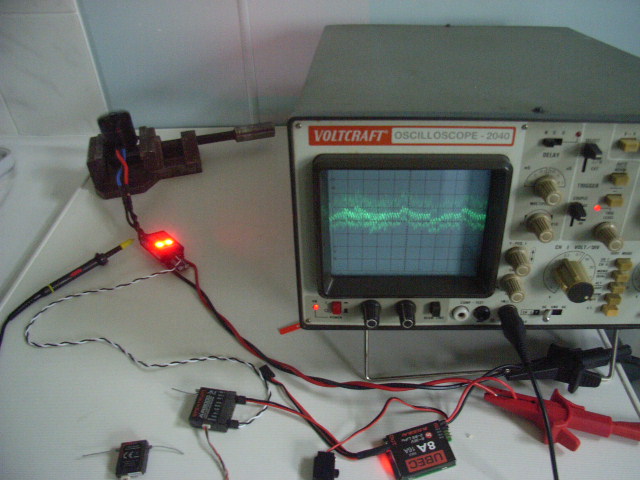 Wow!
It was in idle, medium or full throttle?

About 1/3 throttle speed. But note it was also without load which means very low current.
More current would equal more magnetic field strength.
So in other words it would even be worse under load conditions.

I’m wondering, wouldn’t separating the PDB/ESCs/cable runs from the rest of the electronics with an EMI absorber membrane completely eliminate or at least strongly mitigate the issue? It isn’t an incredibly heavy item to add to the drone.

Yes, good question.
I was also considering something like a mobile phone (cell phone) jamming bag which contains some special fiber which blocks RF signal. (I believe it’s in fact a very fine metal net).
But some testing with mobile phones indicated it did reduce reception substantially but not always fully block it. So from what I know similar may apply to the EMI absorber membrane.
Besides, the initial thought for me is to avoid it as much as possible in the first place. Not accidentally create it and then go adding more items, weight and usually money in order to try and fix something which may be able to be avoided in the first place.
So I guess in a nutshell try to avoid it as much as possible and practical but if problems are still encountered move onto additional fixes like using those extra items.

Hello all, just for finish this thread, I’d like to share the way I solved my issues.

I’ve had a lot of fight in my Hexa setup with Navio2+RPi3/4.

I did many tries to do first flight without pre-arm alerts or in-flight errors, like “check mag field”, “gps glitches”, “bad compass”.
My copter have a PDB under the FC board, and it can be the problem. Maybe all that errors came from noise generated in PDB.

I tried some above suggestions, like installing metal plate under navio, under GPS antenna, repositioning radio and telemetry antennas, etc. No success.

Before removing the PDB, I decided to test a new FC (Nora) and since first time I turned Nora On I havent any glitches or errors.
There are others changes from Nora scenario to Navio2, like GPS and Compass (external in Nora). Navio2 has everything on board.

Therefore, I couldnt tell that it was a Navio2 problem. Maybe Navio2 couldn’t deal with my scenario as good as Nora does.

I gonna use Navio2 in a plane I have and hope having better results in there.