Strange result in rtkplot with coordinates to waypoint

Point 6 should be south of point 5. And by the look of the north value of point 6, it show a lower value then 5…
Both numeric values in the pictures are correct but is displayed wrong.
The grid is correct
The visual distance is also correct but, point 6 as statet above is in fact south of point 5.

Edit: it is only the latitude direction of point 6 that is wrong.

Which hemisphere are you in? North or South?

Well you’ve got me scratching my head now too. Why don’t you add another point manually and see if it comes out in the wrong direction as well? 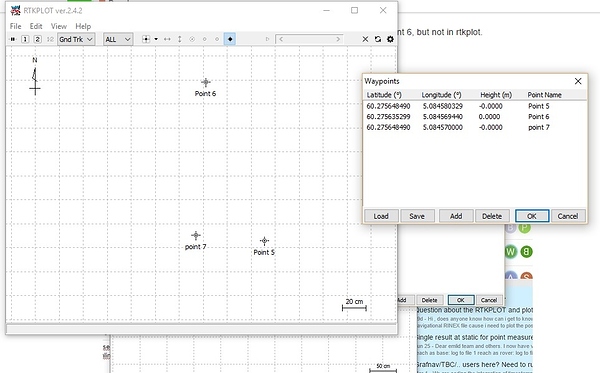 Well, I think you’ve got Gremlins™ then.

And I really hope rtkplot.exe doesn’t have a randomize_points_to_mess_with_user() function

Can you post the source file. Maybe there’s some weird characters in there?

Well…then theres another problem. Save doesnt seem to work in rtkplot. Can`t save waypoints.
Gonna try another rtklib first.

If you hover over the screen with your cursor, it should tell you the cursor coordinate location in the status bar at the bottom of the window.

No info there.
I didn`t run or load any data into rtkplot, just open empty rtkplot, open waypoints and manually enter coordinates.
That should work ok?

One more thing. I see i wrote importet coordinates in the heading, but this is not intirely true.
I manually entered in points under waypoints in the menu. Could this be it?
Does anybody get the same result if they do the same thing?

I only spend a minute trying, but with RTKLIB 2.4.2 patch 11, could enter the waypoints manually, but I couldn’t get anything to display on the grid. 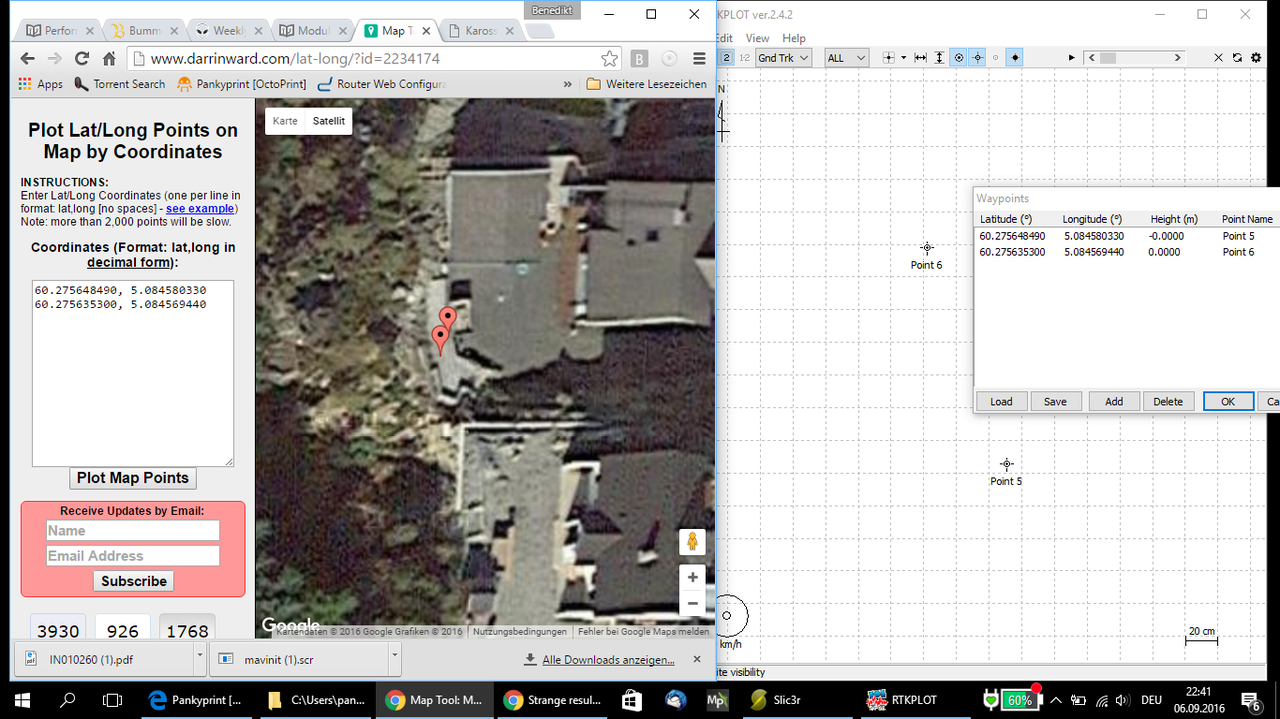 Can you save those waypoint as well?
And reopen it from a new empty rtkplot?

Sorry to revitalise an old thread, but the ‘latest’ version 2.4.3 b33 of RTKplot suffers the same issue

I can’t confirm that as I haven’t tested it yet, but I can confirm the Emlid branded version b33 of RTKplot has the issue whereas the same version from here of b33 doesn’t - both used independently of RTKpost, very strange.

Thanks for the report!

We’re looking into the issue. Let’s keep the discussion about the current RTKLib b33 version in this community forum thread so that all of the information is stored in one place.