I saw this mount but I don’t have a 3D printer. Researching 3D printing services nearby but… uneasy about this design as I don’t have any experience with multirotors. That’s why I like the clean-and-dirty setups.

Another thing I wanted to ask down the line when I’m close to finalizing the design of my project is what small parts (nuts and bolts and whatnot) should I get. I’m that inexperienced.

Got all the parts I mentioned above in my Shopping cart at HK and ready to go for it. Waiting mostly for the community to chime in with comments.

for 3d printing services look into 3dhub They help you find a local printing shop or one that will do it for you. All you have to do is up load the stl file to them. Check them out

Hey! Thanks for that 3dhubs. Will try to contact on of them to figure out the details.

That will throw off my whole design

At least I figured out the connections. Seems like I will need another 5V BEC to power the servo rail with the above mentioned PDB.

Too eager to get my hands onto something.

Was hoping to start for cheap and come up with an extendable design but the parts I outlined above come up to $400. Granted they’re not the cheapest parts but that makes me even more cautious.

@dgrat I like your mount in Two layer anti vibration mount

And we’re back to square one…

I went with Tarot 650 Ironman frame. Please comment on this power system:

I’m also getting Turnigy 5A (8-40v) SBEC. It is my understanding that, since the ESCs do not have the BECs and the PDB above seems to only have the 5V connector for the POWER port on the Navio2, I have to use one to power the radio. Please confirm. 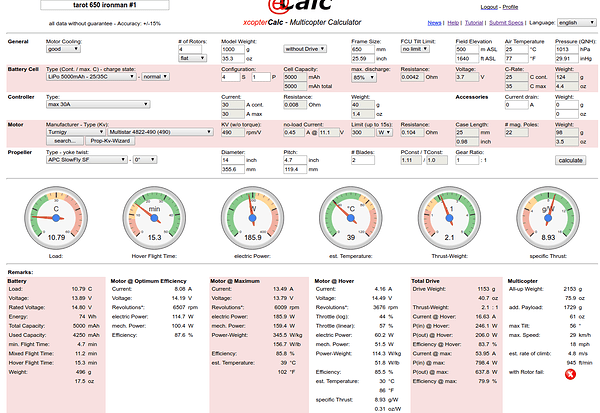 I’m ordering everything from one place for now.

Sure it may get over the power limit of the motor, but just under high load conditions.
However, the copter should hover at 30-60% load and full throttle conditions a rather rare.
If the copter is already with a 4S battery on the limit, you may buy a bigger motor.

Yeah… this motor is listed at 680 Max Surge Watts. So it should hold up.
Also recalculating for the 390Kv motor. Getting better flight time. And it’s cheaper. Tho it’s only 16 poles.

Want to order everything on the weekend so I can get to building on the next weekend.

Thanks for the advice. Please do not hesitate to give more of it 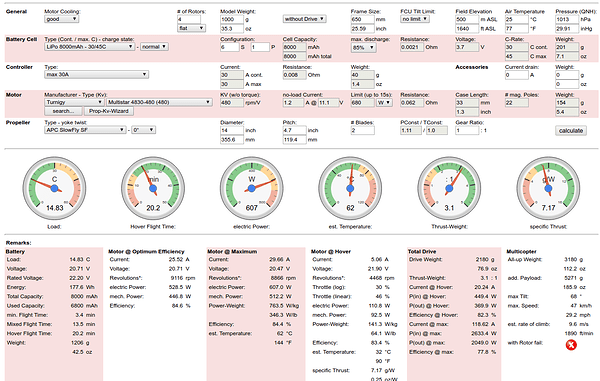 I think this could work

Ordered this configuration. Hope it works!

Thanks for your help.

They’re out of the 35C 8000mAh batteries… Would 10C/20C 10000mAh batteries work for this project you think? Motors draw 22A/31A. This should leave about 12A for other electronics for “normal” operation and have about 76A left at max. eCalc seems to OK it. Am I correct?

I think the 10C lipo will make it as well.

Another dumb question… Looking at the videos for mounting motors on this frame I see a guy unsoldering the motor wires from the ESC. I like the idea but… is this only for some special ECSs without heatshrink or did he just remove the heatshrink from the ESC?

Yup 3d hubs is awesome! I also recommend an old school way of just picking up the phone and calling a few of your top local universities or colleges. Most of them have a 3d printer now and if it’s a personal project, they can even assign an engineering student to help you out. I think they get extra credits (At least it’s one of the options for them. Depends on the School though . . .). Some places even carry like a decent Ultimaker 2 or if you are really lucky, a Form 2 printer.