I received the new Emlid Reach RS2+ GNSS Receiver. I was able set up the unit to connect via WiFi (direct and via hotspot). The main problem I am having is getting the LTE Model working on the AT&T cellular network. I spent a couple of hours in our local AT&T Store and on the phone with AT&T. We replaced the Nano SIM card twice. According to AT&T Tech Support, the LTE Modem IMEI # (350588280113887) is not compatible with the AT&T network. The whole reason I waited to purchase the RS2+ was to connect to the internet via the AT&T cellular network.

This is a short update to this thread. We’re communicating with Mike via email also.

According to the FSR, the unit itself and the LTE modem in particular are working fine. Mike has decided to test some different SIM cards with his unit as we have a suspicion that the current one works only with an AT&T 5G network.

I’ll post an update here once I have any news.

Any update? Trying to work with a agriculture based reseller and not having luck with ATT network as well.

Data Activation Center (DAC) mailed me 2 SIM cards, AT&T and Verizon. They setup temporary accounts for testing. I was unsuccessful with the AT&T, APN: dac.com.attz and VERIZON, APN: vzwinternet. I was not able to toggle on Mobile data in the ReachView 3 App. I was partially successful using the VERIZON, APN: so01.vzwstatic combination. The VERIZON, APN: so01.vzwstatic, would allow me to toggle on Mobile data but would constantly turn itself on and off. DAC personnel said they saw this ON/OFF behavior on their end as well. I provided Emlid a Full System Report. They are still reviewing all of the information I have provided. No further updates as of yet.

My Opinion: Based on my limited testing, it appears the new RS2+ Global LTE Modem may not be working properly with AT&T and partially with Verizon. Based on my experience with AT&T (the company), I am hoping Emlid can find a solution that works with DAC. DAC says they are willing to continue to help if needed.

If anyone else has a similar or different experience with the new RS2+ Global LTE Modem, please post.

It worked! I went into our local AT&T Store. They created a separate pre-paid AT&T account. It activated fine. I used “Broadband” as the APN. I was able to toggle Mobile data ON. I restarted the RS2+ and reconnected to the device via WiFi on my iPad. I have included 2 screen captures below. The minimum AT&T pre-paid plan is $35 plus tax per month for 15 GB. I am hoping Emlid is able to get DAC options working as well. 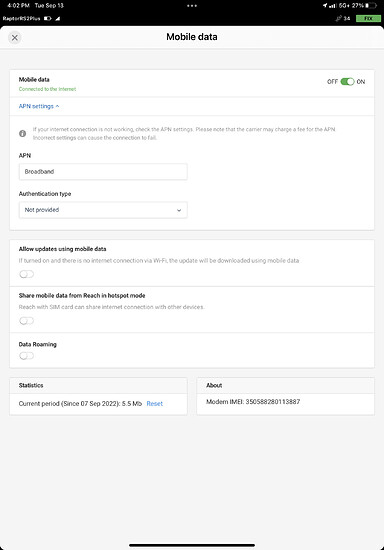 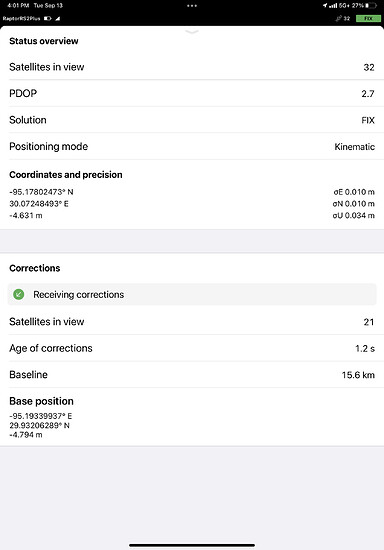