Using my RS2 at about 4000m elevation I set it up as a base for logging mode, I discovered that in early morning when overnight temperatures had been around -7degC the orange light flashed as if there was no battery charge. I had fully charged the unit the previous evening. The workaround for me was to connect a powerbank, and that brought the RS2 back to life so that I could start logging for a PPK operation. The Spec sheet indicates -20C for the lowest margin of operating temperatures. Yet the temp was not even nearly that low. Is this a fluke? Thanks.

It’s interesting. Are you sure RS2 was fully charged before work? Perhaps, charging indication was incorrect. What software version is on the device?

This happens with LiPo batteries. You see it everywhere in mobile electronics especially if they are under a loaded. When I get close to freezing temperatures I lose about 20% run time on the drone. In LiFePO4 batteries the lower the temperature the higher the resistance is in the battery, and the higher the resistance the lowers the available capacity is in the battery. Maybe look for some type of thin insulating cover. Neoprene or silicone don’t seem to affect signal.

I used mys RS2s yesterday around 1 celcius and around the end of the day it showed only 2 lights of battery ,so i took the units inside and this morning i plugged them in there was only one light missing . So maybe the cold effects them a bit . Thats my report on this. v2.21.2

Cold temperatures will always affect batteries and electronics. Because… Physics…

Usually when a vendor states that a unit can be used in this and this temperature, it doesn’t mean that unit will necessarily work like at room temperature, but that it will operate without errors.

It’s interesting. Are you sure RS2 was fully charged before work? Perhaps, charging indication was incorrect. What software version is on the device?

I obtained this one from one of your dealers in US in mid-September 2019 and took it with me to Nepal where I was using it in this remote location. I have left it there to use again next year, so I cannot give you the version, except that the dealer updated it to the latest version before sending it to me (it was an open-box deal), and I knew I had the latest version when I left for the field on Oct 17.

On first morning I checked in my tent and found that the orange light was blinking, and found the documents indicating this is low battery indicator. So I immediately plugged in my power bank. I then left the powerbank connected to the RS2 for the full day. The previous afternoon, while daytime temp was still around +7degC I had charged up the unit fully and then put it into the case for overnight. After using the RS2 for about 8 hrs on Day 1, I charged up the unit again.

On second morning I had the same orange light, so I then made plans to simply connect up my powerbank so that the RS2 would have power for the day. This was the procedure for each day. What I did not do was to see how long or whether the RS2 would function with the orange light flashing.

Thanks for giving consideration to this issue.

Yep, colder temperatures means denser everything and more resistance. Any kind of insulation would help.

That brass mount underneath the RS2 is great conductor, transporting heat away when its hot but also introduce cold if its attached to ditto 5/8 mount of metal.
If you break the connection ( using a non conductive adapter) between the mounting hole and the tripodmount you are using, you`ll see the temp doesnt drop as much thus the reciver last longer in cold weather.

Indeed, but the RS2 is already pretty nicely packed compared to other manufacturers.

Also agree with what @TB_RTK points out above. Maybe a nice 3D printed adapter could do here with M3 screw in middle for stabilization

I don’t disagree with the “non conductive adapter” concept; however this does not address the problem that I have experienced whereas the fully charged unit at around -7 C showed the low-charge light until it either warmed up or was charged by some external device. This was experienced immediately after the RS2 was pulled out of the case where it had been located overnight.

And for what it is worth, the powerbank used was the lithium cell-based Anker Model A1375, 26,800 mAh. I did not experience any difficulty with this powerbank providing the required load at this same low temperature.

i just dumped mine into the fridge (-18) for few hours and then see what happens when i boot .
To be continued

After 6 hours in the fridge at -18C, i gave it few minutes (preproduction models has a “special” power button).
I booted normaly but the battery indicator flashed orange and status bar showed me 1%.
Temperatur on circuit board was 11.6C. 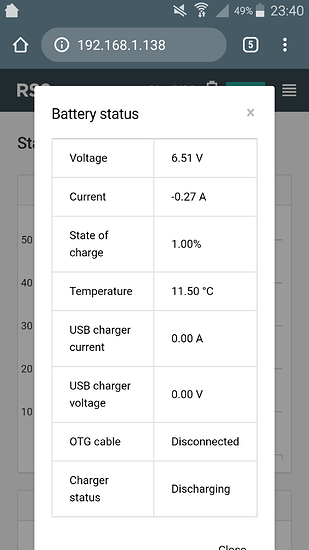 I let it run for an hour or so with the same 1% SOC.But I look at voltage instead. It tells me more about the battery then the SOC% 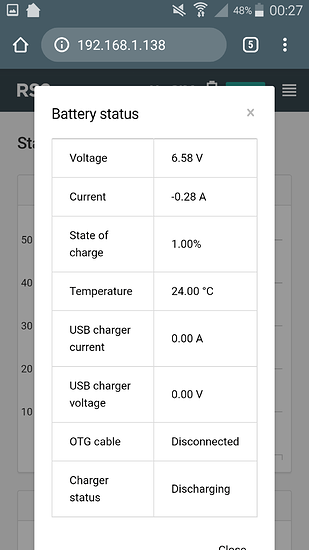 Screenshot_2019-11-24-00-28-00.png1080×1920 123 KB
Pay attention to the SOC voltage, its now 6,58v SOC% is still 1% and tempt 24c.
Temperature is rising slowly but the core temp of the battery is still low.
I guess based on previous usage that i could run this unit for hours but the SOC% may cause some software hickups. Not sure how much of the programming is base on this value but from my experience with solar systems and 12/24v off grid battery in low temp inviroment (sub -20C) , I should look at the battery core temp and voltage reading to get the most accurate true SOC reading.
SOC values is hard to determind right there and then.

I powered it down and let it rest for the night indoor and when i booted it up this morning it showed me 95% full capacity and worked just as if nothing had happend. 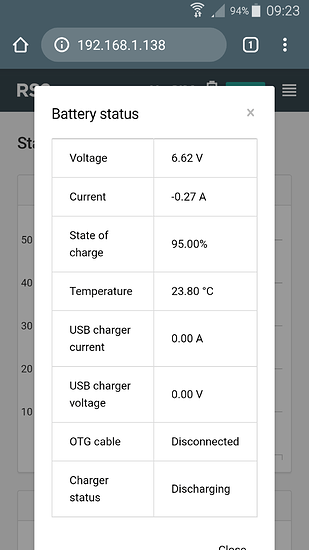 I am guessing you would gain few more hours with a non conductive brass mount and have the RS2 prevarmed before usage. This will give it a fair chance to perform as intended.
The RS2 has a really low power consuption (0,28amp) which is barely enough to let the LiPoFe battery run its self varm in just below normal conditions.
Also, comparing it to a batterybank is not fair. The unit will probably draw more and more power of the bank, way above the pweeny 0,28amp the RS2 would use from its own battery. The high amp draw is likely to varm up the core batterybank, letting it perform much better due to this.

That is my 2 cent worth of knowledge.

I guess based on previous usage that i could run this unit for hours but the SOC% may cause some software hickups.

This is exactly what happens with our Topcon receivers. They hit 10% and they auto-shutdown. While it’s different that the resistance experienced by say, a drone, it is resistance in the fact that it will not allow the battery to supply the correct voltage. It seems odd that the voltage in your test doesn’t seem to align with the calculation of the SOC%, does the software take teperature into account for that calculation? I wouldn’t think so, but what other variable could account for that.

Have you guys notice that the receiver will eventually warm up on it’s own and then maintain or are they not able to recoup in those temperatures?

@TB_RTK, your temperature went up, but was that inside or did you take it outside?

It seems odd that the voltage in your test doesn’t seem to align with the calculation of the SOC%, does the software take teperature into account for that calculation? I wouldn’t think so, but what other variable could account for that

I am pretty sure Emlid hasn`t put a probe inside the batterypack to measure the exact value…?
I am guessing the temperatur sensor is located on the motherboard or some other circuit board and this way its hard for software to tell whether the battery is empty or cold/hot, hence sometime getting wild SOC%. They could probably add some clever math or do some Emlid magic to it.
This is a preproduction model so i am not sure they have released a fix for it yet.

Have you guys notice that the receiver will eventually warm up on it’s own and then maintain or are they not able to recoup in those temperatures?

It will warm up but that brass mount is super effective.

@TB_RTK, your temperature went up, but was that inside or did you take it outside?

After 6 hours in the fridge at -18C, i gave it few minutes (preproduction models has a “special” power button).
I booted normaly but the battery indicator flashed orange and status bar showed me 1%.

So this behavior is expected on the preproduction units. They still have a different battery estimation algorithm (long story).
On the production models low temperature estimation is much better and in most cases works as expected, but we are seeing some scenarios where it shows battery as discharged even though there is definitely plenty of energy in the battery. We understand how inconvenient it is, and are looking into it.
These are only estimation issues, so actual performance is still very good. The industrial grade battery in RS2 will give plenty of working time even in cold conditions.

They hit 10% and they auto-shutdown.

RS2 shutdowns only when battery is below certain voltage, so even if estimation is off and shows incorrect percentage the device still keeps working.

I have recently updated my RS2 to firmware 2.20.8 and noticed that the battery seems to discharge very rapidly.

It was cool (1 degree) yesterday and I probably got 1.5 hours from the battery before i noticed that it was less than 50%, charged it for 15 minutes, then within an hour it was around 8%.

Interested in any tips on how to extend the battery life - all i was doing was logging and occasionally connecting to the wifi hotspot to log a point.

It was cool (1 degree) yesterday

Good point - I should have been more specific. Centigrade

May I ask you to send me the Full System report from the device in PM so I can make sure it’s the issue with displaying?

Hi Tatiana - just checking that you received the System Report?