Our research group is planning on conducting surveys of GCPs for drone mapping in the Arctic in winter 2021-2022. Due to travel restrictions this winter, we did not get to test our units in southern Canada in any ‘extreme’ winter conditions. They performed fine in the mild temperatures down to -10C. I did notice recently when leaving the RS2 unit powered down overnight outside (-1C), when I powered it up, the low battery indicator came on, however the unit continued to operate normally for the next 12 hours, despite still indicating that the battery was at 1% charge (Reach firmware v2.24.2). I thought this issue had been resolved:

Cold temperatures will always affect batteries and electronics. Because… Physics…

Usually when a vendor states that a unit can be used in this and this temperature, it doesn’t mean that unit will necessarily work like at room temperature, but that it will operate without errors.

We have purchased the RS2 2m cable w/o 2nd connector to hook up to a deep cycle 12V power source and are planning on deploying several RS2 units as base stations recording continuously for several weeks around our Arctic research sites. But it is unclear to me whether this external power source simply charges the LiFePO4 battery or whether this port by-passes the internal battery and powers the unit itself. If it it charges the LiFePO4 battery, then I have concerns on whether the battery will accept a charge at -20C?

I would like to get some feedback/advice/suggestions for running the RS2 units in temperatures close to the suggested operating limits (-20C) and for long periods of time. Or better yet, has anyone successfully operated this equipment in temperatures below these limits?

I live 53.5N in Canada. Batteries in general lead acid or lithium do not do well colder than -20C. The output drops off sharply.

Trying to charge lithium drill batteries outside is hit or miss when its -20 or colder. Sometimes the chargers refuse to charge the cells till you warm them up.

Laptops lithium batteries fully discharge in my work truck overnight.
Its takes one winter of cold exposure to cook a laptop battery. I have a laptop with a built in hard drive heater, lol,
i wish i was joking about this.

Lead acid batteries for remote Scada systems we put in insulated boxes suspended off the ground. The heat of the batteries and the regulation system charging during the day helps minimally to keep the temperature slightly moderated.

But we size the battery bank massively oversized for the load due to the lack of sun we get in winter.

For one flow transmitter and a cell modem about 1A load the common setup is a 250W panel, and a 125AH deep cycle battery, with a charge controller. These systems function even at -50C. But lead acid batteries only last about 4 years and they are toast.

Panels are mounted vertically on the antenna pole above roofline to maximize snow shedding, and rain cleaning. The panels do not need any maintenance mounted like this.

I think you are on the right track powering the RS2 off a large truck battery.

Electric cars are going to suck here half the year.

Two things I think is helpful:

Get a plastic 5/8” 1 cm stand-off. This will help isolate the brass threading from your pole, and reduce the cooling surface.
This cooling system works really nice in the summer, but sucks heat right out in the winter.
Here you can see it has heated the top of the pole overnight: 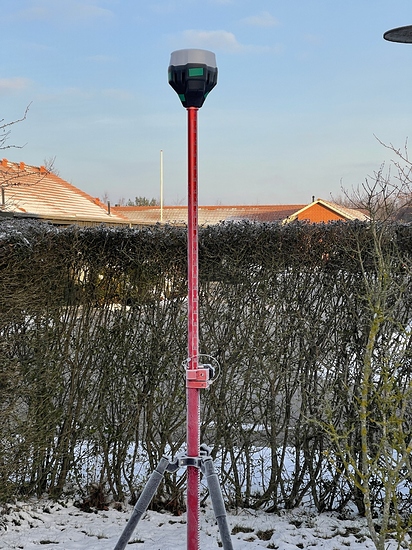 Use a big power pack stored inside a jacket or inside an insulated box/sleeve. Have the power pack connected the whole time. You could even have the RS2 slightly discharged, so it will heat up more when charging.

As a bonus third, create a pouch or sleeve for the RS2. Imagine a neoprene wrapping or something similar. I haven’t seen this anywhere, but could be very cool and useful!

It really never gets that cold here, but it does get cold enough to noticeably decrease the runtime. We also use a power station connected to the base, a knit cap and a Ziploc bag over that.

Our RS2s were used for snow studies in Cambridge Bay last winter by a team from our uni and they reported no issues.

Of course, I wasn’t there so I don’t have much to say in terms of specifics on charging, but the units came back from there and the batteries are still in top shape.

They didn’t leave them in the field for more than full days though, and charged them inside every night.

I like the idea of the plastic 5/8’’ thread adapter as an insulated barrier. I was also considering using a hard foam insulated box with a small hole for the RS2 extension pole to fit through. I could possibly include a couple 12HR hand-warmers inside, I could replace them twice a day. 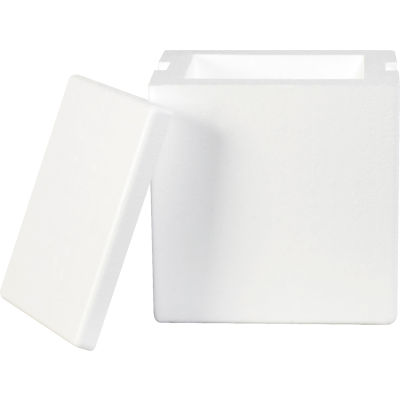 @wizprod - do you have a source for a plastic thread adapter?

If you have access to 3D printers, I could whip something up quickly in CAD.

@Gabriel_C - What time of year was your team in Cambridge Bay? Just curious about the temperatures they were dealing with. I’m pretty confident in keeping these units running for day trips outside, when we have a chance to charge and warm them inside at night. However, I’m less confident in running them longterm and re-charging them while outside in sub-zero temperatures. We are interested in leaving some units on the sea ice to monitor tide height fluctuations for the duration of the campaign. I do have access to a 3D printer and would greatly appreciate a CAD file of such a plastic 5/8’’ adapter!

An insulated box, potentially with a heat source inside and a plastic 5/8’’ thread adapter should help to moderate the RS2 temperatures and hopefully allow for periodic re-charging without taking it down and bringing it indoors to warm-up. Thanks for the advice so far!

I suppose you already know the declared Reach RS2 operating temperature range. I just want to confirm that we’ve tested the devices at temperatures up to -20ºC, and they work well.

However, as you’ve already noticed, there are some battery indication issues that mostly appear under low temperatures. It doesn’t affect the battery performance itself but results in the wrong LED indication and displaying charge status. Currently, we’re working on the recalibration of the percentage measurement system. In the meantime, I’d suggest relying on voltage level instead of percentage.

But it is unclear to me whether this external power source simply charges the LiFePO4 battery or whether this port by-passes the internal battery and powers the unit itself.

If you provide a power supply via the bottom connector, it doesn’t charge the device but powers it directly.

What time of year was your team in Cambridge Bay?

If I recall it was somewhere in March, but I couldn’t give a more precise date. It was before travel to Nunavut was highly restricted.

If you have access to 3D printers, I could whip something up quickly in CAD.

I am also interested in your design. I also have access to a 3D printer. My application is a lake study at about 14000 ft where nighttime temps are around -5degC.

I’ll try to come up with a CAD file to share as soon as I can.

I spent some time yesterday on this, mostly I had to figure a workaround for my Fusion360 account lapsing out of their now defunct hobbyist account. It was the only CAD software I know that can easily generate standard threads semi-automatically. If anyone has an alternative (open source or free), I’m open to suggestions.

In any case, here’s the result. This is a 20mm offset, female to male 5/8-11 UNC. I haven’t printed it yet so I don’t know how tight the tolerances will be but I used the slackest standard. Your mileage might vary. 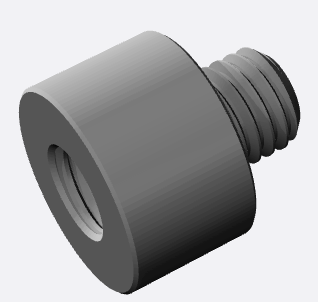 I got it printed and tried it out. It works relatively well but it screws easily on certain threads, harder on others. I think the print accuracy might have made the fit a bit tighter but I guess that also, not everyone is super strict following the standard when they cut their threads. Overall it can be printed as is and works if you break the threads in little by little on the tighter fits.

As seen in the pictures, there’s a small gap between the part and the carbon pole that’s caused by the rubber o-ring on the pole. Measure the total offset properly! 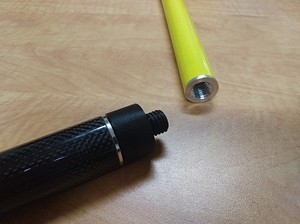 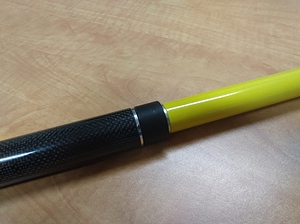 Thanks Gabriel - that adapter looks good. However, I was just thinking about a ‘What-if’ scenario while working in the extreme cold. Plastic obviously become more brittle, and I was concerned about what happens if the plastic male end breaks off inside the antenna! It would likely be a pain to remove! Would it be possible to make an insulated adapter that uses two female sides? The metal threads on top of the pole can screw into the adapter, and then a metal adapter with double-sided male ends could be used to attach the antenna to the insulated adapter. 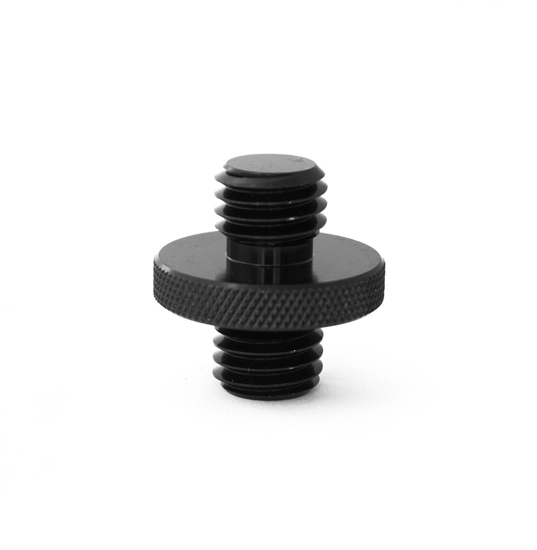 The total length of the double-sided female insulated adapter might have to be increased slightly to keep a decent layer of insulating plastic material between the two attachments. In the worst-case scenario here, the plastic threads in the female adapter might get brittle and strip/break. But the metal ends can always be pulled out/removed.

Completely valid point. I’ll make a female/female adapter and link it here. All those parts might be otherwise useful for other situations anyway.