The idea for this post came to me from seeing all the nice enclosures people are 3D-printing for their Emlid M2’s, using the drone helical antenna for keeping the size of the setup down.

I have seen numerous people claiming that the drone-antenna is just as good as a classic patch antenna for classic surveying on the ground. Looking at data-sheets and radiation plots it simply couldn’t be true.

So, what to do about that? Experiment of course!

For this experiment I have selected 2 antennas:

They were chosen as they both are around 200 USD. The GPS500 antenna has the further advantage of being NGS calibrated.

I set up the antenna on a well-known and well-defined point at my home. The point that has low to medium multipath potential, with a roof to the east blocking the view up to 20 degrees. I have not elevated the antenna very much, again to make it a little tougher on the antennas for test-purposes.
Here the helical antenna mounted, rubber-band-style! 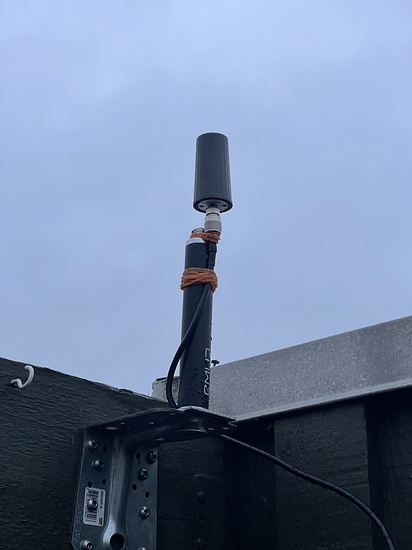 Let’s start with how the 2 antennas are different:

Tallysman HC871
This antennas is a helical design, which makes it quite compact. Doesn’t require a groundplane either (although it can benefit from one, but that will be a project for another day), which makes it super compact and lightweight, ideal for a drone.
On top of these advantages, it also allows for signals to enter from below 0 degrees, which is ideal on a drone that pitches and banks while in the air. Up high in the air, multipath issues are more or less non-existent anyway.
However, when used on the ground these advantages quickly becomes disadvantages. The disability to block signals from below becomes a problem. The lower gain of the antenna (~1.6 db) (partly from a missing groundplane) also becomes a problem, especially under less-than-ideal scenarios.
Datasheet: https://www.tallysman.com/app/uploads/2018/03/Tallysman®-HC871-Datasheet.pdf

Harxon/Swiftnav GPS500
So now to our second contender. The antenna is a patch design, a design used for GNSS since the very beginning. It consists of the antenna itself, on top of groundplane, usually 10-15 cm in diameter (but can be up to 40 cm on large choke ring geodetic antenna designs).
This antenna weighs in at almost 400 grams, making it 10 times as heavy as the helical.
However, the patch design makes it quite effective at stopping signals from below 0 degrees. It also feature much higher gain that the helical, at 5.5 db, further contributing to a better signal.
Many other parameters are also better, like the axial ratio (the ability to dampen signals with unwanted polarity).
Datasheet: https://www.swiftnav.com/resource-files/GNSS%20Antenna/v1.2/Specification/SwiftNav%20Mini%20Survey%20Antenna%20GPS500%20Specifications%20v1.2.pdf

So with that introduction, let us look at some hard data. For the 2 antennas I have collected raw-data for 5 consecutive days for each to make sure to have a good average.
Data was logged in UBX on the Emlid M2 and converted to Rinex 3.04 in RTKconv demo5_b34d using a 30 second interval, resulting in 14400 epochs each. Represented in RTKplot with a 15 deg mask (the grey area in the plots below).

SkyPlot-L1-All2578×922 717 KB
Almost identical! So if you where using the M+ you would notice little difference. The signal-to-noise ratio seems to drop off a little faster as we go from 90 deg to 0, as indicated by less green, going towards yellow.

Let’s focus on the L1 band but GPS only and another view:

Let’s try the alternative view from before to see more detail, but for L2 GPS, left HC871, right GPS500.

SNRMP-L2-G2588×960 467 KB
Around 5 dbhz of difference to the advantage of the GPS500 antenna, and significantly more multipath.

Conclusion:
As with so many other tasks, it is all about choosing the right tool for the right job. Here it is clear to see that for ground-tasks, there are better alternatives to the helical. However, for drone RTK/PPK, the patch antenna design simply isn’t feasible due to size and weight.

I have to say that while I already had the natural intuition from general knowledge that the helical antenna wasn’t going to perform as well, these results are surprising. I did not expect the performance to be that low in comparison.

I wonder how the two antennas would compare when mounted on a hovering drone considering the electromagnetic interference coming from the ton of electronics surrounding it.

Thank you for putting the actual science behind my constant suggestion. Great write up.

There are pros and cons to helical and patch antennas.

From the files I have seen here on the forum, the helical performs well on the drone! The critical part is shielding the M2. When that is done, it’s the performance per gram is hard to beat

The difference is huge, would you reckon it to be the same amount if they were used at the same time? I am asking for a friend that has a friend

Yep! I have made other logs in rain and full sunshine, same pattern.

Any suggestions on how have you acheived sheilding the M2. Especially with respect to the materials used and the way the material is used to providing sheilding.

Great analysis Christian ! From my first days using the M2/helical antenna, I saw that there were vertical accuracy problems with the helical. I think the best vertical accuracy I saw was approximately 4-5 cm with pp using short baselines (<2km). Even with long occupation times of 2 hours and PP against local CORS approx 40km away, the best vertical usually checked within 5 cm. Horizontal accuracy was usually less than 3-5 cm. The GPS500 is a good antenna, no problems with accuracy.

Just to make sure people do not think helical antennas are outright bad.

Helical antennas are awesome and right tool for rovers in challenging conditions; heavy dust, semi obscured, extreme angles, holes, hills, and foliage. But at the cost of very little overall accuracy. Their light weight is ideal for flying drone platforms, and small size increases ease of installation in many other applications. 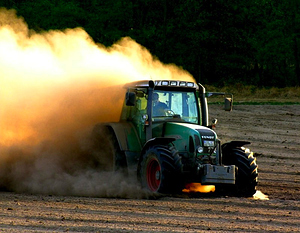 image800×622 183 KB
If this guy was using a helical he would not have to get out to clean off the antenna periodically to restore DOP. Right now he can see but when he turns around with the wind, only the gps can guide him straight. Without Gps this makes for a very long slow crooked day.
4 Likes
EBE111057 (Bryan Enfinger) November 27, 2021, 8:41pm #11

Nope, I’m not knocking down the helical, however for low accuracy positioning (static or RTK) for creeks, roads etc. they are just fine for typical low order accuracy boundary land surveying.

I ordered this one.
It is a bit confusing about Harxon GPS500, some specs show it supports only GPS+GLO+BEI and others GPS+GLO+BEI+GAL. Maybe it is an updated model.
I hope to work well with M2 as base station.

Technically, as with the HC871 helix, the GAL E5B is not supported, as it is in the borderland between the supported lower frequency, and the blocking of lower frequencies.
However, it is so close to the supported range, that it still receives a perfectly usable signal.
If you want the full potential of that frequency, look into the GPS1000 instead. 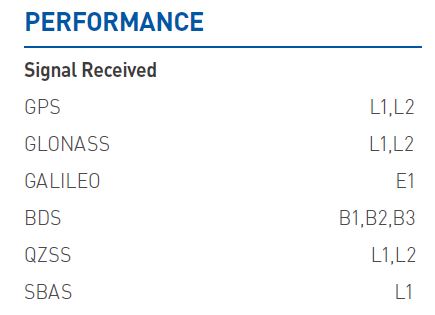 and most aliexpress descriptions for the GPS500 says

Anyway I will report back when I get it in my hands and test it.

and most aliexpress descriptions for the GPS500 says

Do your own homework!

The people writing these descriptions have no idea about the fine nuances and their effect.

I love Ali express but I am a hobbyist, buying at hobbyist prices, expecting hobbyist results. Though more often than not the goods are just as good, just no marketing, sales, service, r&d, reporting or warranty overhead. You get what you get and you don’t get upset.

Ah ha, no wonder I get better results with my RS2 base compared to the M2

While waiting for the GPS500 can anyone tell me what type of adapter do i need to convert the standard sma cable to TNC?

Actually, if you want an even more direct connection, I’d probably go for an MCX to TNC. Then you hook directly to the M2. But it could prove very hard to find.
Go for the thickest cable you can find (while still being 50 ohm impedance), to lower your loss.