A new version of ReachView is out for both Reach and Reach RS! This one goes by the name of v2.3.0 and introduces a highly requested feature - point collection.

At this moment, collection is only allowed in geodetic coordinates with WGS84 ellipsoid, also known as EPSG 4326. Working in other CRS requires a little more polish and will be introduced in one of the next updates.

For all this we have added a new tab to the app - Survey. A couple of screenshots to get you excited: 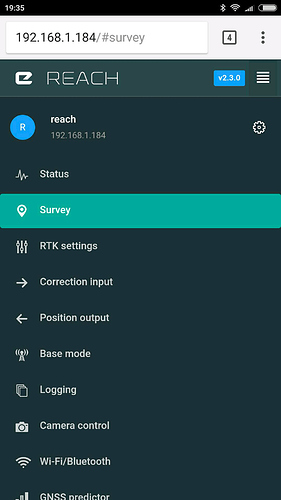 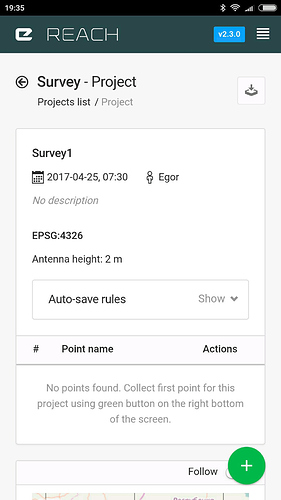 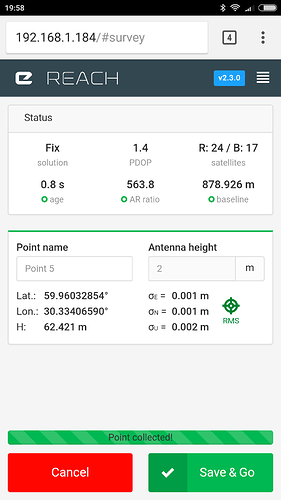 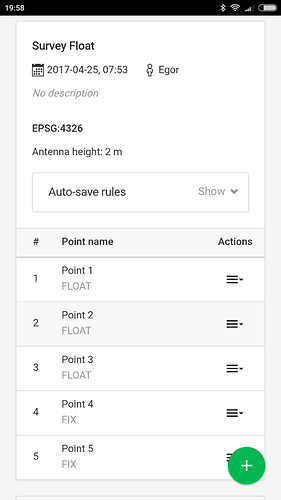 This is a big release for both Reach and Reach RS, and we want to push their functionality even further.
We know many have been waiting for these features, so we can’t wait for your feedback.

Also, a huge thank you to @bide, @TB_RTK and @Brent_W for helping us with testing and giving valuable advice.

We’ve pushed v2.3.1 which should fix the cache problems introduced with v2.3.0 - mainly the blank contents of the survey tab immediately after the update.

Congratulations on your work, I just installed v2.3.0 but in the window of survey me appears blank, Any suggestions?
I would also like to know if you can supply us with the STL file to print the housing of the original reach as the reach RS.
Thank you

I would just like to take a moment to publicly thank the Emlid team for bringing us the point collection feature into ReachView. So thank you! And I know I am speaking for more than myself when I say that!

I’ve spent 8 hours working with it so far and it keeps you more informed, confident, and in control of point collection, and most importantly: it tells you without delay when to pick up the rover and go to your next point!

@ricardore69 Maybe you need to clear your browser chache?

Nice feature ! Will speed up my workflow … Have to test it.
+1 with ricardore69 for STL file as mentionned 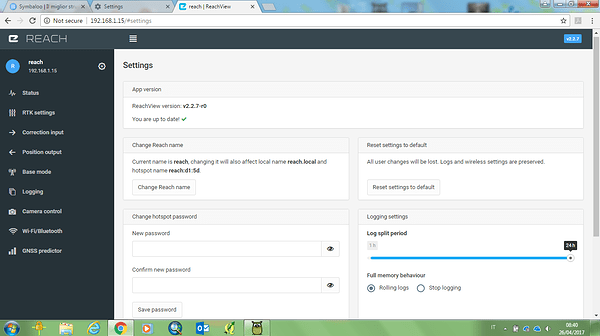 The solution is to unplug and pulg the device to power

In this video, we saw that @TB_RTK is collecting data for 40s.

Could you explain why choosing 40 seconds and the method use for calculating collected point : averaging, median or least square ?
I mostly use 3 min in my survey to collect GCP to be sure.

It was default value when activating autosave function. It could easily be changed up or down in minutes or seconds.
It depends how you want to survey and save points.
For me, to verify the coordinate. I would set it to 1 sec, and do a second survey about 30min later just to be sure. But it depends on how many, how far apart and what level of accuracy is needed.
In our rutine, a static 3min survey over point could easliy be as wrong as one second survey. Our rutine tells us to either to do a 3 x survey over a point with 15min between or 2 x survey with 45min between to be reasonable sure of its position.
Hope this helps

Edit: The mathematics behind averaging in Reachview could probably somebody else answere

ok thank you for answer. I will repeat separated point collection to test with less time each time. I understand the fact to changing time between observation, good point !
With 3 min, I’m in a range of 15mm which is pretty good

When will the binary ERB protocol get extended to include “AR ratio”, “differential age” and “baseline distance” information ?

It appears extending the app made some of our cache problems resurface. Currently working on a fix for this. Meanwhile, this helps.

Thanks for the kind words

Reach checks for updates automatically every boot, but only once. You should either reboot it with a wi-fi network available or go to 192.168.1.15/updater to check for updates manually.

The coordinates are being averaged. I think the approach @TB_RTK mentioned seems more than reasonable.

Many thanks to the emlid team for the continuous software improvements: you are really doing a fantastic job!

May I add to the wishlist the possibility to load basemaps or shapefiles on reachview? It would became the definitive survey tool!

Point stakeout with external data import is in the works, together with CRS support.

Everyone who had problems with cache and a blank survey tab should update to v2.3.1. This new version will tame the cache beast.

Just a tip if you having trouble getting the update notification. Try clearing cache (or run incongnito mode) and then turn off and on again the Reach.

This is a great feature thanks for the hard work. Is there any way to download not only the average point but also all of the points collected (ie the log) without manually starting and stopping the log each time?

Or what is the suggested workflow for collecting points without live RTK communication, but post processing (PPK)?