Merry Christmas and Happy New Year! We have just one small new feature we want to push before we go on a small break - phase measurement based heading.

We’re always happy to hear some feedback, so don’t hesitate to share if you have some!

Great to see another update. Wish to see UTM support, basic calculation for lines and polygons.

Delta-phase positioning smoothing for better single positioning and heading. This comes in handy during stakeout, as we now provide precise heading even in single mode.

This means that you no longer have to be pointing the cell phone north at all times ?.

And now the available WIFI access points are listed. Wooo hooo!!! Thank you!

Disregard. That was on the M+ on existing firmware :0 Sorry. Sure wish you would fix the Reach RS so it would do the same.

I am testing version 2.17.0 and in the stakeout I do not see the deltas. the ideal is to see two values ​​of direction either N-S and E-O is very difficult stakeout with only one direction and with the graphical arrow 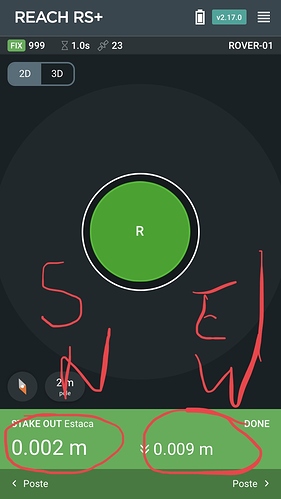 solved in this version returns to fixed after losing signal without problems. I did not have to connect and disconnect input correction

So I would have to indicate for the stakeout

Tim would be another way that is not bad !!! Survce unique position with respect to a cardinal direction plus the staking distance

Dev series (Odd numbers) is a continue from the last stabel version (stable is even numbers).
So yes, DEV 2.17 should contain everything from the stabel 2.16.2. Except from the bugs i guess, BUT could have new ones as the DEV might introduce newer features for testing

so you would have to see the stakeout in rechview

It’s pretty typical in most survey gear i have used to report in terms of northing and easting (Y,X). Negative values reflect the opposite directions. More relative to the coordinates and much cleaner interface that way.

There is a simpler way of doing this:

Have a graphic on the screen, with an arrow that points in the direction of the sun (and/or moon) and an arrow that shows the direction that you need to go. Similar to an Automatic Direction Finder in an aircraft, with the beacon being the sun (or moon, or both) and an arrow (or bug) of where you need to go. And then you don’t need to worry about keeping the orientation of the Emlid or phone and know roughly where the sun is.

Just a thought on making it easier to use.

the cloudy days do not see the sun and the moon !!! what should I do ?

I don’t understand Anything !!! Sorry

@egor.fedorov, could you give a link or (brief) explanation on the theory behind “Delta-phase positioning smoothing”? Is this the same as what is sometimes called Carrier Smoothed-Code?

Ah ok, i found it https://www.novatel.com/assets/Documents/Papers/new_pos_filter.pdf

18 posts were split to a new topic: Why does not Galileo constellation Galileo show FieldGenius?