I completed a PPK survey the other week with a single RS2 rover. Base station data was pulled from a nearby NRCan station (7km away). I completed the PPK using RTKPost (demo5 b31). In the field we were surveying in support of a seismic survey, so collecting points in ReachView Survey (latest version), using about 20 - 30 seconds time on each point (single, no RTK) and exported everything to CSV. Logged Rinex3.03 directly in the RS2 for PPK. Now when trying to use the CSV of survey points from ReachView to parse out the correct location from the PPK result I’m seeing a mis-alignment.

For parsing I’m using the UTC time, by converting to total seconds in the day, to align the proper station label (from CSV) to the correct geographic location from the PPK results. However I’m noticing a 1 - 3 minute time difference in the time reported in ReachView Survey and the time reported in the PPK log. I made sure that I didn’t accidentally post process using GPST. See attached:

Has anyone encountered this problem before? This seems like a very large time mis-alignment.

May I ask you to share raw data logs so we can look into them?

Not sure I understand your issue correctly. May I ask you to explain how you come to the conclusion that these two points on your screenshots should be the same point? Were you physically at that point at that time period?

Do you observe the same time shift for all points? This mis-alignment is indeed rather big and looks like something is not taken into consideration during conversion or post-processing.

This data set was in support of a seismic survey for georeferencing the seismic results. Each station represents the location of a geophone sensor, so the order and spacing of the stations is well defined and known. The time from Survey CSV is consistently behind UTC time from PPK result, however the time shift magnitude doesn’t appear to be consistent for the entire day.

Maybe I need to elaborate on my field data collection method:

Thanks for the detailed explanation!

However, may I ask you what you mean by “field observation window”? Why is it necessary to add those 5 seconds? Have you tried matching without adding them?

I’m adding 5 seconds to the Collection Start Time so that the X,Y,Z position being selected is within the point observation time frame. I want this time/position as it is the best chance of capturing a time/position where the receiver is stable.

I haven’t attempted to use either the Start or End time only.

I’ll try to reproduce your PPK workflow with your data. I’ll write back to you once there’s result

Sounds good Polina. One thing I should mention is the time shift is observable in the LLH data as well, so this isn’t a result of PPK. The pictures below are screen shots showing raw LLH data in purple and Survey CSV result in red star.

I’m afraid I can’t understand how you compare this data.

Both CVS and LLH data sheets in you case, as far as I understand, were obtained in a single mode. It means that the accuracy of these measurements is meter-level. Also, CVS file from the Survey tool is a list of averaged positions during the time period stated in the file, in which you collected the point.

It means that all of the coordinates of these points are going to be different. The way to correlate the points you’ve collected in single mode with the post-processed data is through the time of the start and the end of collecting a point.

In RTKPlot, to get the position of the post-processed points, you should do the following:

To see the averaged position, you can look up ORI coordinates on the “Gnd trk” tab. This is what you can use as the point coordinates.

May I ask you to follow these steps and check if there are any issues with importing them to the QGIS?

Perhaps I need to clarify that those images above show a tight cluster of points (purple) within a 1-1.5m radius. Below is another image of the data at a larger scale, again single solution LLH (purple) and averaged point from Survey CSV (red star). The surveyed stations were approximately 5m apart and you can see in this image the clusters of purple LLH points surrounding the resulting averaged survey point (red star). In the field the operator is walking the receiver to the geophone station, performing a 30s observation, then walking to the next geophone station 5m away. I’m comparing the time stamps from the LLH points that cluster around the survey point and noticing a time shift of several minutes. Have you been able to look at the data I submitted to Tatiana? 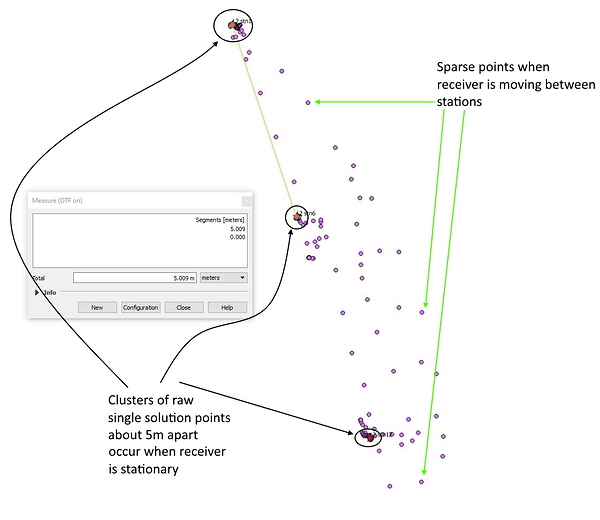 Can you make a manual protocol to compare it with the observation time span?

This would be a huge problem for my post processing script.

I actually also have a case where I had to move the observation time by 45 seconds to get a fix. I could see the same thing as you have seen.

Its actually a desaster because its a master thesis with several hundered measurements and now I understand why some of the points have a terrible ar ratio. Probably they are all misaligned.

Now I’m back in the time where the survey did not include starting and ending times. I started to write a script which uses the result of kinematic ppk to find the beginning and end of a survey point by the clustering of the points. I guess I have to continue with that approach.

Are you having having cycle slips in youre data?

Here is the RTKPlot window for a subset of my data. A few cycle slips but nothing major (I think). 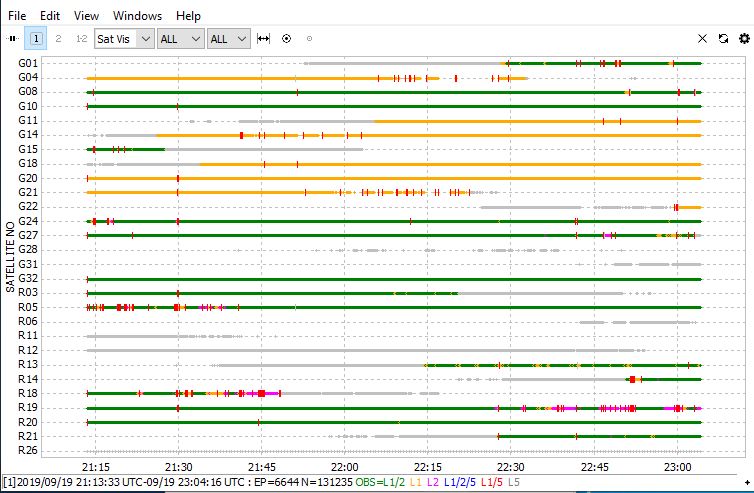 I’m not sure what you mean by this question:

Can you make a manual protocol to compare it with the observation time span?

Its just an idea to prove that the issue is existing. Write down the start and end time of each point on a paper during a new survey. Just to compare and to have a reference which is independent of the device itself.

Here is the RTKPlot window for a subset of my data. A few cycle slips but nothing major (I think).

Hi Chris,
yes, that looks good. I thought cycle slips might cause the error. I think you are right, its connected to leaving the app.

I’ve noticed that the problem is intermittent, but frequent. Out of the 15 data sets I have with the RS2s I’d say I’m seeing the issue on 10-12.

Yes, I agree. I think my student did not leave the app but the smartphone locked the screen and he had to reconnect.

I have 5 obvious cases in 60 survey points.

Unfortunately the number of seconds of the offset seems to be random.

Sorry for the delayed response!

As far as I can see, the issue in this analysis of the data lies in the way you identify the points that cluster around the survey point.

Please note that both these data sheets were collected, as you have reported, in a single mode. It means that the accuracy of these measurements is meter-level. So, technically, the points you claim to surround the survey point may be from the measurements of another survey point.

For example, the purple points surrounding the L2stn1 survey point on your picture could be actually recorded several minutes later than the survey point and later were averaged to become the L2stn6 survey point. That’s why there is a difference in their time - they belong to different measurements.

That could also be the reason why the PPK data and the CVS data from the Survey project have a time shift between them: you compare the meter-level accuracy coordinates with the centimeter-level ones. It means that you could have compared different points that, indeed, have different observation time.

thank you for your answer. We are aware of this effect, but we do not think that is the explanation.

Chris also provided enough evidence for that because he is not refering to the clusters alone but to the time of the cluster points too.

This issue might be overlooked because not many people do PPK for the surveys.

Unfortunately I could not make the test I wrote about last Saturday, but I will do it asap.

It’d be great to see the results of the tests to understand what happens and what are the reasons for it.

Let me sum up the issue. I’m afraid I still can’t fully grasp it. Unfortunately, during the month-long discussion, some points might have slipped from my attention.

Below I’ve described the issue as I understand it. Would you mind showing me where I’m missing a point or understand the issue wrongly?

Please, confirm the steps I understand correctly. I’d appreciate your comments on my message to help clear this issue up.