You probably know already, but we’ve had a lot going on in the past couple of months. After a rather long break we are back to delivering improvements to our new beta. Now that Reach has got itself a big brother, the app will provide support for the new hardware as well as deliver new features and bug fixes. Let’s dive in for a more detailed look!

In the last month we’ve been hard at work to make the app run on both devices with the same codebase. This means new features will delivered to both devices simultaneously.

This iteration brings support for Reach RS and its new features: 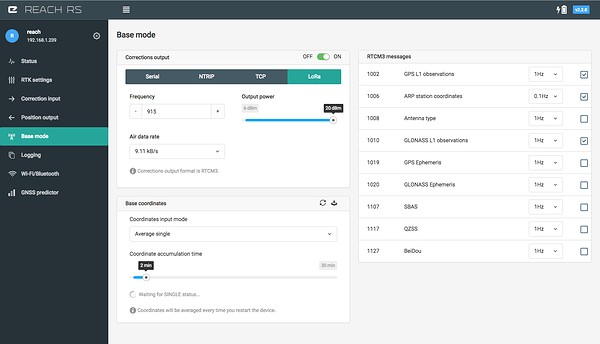 Feel free to leave your reviews and suggestions in this thread.
For those wondering, the RTCM3 fix is coming shortly. Stay tuned!

Big thanks to @Brent_W for the prompt report of the logging issue.

The RTKLIB memory leak issue also affected our flavor of RTKPOST. GUI apps have been rebuilt and reuploaded. The links are, as always, in our post-processing docs.

Some users reported Reach crashing after a short period of work time. Although this seems to be an issue that was introduced with the v2.2.0 support update, the symptoms have surfaced just recently.
Anyway, the updated version, v2.2.3, which hopefully fixes this is out! Please report if you experience similar issues after this update.

The new, v2.2.4 update has arrived! This one brings out a new feature, which will be invisible for the moment: update notifications. When the next update comes, you will get a notification on the status screen.

We’ve addressed the NTRIP issues reported by @Brent_W, @Simon_Allen and @dirkkoller in the new v2.2.5. You should receive a notification about a new available version the next time you start your Reach if it was on v2.2.4.

The new version handles parsing NTRIP tables a lot better with less failures and allow for more flexibility by keeping an option to enter the mountpoint by hand.

We’ve also reworked the antenna offset option in the base position, which is now vertical only. From now on it actually affects the position sent by the 1006 RTCM messages. Thanks to @bide, @TB_RTK and @Luke_Wijnberg for the report.

Edit: forgot to mention, this release also patches ERB to include correct geoid and ellipsoid heights.

Sorry for making you wait for so long

Is the Lora module also available for reach?

Could you give us some information about it?

Looks great. Not sure what fixed it but today after update my fixes are perfect. A good fix within seconds! I am however experiencing what appears to be a bug. I guess we’ll see if anybody else reports it. As soon as I open my “logging” screen while recording “Solution” I lose my fix. It seems like just opening the “logging” page resets everything, AR Ratio consistently drops down to 0.0. I tried it on both modules and I got the same results, so I’m sure you’ll hear more of it if it’s a bug. Thanks guys!

Would you please post a link to the image for v2.2.0? Even with a fast Internet connection, the update has failed many times without success. I have to update 6 Reach devices and it looks like it’d be faster just to flash it.

Rob, preparing a new image will take some time for us. Where does it fail during update? Do you have decent internet connection? It takes about 3 minutes for me. The files are delivered via CDN, so there should be no geographical differences.

I switched to a different wireless router and the update succeeded. It was failing at the lora step before. I’ll let you know if I have troubles with the other Reaches.

We are investigating the issue, thank you for a speedy report!

LoRa not yet available on Reach module, software support will come there when we make the hardware available.

I guess we’ll see if anybody else reports i

@dicky XYZ coordinates are in ECEF. Z does not have to match.

We’ve confirmed the bug with the logs tab. Working on a hot fix right now.

Is that mean, I should use lat lon coordinate?

We’ve confirmed the bug with the logs tab. Working on a hot fix right now.

Sorry, I don’t understand what a hot fix is? How to use it?

Hot fix is something Emlid is working on, a minor update.
I prefer lat and long

Should we push update button for minor update?

I think it will be public announcement