Hi all, very much enjoying the RS2 and while I can understand the limitations compared to the leica equipment I normally use in terms of functionality, one feature I would really like to see is 3d quality displayed in real time during RTK surveys. You can see it after you observe a point but I would like to see how it is while walking around the job site, near obstructions etc. Is this a possibility?

Thanks for your request!

Do you mean the estimated accuracy of the Reach’s position in RTK? These values are displayed in the Status tab. To access them from anywhere in the app, you can simply tap on the status bar.

If it’s not exactly what you had in mind, please describe your request a bit. How would you like it to be? Which functions should it perform? It’ll help me fully understand your request and pass it to the team.

Yeah you can check it but you dont want to be going out of the survey screen all the time, I’m suggesting something like I have on my CS15 controller all the time in the survey tab of the reachview app 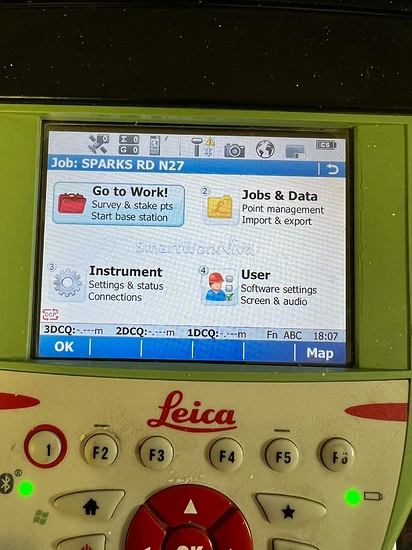 Thanks for sharing the details.

Now it seems I got you. It’s indeed convenient to always have accuracy values in front of your eyes. I’ll discuss your request with the team, and we’ll check what we can do here.

Just want to add that we indeed value your feedback. So if you have any more suggestions on how we can make using our receivers easier, don’t hesitate to share them

Here’s a request. After inputting a .csv file of points into a project with a defined project projection and geoid, instead of manually inputting the previous days base station coords in geographic and ellipsoid heights, simply select the point for the base station and viola !, have the base coords in the linear system (feet/meters) along with orthometric height.

Also when starting a project and selecting the projection system, have the averaged based coords in the linear (feet/meters) with the orthometric height.

This needs to be done… too much confusion in inputting geographic coords and ellipsoid heights.

The current method is not user friendly !

Wow, what a bunch of requests! Thank you.

I’ve checked them and now can update you that they are already on our roadmap.

I see that described options are indeed needed. Storing and loading base coordinates from the project may prevent typos as you won’t need to enter the base position manually. At the same time, the limitation for using geographic coordinates and ellipsoidal heights only for the base may require additional transformation, which can be confusing. So it’s a fair request to us.

However, exact ETAs for them are unknown even for me. All that I can say is that these requests are already passed to our devs. So now it’s their move

Storing and loading base coordinates from the project may prevent typos as you won’t need to enter the base position manually.

Storing/loading base coordinates in any format will work for me!

Your +1 is also noted

Well if i may add one other.

In the Base Mode initialization, when using the Manual option, being able to select a Coordinate System to input a coordinate from a chosen system. Very requested feature amongst brazilian costumers, since almost everyone uses SIRGAS on their surveys.

Exactly… like you said. Let’s get away from geographic/ellipsoid values. These values are useless for land surveying while collecting points. If you set up your project in a selected coordinate system with either feet/meters and start the base, the coordinates should display the N/E/H components in feet/meters of the project coordinate system.

If you’ve imported points (feet/meter) into the project coordinate system, you should be able to select whatever point and use it as a base.

This needs to be implemented if Emlid is trying to attract the surveying industry to use their receivers and app. You shouldn’t have to buy a 3rd party app like FG to use a common sense approach as explained.

We take into account all your requests! Thanks again for the detailed explanations. It indeed helps to understand what is needed and why it’s needed.

Also, we have an idea of a workflow you can try for now with our new Base Shift feature:

As a result, you will use your benchmark local coordinates without its transformation to LLH format.

I know that it sounds more like a workaround, but why don’t you give it a go?

Another request I would like to add is to have quality data (DoP, Age of differential, etc) displayed while taking points on the survey screen in RV3. This is important to ensure quality data!

As Polina said, environmental conditions such as yours is challenging for any GNSS receiver. I have suggested to Emlid to have the PDOP values visible on the collect screen… this would be an invaluable indicator of a bad
“fix”. High PDOP values indicate poor satellite geometry for any receiver if showing “fixed” solution. I would not trust it

Surveyors really need to have RV3 ding or make some sound when collection is complete and stored.

Also having some simple cogo functions.

It would be nice to have some info like our Javad receivers. 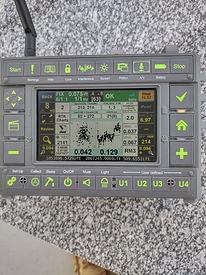 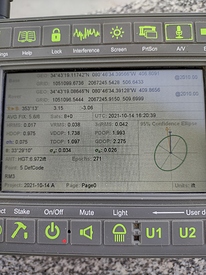 I’m not trying to compare a $2,200 receiver with a
$10,000 receiver. Emlid has developed an excellent low cost quality receiver that myself and others really like. Non users and surveyors wanting a low cost introductory receiver to enter the GNSS world are impressed by Emlid’s receivers. However, many potential buyers are surprised by the lack of features in their software that a land surveyor really needs in the field. Such as confidence in a fixed solution, basic COGO functions and the issue I stated above.

Yes you can buy a third party software for the issues above. But that is an additional expense at a minimum of $1,000. I wouldn’t mind if Emlid charged an additional fee of $500-$750 ? , if they developed a good COGO suite of functions. Maybe Emlid could incorporate a basic version of microsurvey fieldgenius into their software. This could be an option to buy in addition to the receiver if wanted and still be a low cost solution for land surveyors. I know they’re listening to us and I really like their products … and they have come a long way since the introduction of their first receivers.

The issues above needs to have a high priority in their software development in order to really disrupt the big manufacturers and attract land surveyors to their products.

Nice to see all your suggestions, thanks!

I’ve noticed 4 new requests, so here are my comments on each of them:

I think I understand what you mean. Such a feature is indeed helpful to track the quality of collected points. I’ll pass this request to the team, and we’ll think about implementing it.

As I get it, it would help to understand that point is collected without watching the screen. So I see that it’s useful as well. In general, we have plans to implement such a feature, but there are no exact dates for now.

Hmm, it’s something quite new. Jason, could you describe this request a bit? Do you need it for some specific projects? How do you see using such a feature?

COGO features are on our roadmap. However, implementing them requires thorough research. So we need some time for it.

in addition to PDOP the AR validation ratio would be perhaps important while surveying.

I add my +1 to all of these requests, and would like to point out that you can have the best of both worlds for the first 3 features (at least) by having an “Advanced” section in settings & allow the user to turn them on or off as desired.

Hmm, it’s something quite new. Jason, could you describe this request a bit? Do you need it for some specific projects? How do you see using such a feature?

If you are conducting a feature survey and want to pick up a string, lets say edge of footpath, you would want the description to remain prefilled from the last user input until you change it. Currently the description box clears itself after each point picked up. This would save users a lot of time not having to input each time.

It’s an interesting idea to put these features in the Advanced tab. Thanks for sharing it! This way, the app will remain easy to use, but it allows to work with more parameters as well. I’ll pass this request to the team for further discussion.

I’ve noted the comment about displaying the AR validation ratio as well. So you may be sure that it wasn’t missed

If you are conducting a feature survey and want to pick up a string, lets say edge of footpath, you would want the description to remain prefilled from the last user input until you change it. Currently the description box clears itself after each point picked up. This would save users a lot of time not having to input each time.

Cameron, thanks for the explanation! But I want to double-check that I understood it right. Let’s say you’ve collected the first point and named it as “footpath 1”. Do I get it correct that you’d like the app to suggest a “footpath 2” name for the next point?