@RickJ Did you find the menu icon on the top of the app? 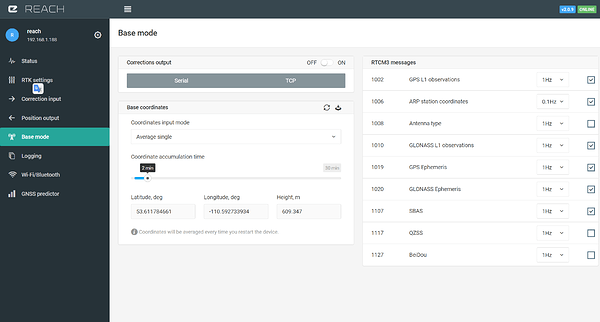 And if you click on the menu you will see links to the screens with all the functions you are looking for. If you do not see them, please post screenshots. 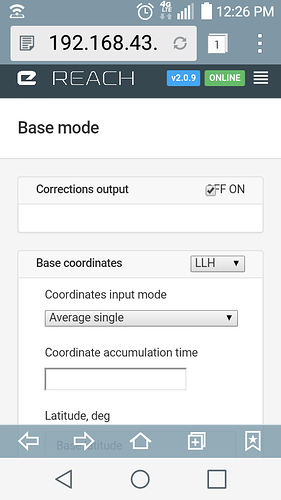 Don’t get communications link info and seem to loose configs.
Is there somewhere to set ports?
I was not selecting RTCM messages because the selection boxes where offscreen on my pocket phone.

When I flashed the base unit, Windows said it could not format the Edison F file after completing reflash. Can this be a hardware problem?

Could not connect to a strange name wifi (name included a *) with a very long password including letter other than 0-9 and a-x.

No change in ReachView. No Correction information. All data configurations show only internal receiver connection.

Only setting for mode is Kinetic, No Stable or Single Mode. Only solution is Single.

I would revert to previous image, but last Version while showing Fixes with good resolution gave meter+ errors in ENU on both Reach and postprocessing.

I abandoned the smartphone WebBrowser and went to Firefox on my Ubuntu 14.04 Trusty OS 32Bit,

And guess what !! The initial view shows the missing Connections SetUp screen. I tried Chrome on my smartPhone, but could not access the Reach units. Same problem with My Windows7 WebBrowser. Any suggestion?

Next step is to see if if there is FirefoxWebBrowser for Android & Test it.

I have no idea why the some of the WebBrowsers don’t work with this Beta Version. Obviously, there is some incompatability somewhere.

I am now using Firefox Browser with Android. Entering “192.168.XX.XXX” in Website search where XX.XXX or XX.XX is your rover and base addresses.

By the way, the GNSS Predictor appears to be working. Nice Feature!!

Cannot connect to open WiFi. “Create” button is not clickable. Only tried from Android phone.

Thank you all for the useful feedback!

-GNSS predictor does not update coordinate in real-time, but it is not needed as it is for an area.
-Reach naming allows big letters, but no special characters. This is reasonable because it is used for device local name, access point name and is buried deep in the OS. We do not want issues potentially caused by special characters.

Please do not use default browser on Android, it does not support many modern features. We do all of our testing on Chrome and Firefox. These should work well.

Which version of RTKCONV did you use?