I’m a farmer in australia and I’m currently putting together an agricultural GPS guidance system and automatic section controller for my sprayer and seeder. I’ve purchased an emlid reach rtk pair and a pair of RF Design 900+ radios which are currently hooked up via uart and I’m powering the reach unit by USB.

What I need help with is the software for my guidance system requires nmea strings gga, vtg and rmc to be fed in via serial rs232 and I’m wondering if other people have done this? Can I use a uart/serial adapter like this

Or do I need something a bit more upmarket?

Can I have the rfd radio communicating via the uart port and then also run the nmea output via the other uart port? Or will I have to do something with usb?

The reason for rs232 output is because a lot of pre existing agricultural gps equipment communicates via rs232 and I’m trying to make my system backwards-compatible with older gear but it will be handy to have the Bluetooth if I ever decide to try an android guidance app.

I am using plastic enclosures and patch cables to create something that is hopefully going to be weatherproof for both base and rover. The rover is going to be moved between vehicles and once the automatic base initialisation fix is sorted it will be very handy.

I am using a dual boot tablet for my display but I think my software will be running on windows.

Are there any tips to getting maximum range out of the rfd900+? My other rtk GPS autosteer uses freewave fgr900 radios and we can get 10+km in flat country (almost line of sight) and 5km in undulating/hilly country with trees etc. is there any chance of being able to do this with the rfd radios? Before anyone asks, correction by cell isn’t an option because our mobile reception isn’t good enough.

I can find my way around a few things but I wouldn’t call myself a real techead by a long way. Any hints/tips/suggestions/advice is appreciated.

I’m trying to understand if this is possible and what configuration I need in terms of hardware and ReachView settings to make this happen? GPS Base - GPS Rover, RTK corrections via radio Rover NMEA out to geophysical instrument via RS232 serial (no other options exist here on geophysical instrument side) Rover NMEA out to Android Phone via Bluetooth Power to rover via USB Log rover and base too I’ve pointed out on my diagram the integration points where I’m unclear as to whether this is feas…

you can read here for using uart for rfd and output…

Does somebody use rfd900? you you tell me something about coverage/reach in praktikal use with standart 3 dbi antennas? regards Andreas

if you can use higher duty cycle in your country (100 %) you can decrase airspeed look here:

I think you are on the right track. Likely need to use both Serial and USB for your setup.

Adapter you linked should be OK for UART/TTL to RS232 for your Reach to ag equipment interface. Then use USB to UART for the Reach to RFD900 connect. Use something like this to convert from Reach to radio:

This is the SparkFun USB to Serial Breakout for the FT232RL, a small board with a built in USB to serial UART interface. This little breakout is built aro

You can supply power in via the other DF13 on Reach. Just don’t power your Reach twice.

I have not tried the RFD900’s. Heard good things. For best results be careful of fresnel zone for your base antenna location. You will likely need to get that radio/antenna pretty high to clear fresnel zone. E.g. for a 5mile/8km link you need to be at least 50ft/15m over highest obstacle. Here’s a calculator (they give 80% but I would think 60% is acceptable for 900MHz). It will work if you do not, but not as well.

I’ve taken a photo of the setup I am thinking of. Ie. usb to serial adapter, rfd900+ connected via uart. Can I splice my power into the uart interface cable and not upset the apple cart so to speak and then configure reach view to output nmea via usb? 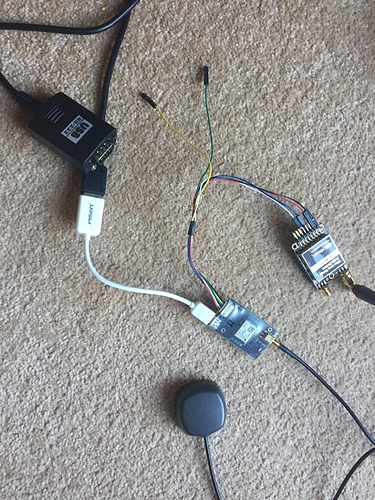 I had no problems bring the GPS string over the uart using a RS232 to ttl adaptor. Just be careful - the uart may want 3.3V not 5V signals. You can buy them for $10. You will need a dedicated uart port for the gps input. Cannot comment about reach RTK and using it with radiolink - I could never get reachRTK to work reliably for me so I now use a commercial ($$$) RTK dual channel receiver with base station.

Mark,
You should be able to bring power in the other DF13 port. The one on the opposite side of the board will take 5V in. Just watch the pins as they flip…

I can’t find anything in the v1.2 firmware to allow serial output over USB but the docs say it can be done with an USB OTG cable to 3DR radio. Might have to be plugged in for the port to enumerate and see it in firmware. I don’t have one handy. However, USB OTG is not a full USB host (OTG allows the Reach to act as either a device or a limited host for devices), so not sure your RS232 adapter will work. You’ll just have to test.

Ah crap…this plan seems to be failing miserably…according to emlid documentation, 9on the rover, I can’t have rfd900 radio on uart to receive corrections from base as well out output nmea strings to a uart to serial adapter…this is a bit of a pain…any other ideas or suggestions are appreciated. Is it not possible to configure the 2nd uart port to output nmea?

Ah crap…this plan seems to be failing miserably…according to emlid documentation, 9on the rover, I can’t have rfd900 radio on uart to receive corrections from base as well out output nmea strings to a uart to serial adapter…this is a bit of a pain…any other ideas or suggestions are appreciated. Is it not possible to configure the 2nd uart port to output nmea?

Mark, you certainly can configure Reach to output to Serial and get correction from Serial as well.

Option 1
Use Usb to Serial adapter and plug it in using a USB On-the-go cable. That will give you second serial port to work with.

Option 2
Route Rx wire from the UART to RFD900 and TX to your AG system.

Option 2Route Rx wire from the UART to RFD900 and TX to your AG system.

Good call. Seems like the simplest way to do it.

@Swoopa These things are largely just RTKLib gateways. Data in on port(s) - GNSS magic happens - data out on a port(s). Magic for you and I, and tech/code/math/science for people with the right skills. I think it will become less magical once the new firmware and docs are updated.

So in theory if I was to run it the way I have it setup in the photo I posted, it should work? (Provided I have the settings correct in reach view)…

If I was to use the Tx line from the uart cable running to the rfd900 radio, how would you configure reach view to receive corrections via uart and output nmea on the same uart port?

A post was split to a new topic: Tractor guidance with Reach M+ and Isobus Terminals