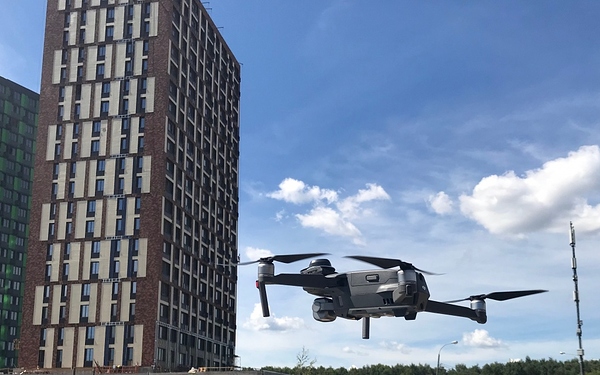 We would like to present the latest development – high precision survey grade drone DJI MAVIC 2 PRO RTK / PPK with EMLID REACH M+ on board.
Light weight survey grade GNSS receiver was installed on DJI MAVIC 2 PRO and connected via advanced Topodrone synchronization system with Hasselblad 20 Mp camera.
With DJI MAVIC 2 PRO PPK you can easily achieve 3-5 cm x,y,z accuracy of orthophoto or 3D model without using ground control points (GCP)
DJI MAVIC 2 PRO PPK has been tested in the most demanding conditions of surveying works, such as urban areas and rugged relief of open pit at an operating mining site.

Below you can find survey projects results over Joensuu city, Finland and open pit in Masbate island. 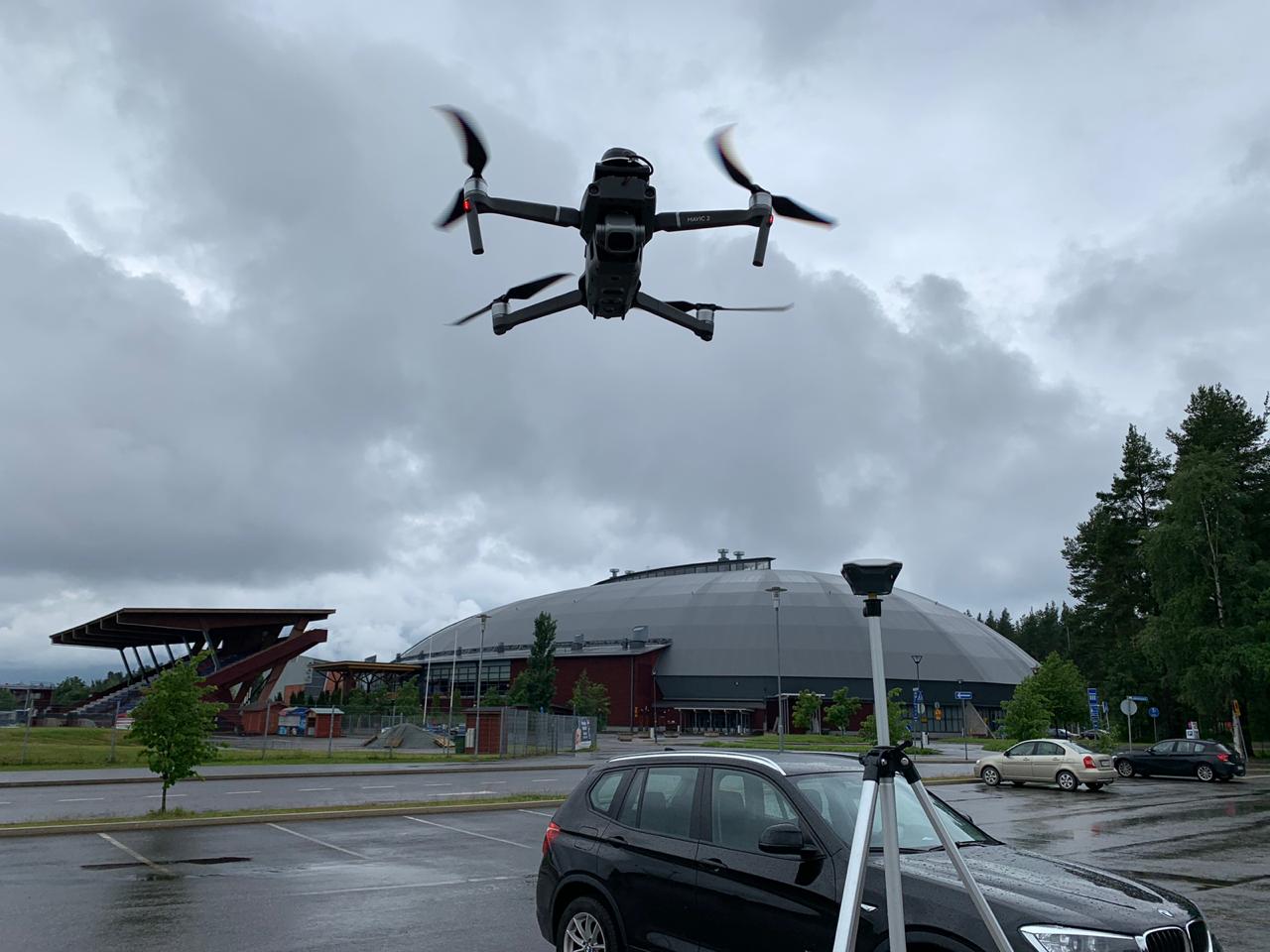 The goal was to create a detailed 3D model and an orthomosaic without using ground control points for aerial triangulation and check the accuracy of the model by comparing with already measured check points on the ground.

Before flights 8 ground control points (GCPs) were set at the test site. All GCPs were captured with a Reach RS+ rover. Corrections were acquired from an RS+ base in RTK mode. 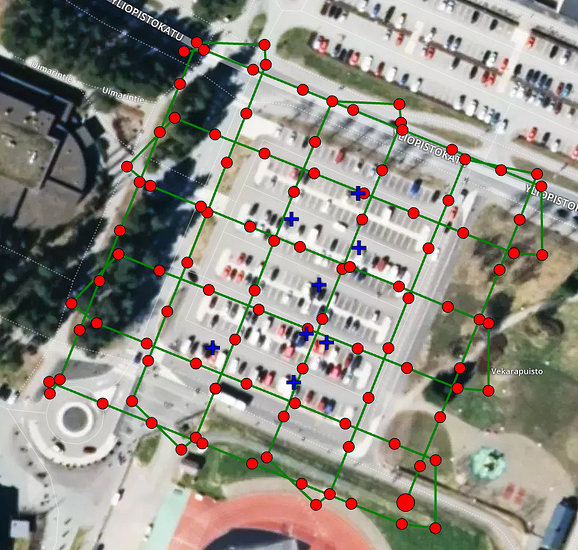 Then survey mission was prepared in PIX4D capture app, double grid mission with 80 % front and side overlapping at 80 meters altitude was setup. Pic.1
Than aerial survey was performed, whole process took less than twenty minutes, at the same time REACH RS+ base station was collecting raw GNSS data for further processing.
After flight, raw logs from the drone and base station were downloaded and post-processed using the geospatial analysis RTK LIB and TOPOSETTER software. This was done in order to get precise x,y,z position of each photo. Pic.2 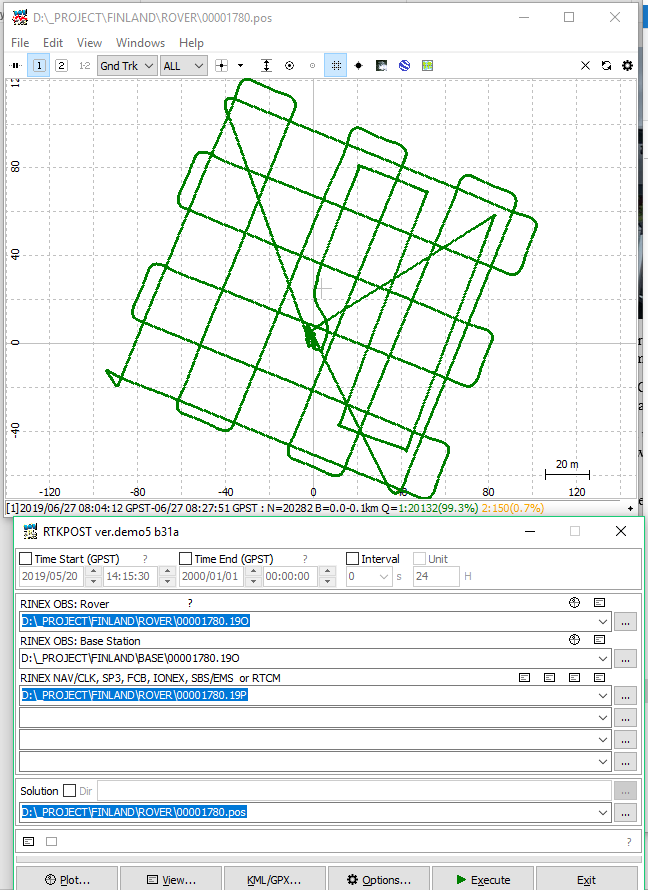 Pic. 2 Processing in RTKLIB
At the next step, institute engineers imported images captured by the drone together with the list of accurate photos coordinates to PIX4D software.

Photogrammetry processing in PIX4D software did not take a lot of time and was made totally in automatic mode, only precise position of images location were used for aerial triangulation.

Once initial processing step of block triangulation was done, eight ground control points were imported to the project to check accuracy. Total RMS error was no more than 3 cm. You can see results against GCPs in Tab.1 Please follow the link to download the full Pix4D report. 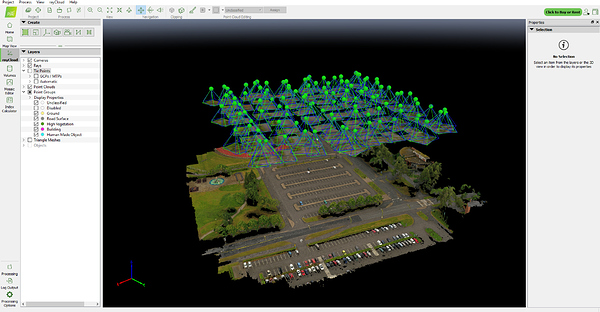 Finally 3D points cloud was generated together with automatic classification. 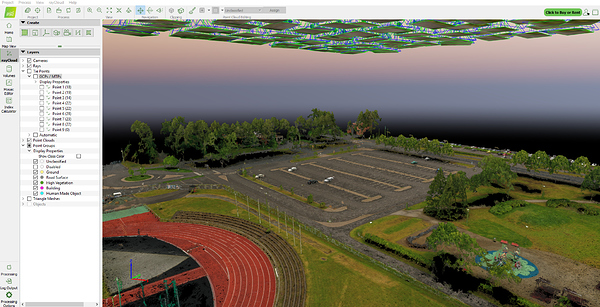 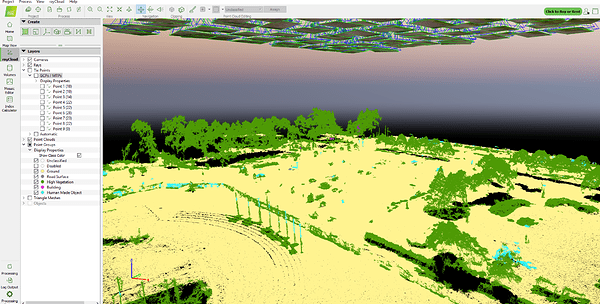 “There is a great advantage in using DJI MAVIC 2 PPK upgraded by Topodrone team. Reach M+ connected by Topodrone synchronization system with 20 Mp camera for capturing photo events with centimeter level accuracy converts DJI MAVIC 2 Pro drone to an affordable professional survey tool. It allows us to spend less working hours on field works than on a traditional survey, now we don’t need to lay GCPs and because of optimizing the resources of the team, we can deliver the best quality data to our clients promptly. What I also would like to add about DJI MAVIC 2 PPK is that it’s very easy to configure and use.” — Eugene Lopatin, Senior Researcher, International Forestry Natural Resources Institute Finland (Luke) 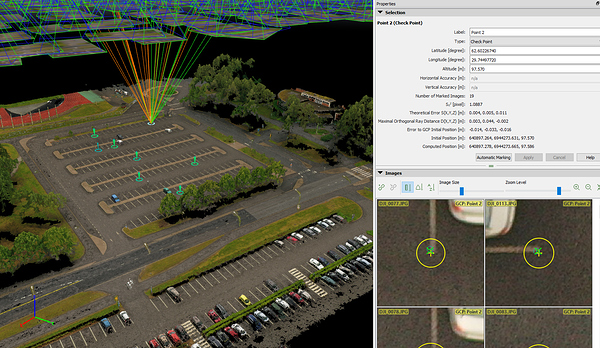 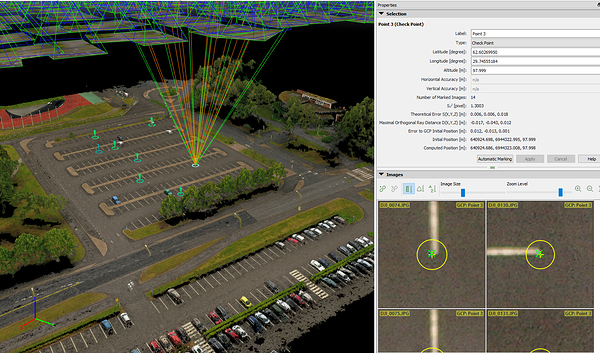 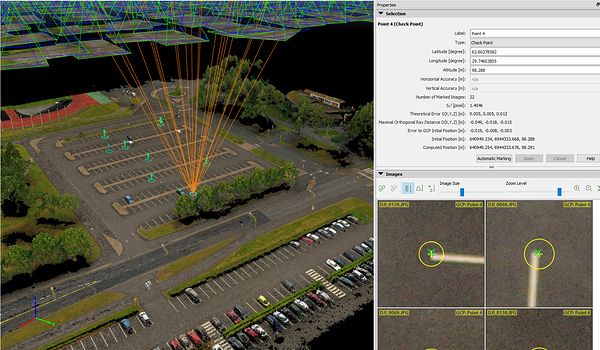 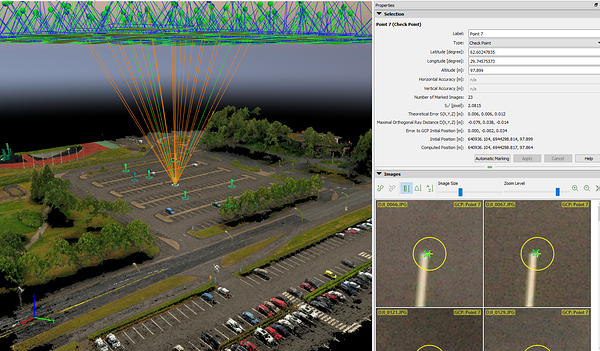 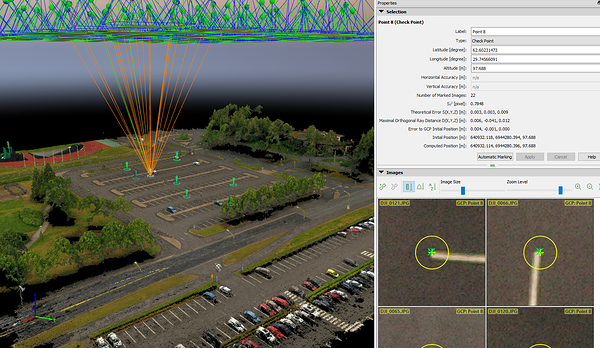 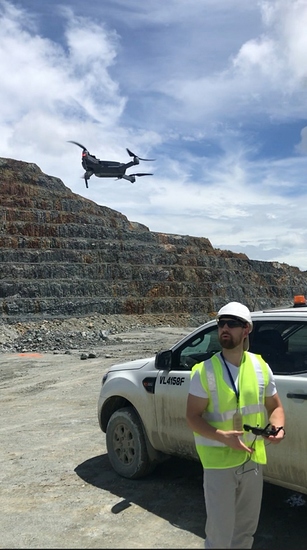 Area of work was open pit with 50 meters depth. Steepness of the pit walls makes it almost impossible to use common RTK survey technics, while measuring by total station would make it possible to get results no earlier than few days after the start of field work.

TOPODRONE SA team together with surveyors from mining company performed aerial surveying by a miniature survey drone DJI MAVIC 2 PRO PPK with additionally installed a high-precision Emlid Reach M+ on board and Emlid Reach RS+ GNSS receiver as a base station. 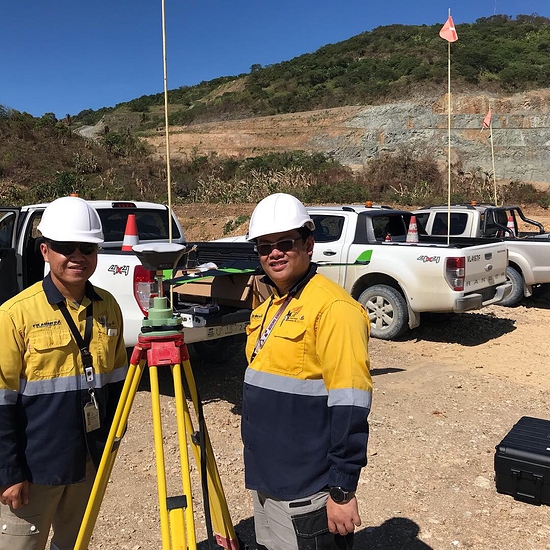 Pic.1 EMLID REACH RS+ installed as a base station

The flight time was no more than 20 minutes, aerial survey was carried out fully automatically, at 90 meters altitude. Flight routes were planned taking into account the double-grid technology, which allows to obtain more detailed textures of steep surfaces.

After field works, the following dataset was obtained:

As a results of the GNSS data post-processing in RTKLIB & TOPOSETTER software, high-precision coordinates of the image centers in the WGS 84 were calculated and finally converted to the local coordinate system of mining site using LGO software. 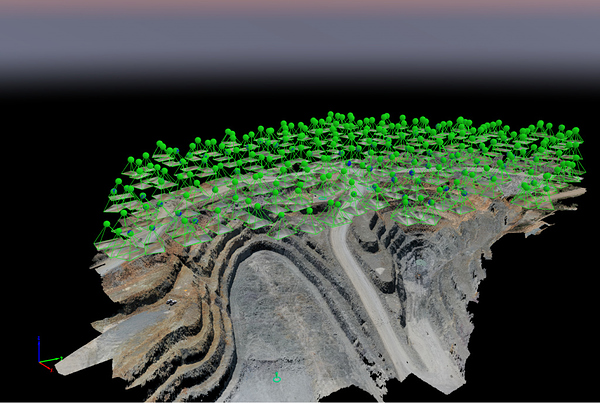 Once initial the block triangulation was done, 3 ground control points were imported to the project to check accuracy. Total RMS error was no more than 4 cm. You can see results against GCPs in Tab.1

Table 1. Report on the assessment of the accuracy of determining the coordinates of control points

As a result of the project we generated high precision dataset of points cloud, TIN model and orthophotomosaic over hard to reach open pit area.
Thanks to the combination of affordable REACH M+ & DJI MAVIC 2 and advances PIX4D processing technology we substantially decreased number of field works and It took us just few hours to get accurate final result for volume calculation. 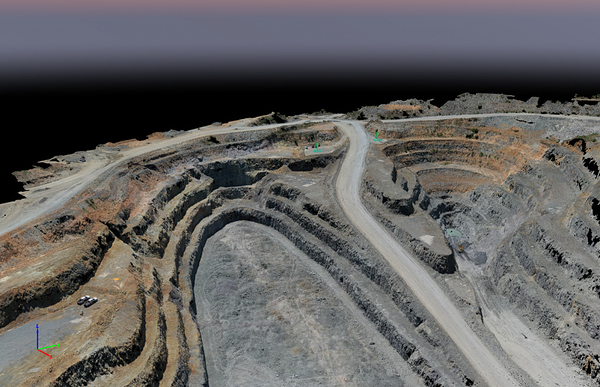 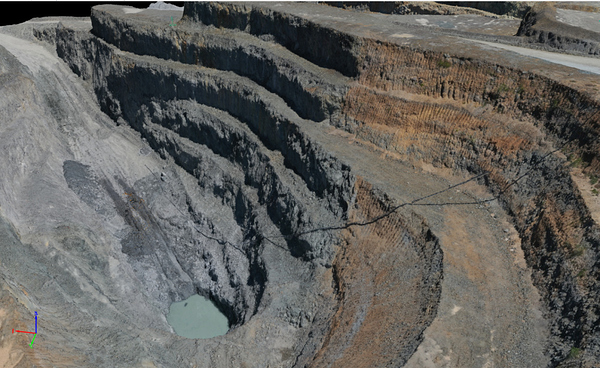 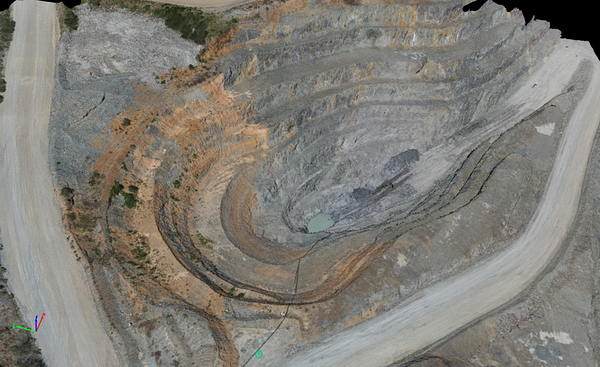 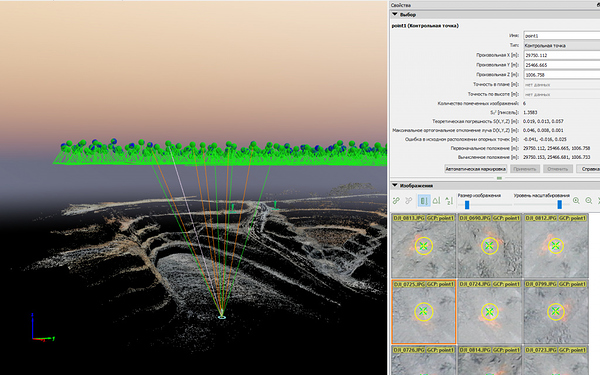 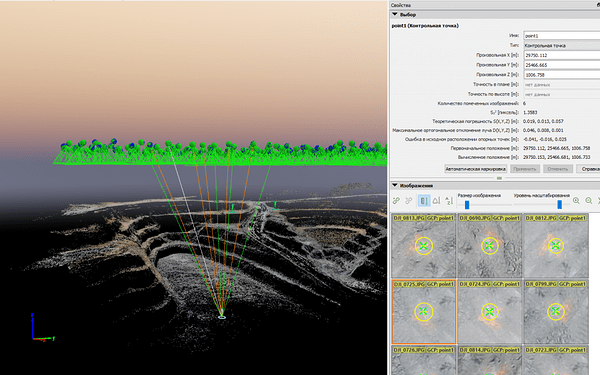 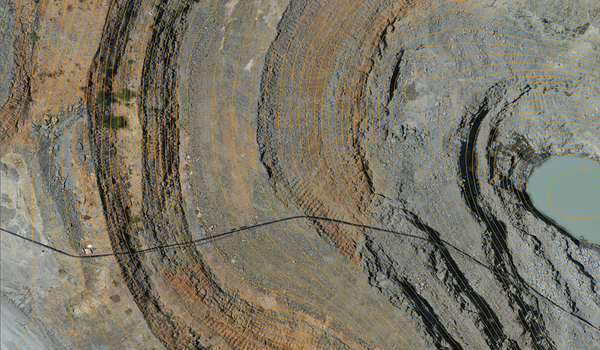 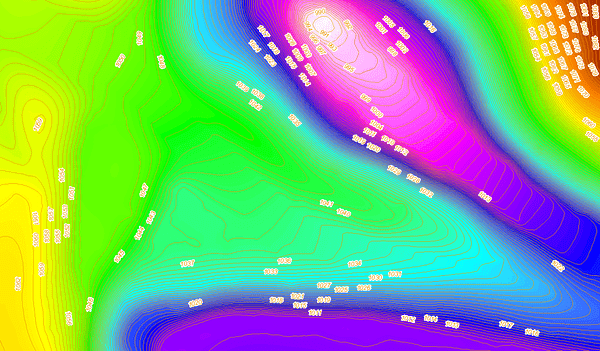 Finding a way to totally eliminate GCPs is the Holy Grail of modern topography.

It’s true that, in recent times, GNSS receivers have become increasingly smaller and cheaper and it’s true that, today, it’s possible to be able to geolocalize precisely every photo taken in flight.

I have many doubts…

It is good, that you have so many doubts, I would suggest try our systems by your self and I will find out that recent technologies of data processing provide very good accuracy and remove rolling shutter cameras distortions.
It is clearly shown in the Pix4d processing report. You may find it in our story above.

I recently did an experiment.

I took a normal Phantom 4 and I flew over an area… but just making the drone stops, for 3 seconds, at each point of shooting. And then I processed all the photos without GCPs.

The relative measurements of the final product were correct. Even the differences in altitude.

The model was scaled exactly without the need for GCPs. Obviously the model had an absolute georeferencing error, but the “measurements” were not distorted.

If the drone flies “high and fast”, to cover large areas with a battery … if what is detected does not have easy features … in my opinion there are many cases in which a couple of ground GCPs make you "safe "…

To say that you can do without GCPs completely is so beautiful… but does it really work in all cases ? This is not a criticism… it is a question I ask with curiosity and interest…

It is not common to promote Mavic as a survey tool. I get one recently and I am amazed by the quality of the pictures. I am still evaluating the survey side of this drone, as its small size makes it so convenient to use and transport. Having M+ integrated inside is a great advantage.
How easy is the integration with your kit ? Do you have docs or video ?

The most common reason for that is its lack of a mechanical shutter, so uses the rolling shutter of the sensor.

There are tools in the photogrammetry apps that can remedy this, but it is far from perfect, and increases processing time by quite a margin.

So, for mapping, mjaaeh… P4P still owns it… which also goes for the video/picture part, Mavic 2 Pro vs P4P.

Now, in order to integrate REACH M+ to Mavic we would suggest to send the drone to our office in Switzerland. Upgrading kit will be ready later.

Yes, you are right. Pix4D software support rolling shutter and as you can see from the Pix4D report data processing didn’t take a lot of time and the achieved accuracy was perfect.

Do you have the dataset available for a trial with Agisoft ? Pictures + PPK cameras location + GCPs ?

Yes this is the classical answer about rolling shutter. But I would like to assess by myself your “far from perfect” sentence. I do not see a reason for software to not being able to handle this type of mechanism.

If you stop the drone each time you take a photo, you won’t have any issues. However, if you take them at 8 m/s you get in trouble with rolling shutter.

So, yes, it is possible, and will create most models, but your efficiency will go down. Denser GCP layouts needed, slower data-collection, longer processing times.

If you stop the drone each time you take a photo, you won’t have any issues. However, if you take them at 8 m/s you get in trouble with rolling shutter.

Nop, you can’t conclude that.
I have done the same experiment with my phantom 4 pro, and also with a M600 with a camera with a leaf-shutter. The faster you fly, the bigger the timing issues between the camera and embedded GPS coordinates (i.e. gnss in-chip processing, trigger signal not being mid-exposure, other electronic/physical delays).
That is why PPK-method is so nice, because you can rid of these GNSS-uncertainties completely.

The faster you fly, the bigger the timing issues between the camera and embedded GPS coordinates

mmm… so you think that the error (without GCPs) is due to the fact that between the creation of the photo (the file inside the memory) and the recording of the position in it the drone moves ?

Consequently a drone that stops at each photo get the correct relative measures because, despite the GPS is not accurate, the photos are geotagged at the precise moment when they are taken ?

Yes, as you can see from the article we have dataset from different projects, but I am not confident that Agisoft supports rolling shatter in proper way right know.

are your datasets available somewhere ?

From my experience, i would say that to increase accuracy with a high flight speed you need to increase GNSS data saving rate, for example with DJI P4PRO in PPK mode it is possible to achieve 5 cm accuracy with 10-15 m/s speed with 10-14 Hz rate.

The errors shown in the examples above are outside of our tolerances so no, you cannot get rid of GCP’s. The other more important reason for GCP’s is to localize to grid coordinates and previously surveyed data.

Yes, as you can see from the article we have dataset from different projects, but I am not confident that Agisoft supports rolling shatter in proper way right know.

it is my gut feel that the agisoft implementation of rolling shutter correction is too good. The projects I have tried it on turn out to be near perfect on every control mark. Which feels a little unrealistic, like an over-parameterized solution. I have no empirical data or examples to back that up.

mmm… so you think that the error (without GCPs) is due to the fact that between the creation of the photo (the file inside the memory) and the recording of the position in it the drone moves ?

Yep. When we are talking on-the-fly image tagging at least. The way it usually works is that the GNSS stream provides an NMEA stream to the camera. The camera then grabs the position from there at the instance of writing to the memory card.
However, the stream will always be a little behind and you have to add the inaccuracies of the Single solution GNSS as well.

Consequently a drone that stops at each photo get the correct relative measures because, despite the GPS is not accurate, the photos are geotagged at the precise moment when they are taken ?

Because of the standstill, there is much less of a position lag. The lag is still there obviously, but the drone is at a standstill, and thus effectively null’ed out.