Reach Firmware 29 Beta 3 is out

Horrible day today and off the bat I will say that I think a lot of it has to do with Verizon’s crubling network in our area. I had no more than 2 bars all day on 4G or 5G and while the NTRIP would login it kept telling me it was waiting on corrections. There are several things that I have had to do on V28.4 since rolling back that are all related to connectivity in some manner. I am having to forget and reauthenticate with networks, kill the Reachview 3 app and reboot the RS2 in order to get it to change from the Reach hotspot to my mobile hotspot. II can tell it is on the mobile hotspot because the Reach hotspot disappears as an option but it is taking at least 10 times every session to get it to show up as an available receiver. Once it finally decides to show up it operates as normal, NTRIP looks good but the receiver stays in single.

If I can get on the internet with another device connected to the mobile hotspot shouldn’t that be enough bandwidth to stream corrections? It feels like Reachview has some authentication and network switching issues.

This update is available for Reach M+/M2 and Reach RS+/RS2.

We added this mainly for the users working in the 3d-party software who could use the files from Reach. For Emlid Studio, you need to export the file from ReachView 3 to process it in Stop & Go.

I’ll take it as a feature request!

Any reasoning for the underscore being forbidden in the device naming?

It was done to follow the rules of the standards for the correct hostname of the device in the network.

3 posts were split to a new topic: Reach RS2 does not pass booting mode

Changed restriction for device naming: the underscore character (_) is forbidden

All devices will be automatically renamed to the name without underscores (e.g. RS2_Base → RS2Base)

4 posts were split to a new topic: M2 doesn’t turn on after updating to 29 Beta 2

*Not sure where you want this. Move as necessary.

I installed 29 B2 on an RS2 today. And, enabled Bluetooth in RV3 via the Profile button switch.

The install of the firmware seems to be a success and uneventful.

Background. Before the change, A successful connection between my Pixel 3XL and the RS2 via the phone’s hotspot has always been intermittent. The RS2 always connects to the hotspot, but the phone only sees the RS2 about 50-60% of the time on the first try. The Refresh button has never been successful. Only force closing RV3 or rebooting the phone and/or the RS2 works…sometimes. That is why the Bluetooth connection sounds great!

On the Pixel 3XL

After the update, The RS2 still connects to the Pixel’s hotspot without issue, RV3 on the phone still only see the RS2 intermittently, either via wifi or bluetooth. (I use many other bluetooth devices that work fine with the phone and have not had any problems with bluetooth connections)

When the phone does see the bluetooth connection and displays “connected” tapping on Settings results in a grayed out page with a spinning icon like there is no connection. It finally times out (or I can tap the Receivers button) and in both cases, it returns to the Receiver page still indicating it is connected. If I then disconnect from the RS2 via bluetooth, it does not see the wifi option any longer. And then won’t connect via bluetooth again either. If I then force close RV3 from Android settings, I may or may not see the RS2 in the Receivers panel.

If I then reboot the RS2, and re-start RV3, it sees the bluetooth connection. On the iPad when connected via bluetooth, the app is fully function-able unlike with the Pixel 3

It almost seems like that if the RS2 has been running for awhile, the ipad won’t see the bluetoooth connection but it does if I check right after the RS2 has completed start-up. 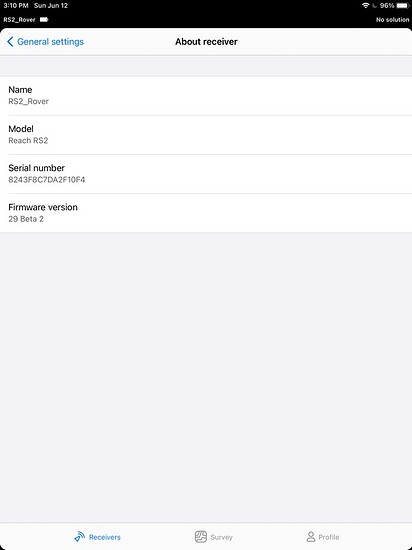 While this new functionality is in Beta, each report is valuable. And such a detailed one is of great help!

Of course, we’ve tested BLE with different mobile devices and OS versions. But maybe yours have some features we need to check additionally. Can you share the Full system report from your unit at support@emlid.com?

And if, by any chance, you have another Reach RS2 or RS+ and can test BLE with it, it would be helpful too.

I just started the RS2 to download the FSR and today, on the Pixel 3 phone, the RS2 was available via wifi on the first try. But not under bluetooth.

The ipad sees the RS2 in both cases and I can switch between them with full functionality.

I received it. Thanks a lot!

More observations using the RS2 on a job today.

The Pixel 3 saw both instances of the RS2, wifi and bluetooth. I worked with wifi and after I completed the job, I disconnected the RS2 and reconnected through bluetooth and this time, everything was functional ! During the job (via wifi) I did have one unforced disconnect in about 40 minutes. But it hooked back up when commanded.

I used the new Base > Manual > Point from Project on this job and it worked just fine !

I was using a P4RTK. At first, I tried connecting to the RS2 via Local NTRIP. This time the P4R would not connect. I switched to Emlid Caster and the P4R connected immediately.

I’m trying to be as consistent as possible with my approach but my results are not always consistent. If it is just me, I guess we can chalk it up to the Pixel 3 being “not ideal”

Maybe it indeed was a one-time issue. Still, we’ll check the report.

About the issue with P4RTK, is it reproducible? Did you connect to Reach’s hotspot or external Wi-Fi?