Position corrections not received by pixhawk

I’m on a significant learning curve and have been struggling with the Emlid Reach and Pixhawk integration. I’ve managed to get the Base and Rover to communicate over wifi with corrections being recognized by the Rover. Its the transition from wifi connection feeding Mission Planner and the Serial connection between GCS and the Pixhawk. Apologises for the amount of pictures I’ve included but can someone point me in the right direction. 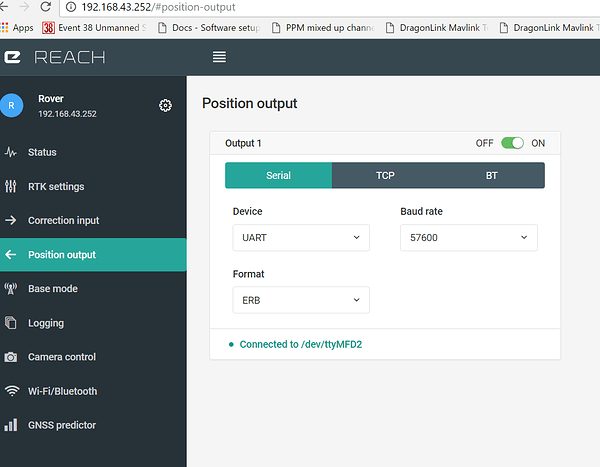 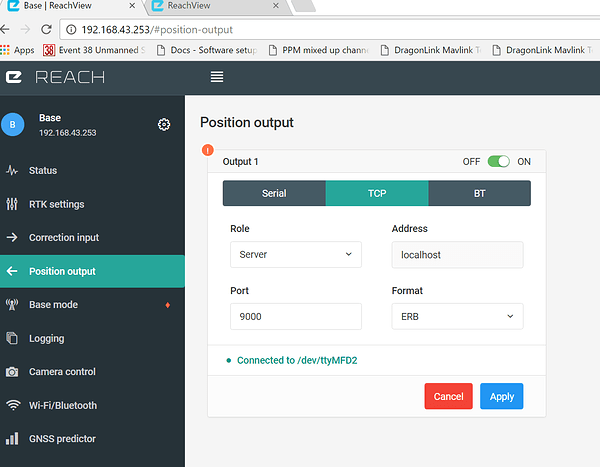 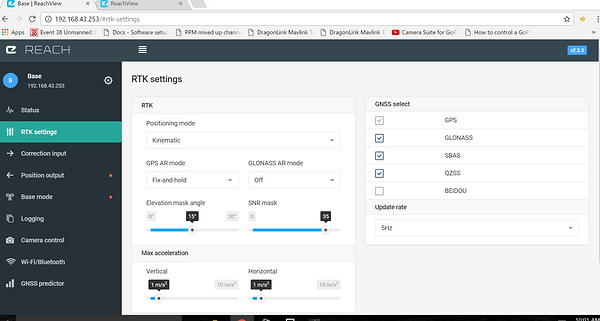 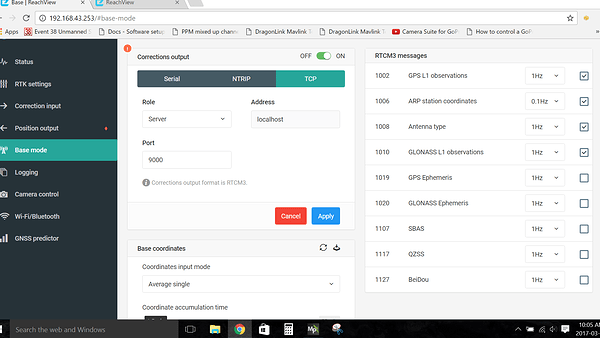 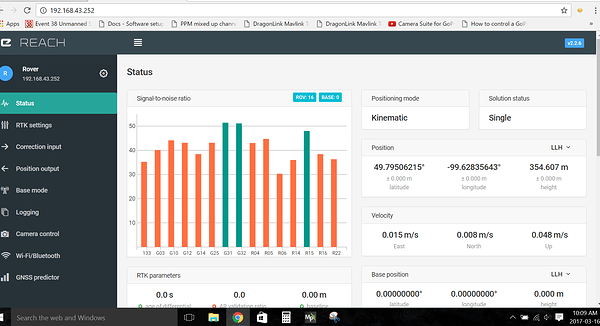 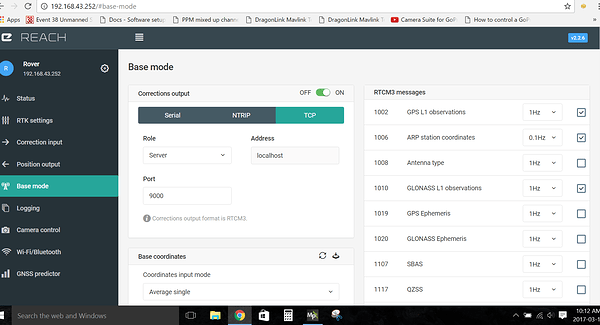 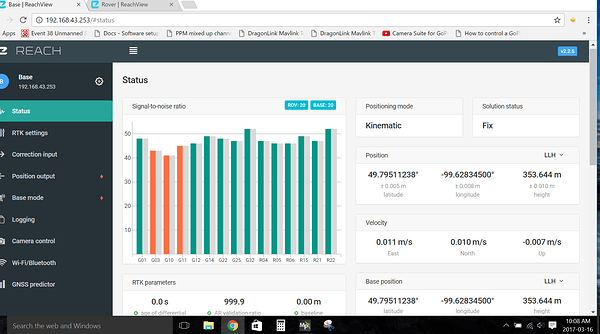 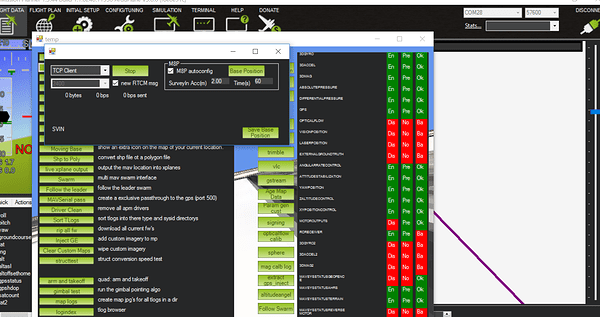 should work now;
also make sure base has finished averaging it’s position before injecting!

Thank you so much, losing my mind
Couple of questions, do I turn off Position Output and Correction Input.

on base it shouldn’t afffect anything if on or off;
turn off corrections input on base;
you can for example turn on position output to bluetooth (pair your phone) and use bt gps on your phone if you need to obbserve base station; or just disable it;

As luck would have it, it started raining so can’t test, I’m assuming if my GCS is connected to aircraft via Sik radios and because we’re connected to MP; this has established the serial link for the reach to pass corrections. MP is up and running but getting no satellites or fixed location with 2 x GPS operating. Although I’m indoors emlid reach has a fix on several satellites averaging 25-30 SNR. Trying to cover all potential issues before field test. Should the Rover GPS push location data through Pixhawk back to MP.

I’ve managed to inject data into mission Planner but data is not being sent being received at Rover and injecting into pixhawk, Hardware issue? 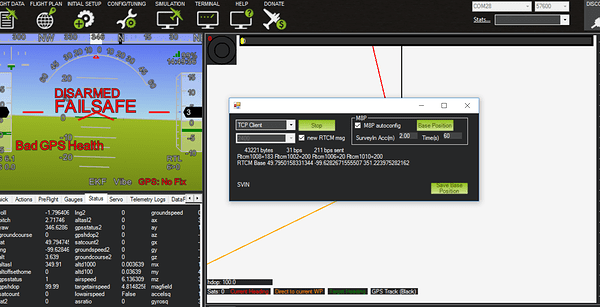 Moved equipment outdoors, have GPS fix with 17 Sats and HDOP at .6. How do I know that its getting corrections from base. When I view Rover within the app I don’t see the correction bars.
When I Connect to TCP I receive the error message as indicate in screen shot, is this typical?

issue nr 1:
you succesfully injected your code to pixhawk - but pixhawk hasn’t initialized reach as 2nd gps;
recheck your cable from reach to pixhawk is inserted to the uart port on reach and the correct pins lead to pixhawk (tx, rx);
also recheck reach rover’s corrections input and position output are configured correctly as I mentioned above;
issue nr 2 (recent posting):
you might have lost wifi connection with reach base station or reach base station’s IP has changed;

I would suggest to remove the tick that says “M8P autoconfig”, it is not related to Reach and MP might expect to hear something from M8P.

I re-checked hardware and wiring seems to be correct as I can connect to MP and I have telemetry data, GPS2 data is now displaying. Within Rover data I don’t see the base corrections displayed, how can I check to make sure correction data is being received by rover? 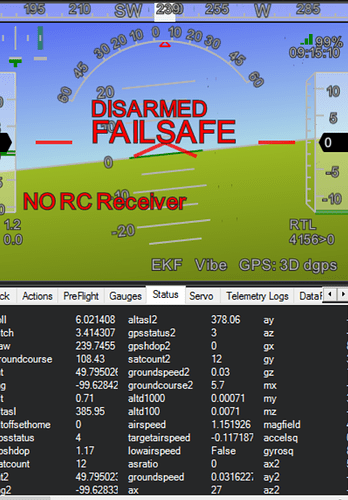 I’ve made the suggested changes and restarted reach and pixhawk, still no base corrections.
Just want to make sure my hardware and connections are not the issues.

try to connect tx to rx and vice versa (transmit pairs with receive);

Same problem here. Using separate radio modules for the Reach, I got a fix without a problem.
Then, after configuring everything to inject through the pixhawk, the rover doesn’t get base corrections (no gray bars from the base). However, MP shows data from the base (inject GPS window) and rover (status tab). It’s like the pixhawk isn’t doing its job of sending to the Reach the base corrections.

After many hours trouble shooting finally have Base corrections being injected.
There was a new update for MP which I installed which came with new options within the RTK/GPS Inject function within initial setup page under Optional hardware.
So here are the steps: this is assuming Base and Rover are communicating and you have established corrections over TCP Client and Server relationships. Additionally your telem radios are sync’d and there is connectivity with MP.

My apologies here is the fol on

One more thing I forget to mention, make sure radios are RX-RX and TX-TX for both GCS, SiK Radio’s and Emlid Reach.

I have a question with respect to that wiring of the radios. I have done it for the Base. But when I have the Rover-module on the Base, the Reach is connected to the serial 4/5 port (should those pins also be swapped)? or is it the radio (telemetry out) that should be swapped?

Lastly, I have the Pixhawk-rover SiK radio communicating to the base (both have solid green LED and flashes red to show the transmitting). Wondering if that is the correct wiring because I also need someway to connect to Mission Planner for the GroundControlSoftware

Why do you have this off on the rover?

The ArduPilot integration wiki says you should have position output on…?