NTRIP for Dummies (Me)

I can’t for the life of me figure out setting up NTRIP.
The whole wifi on, off, connect, close app, open app, reconnect, open reachview 3 thing is driving me crazy!

So my set up is:-
2 Reach RS+ units set up in either Reachview or Reachview 3. All firmware, apps etc updated to current versions.
I’m trying to get the base and rover set up and receiving NTRIP connections but if i try and connect the Reach RS+ to NTRIP this obviously means i need to connect it to the hotspot on my phone… but each time i do that it means i lose the connection between the Reach and my phone as i need it for data for NTRIP.

I have an ipad with sim for data so presume there is no need to connect to anything else network wise other than back to the Reach?

If anybody could spare a few minutes to explain the set up process i’d really appreciate it or point me to somewhere with clear guidance as the i’m afraid the Emlid docs do not even explain the process fully taking into account using various devices for connectivity.

Many thanks in advance for your help.

Thank you for the response!
Yes i can see how i’m going to have to use separate devices now which is a pain but there you go.

Can you describe the workflow you want to achieve?

It’s probably how i’ve worded it but you are right i don’t want corrections from both units, i want to use the base and rover but just receiving corrections from one.
The points you raised in the first paragraph are interesting.
I hadn’t even thought of correcting the base with NTRIP for the initial set up and then disconnecting!
So you’re effectively creating your own “known point” at this stage and all work carried out is relative to that corrected location.

So you’re effectively creating your own “known point” at this stage and all work carried out is relative to that corrected location.

So do you disconnect from NTRIP completely once the base has established it’s base coordinates?
Do you set a certain amount of time to collect data. Presumably as average single or average fix?

Average FIX, since you have NTRIP. You can set 2 minutes. From my observation, position doesn’t change much on average FIX.

I’m still falling at this hurdle…
How can i connect to the base for NTRIP corrections.
I can’t connect to my Reach RS+ base without connecting to it via the Reach wifi… but this stops me being able to connect via my hot spot to my phone as it says i can’t be connected via two hotspots…

Setup your phone as a Hotspot connect to the hotspot with the RS+ as a known network. Both are on the same network. Your phone is just sharing data.

Phone is set to hot spot and it’s set to mobile data etc… the phone hot spot is found in the Reachview dashboard under the wifi tab but as soon as i click on it it tells me connect to the same network as Reach… but that just means i have to connect again by wifi because the devices don’t show up in Reachview to connect to.

but that just means i have to connect again by wifi because the devices don’t show up in Reachview to connect to.

Do the opposite. Connect the phone/tablet that you will control ReachView with to the hotspot too. The Reach will be visible once both it and the controller are connected to the cell’s hotspot. Here’s a diagram I drew on one of the millions of papers that litter my desk when a student asked me how he could connect his Reach using RTN: 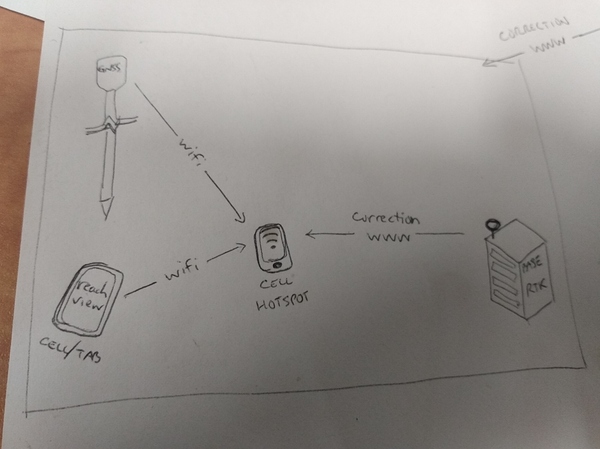 Yep i get that but how do i connect the Reach to hot spot? I do as in the attached pics.
But after it tells me to connect to the same network as the Reach, I then do that, in this case the CAT S61 but they won’t connect. It never works if I try the android or the iPhone as hot spots. 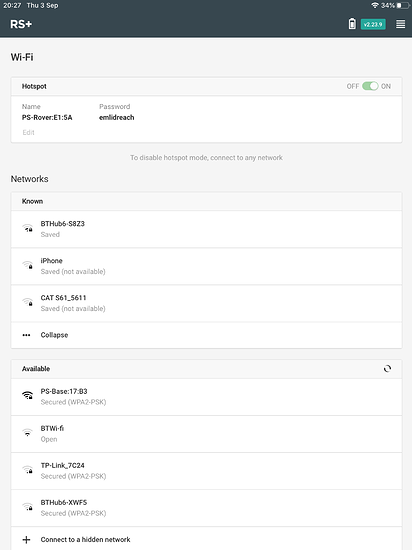 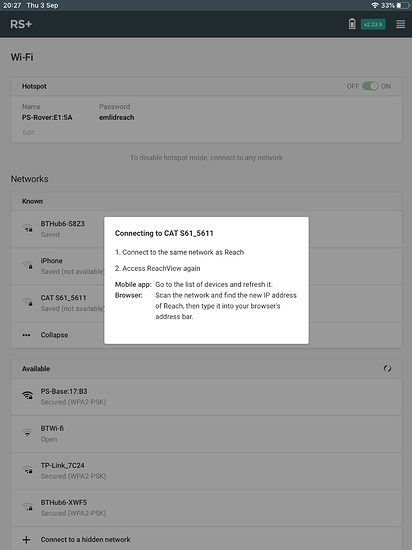 Absolutely nothing is working.
No matter what combination of phones, tablets in wifi, hotspot, 4G etc. I simply cannot get the whole thing linked.

What do you mean?

I’m just saying that rather than correcting from and maintaining an NTRIP fix is not necessary. A local base and rover is always more accurate. I have been testing a service and it is 3-5cm out from our professional localization which is ok for some instances, but when we have 1/4" tolerance on some projects it is not. We need at worst 3cm.

I think you will find a big benefit from a local base even if you cast it over the internet.

the phone hot spot is found in the Reachview dashboard under the wifi tab but as soon as i click on it it tells me connect to the same network as Reach… but that just means i have to connect again by wifi because the devices don’t show up in Reachview to connect to.

Just trying to see if you’re stuck in SSID hell. Are you doing this?

It’s really long winded, but if it’s not done exactly in this order, Reach will try to connect to any SSID it already has in memory. Make sure you’re outside, away from any other WiFi, or make sure you have removed any other SSID entry in ReachView.

Aside from that, I have no idea what might be causing your problems, although with the M+ there was the issue of not having visible satellites that prevented it from booting correctly. So again, try doing this outside.

That could well be my issue!
Thank you very much for that workflow. I’ll try it shortly.
I have seen lots of comments about having to connect everything in a sequence but nobody has ever produced clear guidance on it.
Hopefully yours will work.
Thanks again!