New to Navio: Building an Rover

I am an Dutch IT-student, in my last year of my study and I’d like to build myself an RC rover – Just for fun. I already own an Raspberry Pi and I do have programming experience. However I do not know what parts to buy for the rover. I have virtually no experience in seeking the correct hardware.

I’d like to know what the recommended hardware is for building an rover.

PS: Emlid was kind enough to redirect me to My new rover: I’d like to build something similar but also with something that allows the rover to be controlled via WiFi and/or RC. (I can add WiFi support later, not my main prio)

I haven switched to the Turnigy Trooper SCT and I have added the X4RSB.

The Mini Trooper is really small. It should be a little bit easier to build the rover with a bigger chassis. Since 1:10 is the most common size for RC cars, it is easier to get spare parts for them.
FrSky is the best considering value for money at the moment.
You will want to use a X-4RSB receiver. It is available from many shops in europe.
It is the same size V8R4-II, but uses the latest technology from FrSky. You do not write which version of the Navio board you have, but all of them only accept a combined input signal, where all channel values go through a single wire (SBUS or CPPM for the Navio2). The V8R4-II does not have that feature. You will need a FrSky Taranis transmitter or a transmitter with a JR module bay and a XJT transmitter module.
RC control is usefull to setup and tune the rover in the beginning. Missionplanner GCS has joystick/gamepad support, so you can control the rover over the telemetry link later.

Thanks for the help. I really appreciate it! I am planning on buying the Navio2, I do have access to one in my Uni so that does help.

I haven switched to the Turnigy Trooper SCT and I have added the X4RSB.

Edit: I understand the transmitter now, I either need a transmitter with an JB module bay and the XJT module OR the FrSky transmitter

I am also planning on getting the Turnigy 4000mAh 2S 30C Hardcase Pack battery for the rover.

Be careful with the hardcase pack. I had two of them and one lost a power cable. It is almost impossible to solder them back to the lipo, because the tabs are made out of aluminium. I now use these:
http://www.hobbyking.com/mobile/viewproduct.asp?idproduct=20998

Thanks for helping me! This is what I now have:

as far as I know I am only missing the transmitter, which I can get in an local shop here. Is there something obvious I am missing or is this correct?

You will need some kind of telemetry radio or a wifi dongle to setup the rover and use it with a GCS in the field. If you have a RPi3 it has built in wifi of course, but do not expect great performance/range from it. I had sudden connection losses or high variation in connection speed, even when both sides were stationary in the same room.
I currently use a dongle called CSL-300 with two antennas on the rover. It uses a Ralink chipset and supports a/b/g/n. There is another dongle called CSL-300 on amazon, it has only one antenna, but also has a high sensitivity.

Another thing, I know you will be building for some time now, but do not forget to change the ESC settings. The Trooper is a race car, so it is build to go fast.
I do not have the ESCs manual with me right now, but you will want to change the startup behaviour to the slowest possible setting. The problem with sensorless brushless motors/ESCs is, that they have a problem to go slow or better to start slow.
So the startup feature uses more throttle than you command with your TX to get the car moving reliably. With the default settings the Trooper goes off like a rocket. Fine for a race car, bad for a rover with a payload of sensible electronics.

Thanks for the help. However I have a silly question: is this the correct way to connect the battery? It seems OK to me but just to make sure I don’t damage the hardware or make a short circuit I was going to ask. I do know that the pi isn’t connected yet via the smaller plug. 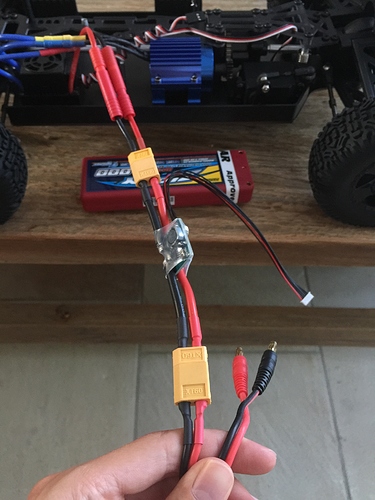 I see red connected to black right at the ESC. If you plug in the lipo the way it is labelled you might kill your ESC. The problem is not a short circuit, but reversed polarity. I suggest to solder the correct plugs to the power module or the ESC. Or cut a battery wire harness in half and solder the power module into it. Only if you have more than one of course!

Correct, noticed that after creating that post. I took the rover to a local electronic hobby shop and they corrected the wiring for me. Everything now connects and powers on as it is supposed to.

I’ll have to install the OS on the pi and install the autopilot. (and change the ESC settings)

Had my first testrun today, haven’t done any programming yet. I have controlled the rover via wireless, throttle is OK but steering is lagging a tad bit. I suspect its either my Xbox controller or Mission Planner. (it’s GPS features aren’t working either, probably software related. Can be fixed.)