I just wanted to share my newest contraption with you: 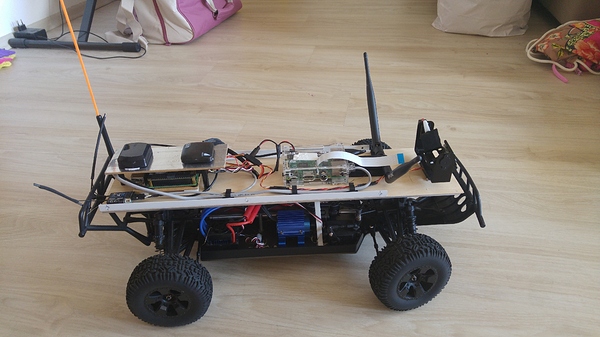 It consists of a Turnigy Trooper SCT 4x4 chassis with a plywood plate mounted to the top. It has two Raspberry Pi 2s, one for telemetry (mavproxy), camera, Access Point and the other one with the Navio2. They are connected via ethernet cable.
The rover has dual GPS and triple compass.
The gimbal holds the RPi camera and the Gopro. The RPi camera is not connected yet, because the longer ribbon cable I wanted to use, seems to be broken.
The cover is made by cutting a PVC airduct pipe in half.
I have a video from its maiden drive, but it is still uploading.

This is pretty cool, waiting for the video.

Here is the first test with guided mode:

And a short mission:

It seems the longer cable for the Raspicam wasn’t the problem. I bought two new cables 30 and 50cm long. The 50cm cable arrived with multiple dents and bends, so I used the 30cm cable. And voila, the Raspicam is NOT being detected.
It only works with the original 15cm cable. I tried all cables, checked the connectors for dirt, did rpi-update, no luck.
Now that I think of it, I remember it stopped working in my Wildthumper Rover with the longer cable some time ago.
Did anybody have such a problem?
Since it works with the short cable, I suspect something is actually broken on the camera module, which kicks the voltage/signal out of specs, with the longer cables.

This might be a bit off-topic here… But I want to build something similar but allow the rover to be controlled via WiFi. Could you give me some tips about hardware?