I wonder if Navio works with this: 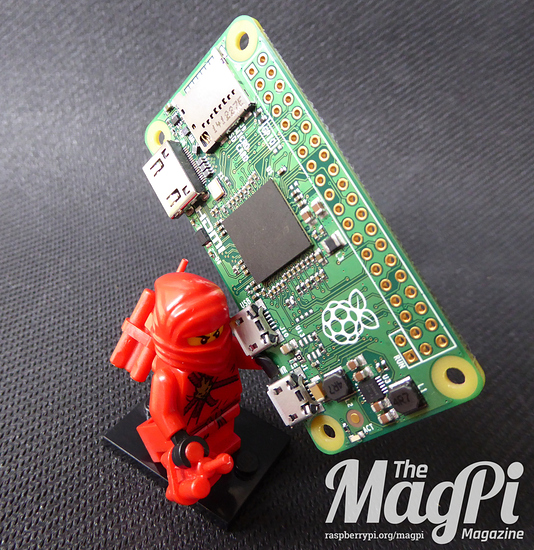 In theory it should be the same from the GPIO/HAT (Navio) perspective, but the Raspbian OS needs a patch/driver so maybe it won’t work with the realtime image.

But it’s so cool, it has to be tested

There are many different mounting options, not only because the header is not pre-soldered but also because it’s so small it could go on top or to the side of the navio or somewhere completely different with directly soldered cables.

This video from AdaFruit explains more:

It is crazy cool! But I guess no Windows IoT support, since it is same processor as RPi 1

Yes too small for Windows but a dream for APM. A lot of weight saved and new ways to pack the kit into airframes.

Good to see the RasPi foundation staying on the ball. It’s a Teensy and Arduino killer! Could even use many of them as co-processors for sensors or complex output, collision avoidance, FPV OSD, etc…

It should be compatible with Raspberry Pi A+/B+, so Navio+ will support it automatically. It is still way less powerful than RPI2.

Came here just because of the Zero. Wanted to ask the same thing. I don’t see why it wouldn’t work.

It’s nice to see that the RPfoundation is listening. The compute module was an interesting release, but for the majority of users it was useless. This was their answer for that.

I’m hoping it does well, not too much of a stretch to see a Pi2 version in the pipeline for a higher price. They’re probably going to wait to see how this sells, get the docs straight, and make sure there’s no issues.

I would call this the ultimate or “last autopilot” !!
I’ve said to a colleague (we were doing cortex-m4 stuff) that one day microcontroller will have no use because of those arm6/7 chips.
He said “you don’t half talk shit sometimes”. Ok he was right but with an RTOS, that incredible price (like an m4) and appart from power consumption maybe I was not so wrong…
If hdmi desolder/signal off for interference and soft iron (will order one and look at brc datasheet for this) + RTOS or xenomai.

You have got the most powerful and hackable autopilot in the world ie: no more down to electrons C/C++ programming like on m4 because you have horsepower so a good HAL. (HAL on stm32f4 is 20 line to blink a led and don’t miss a line or your dead!).

err forgot the topic yes It will work.

Got some of those zeros on preorder, 15 euro (including tax) in Europe which is twice the marketed “5 dollar computer” claim but still cheap (and maybe just for the first batches)

If you look at the trend with the PixFalcon and various other mini/nano controllers popping-up onto the market every day, it seems there really is no need for a full servo header anymore. If the next Navio relied on single servo (signal) wires, SBUS and/or I2C for IO then plenty of space would be free for shrinkage. Just a shame the Pi zero is only the old processor. Maybe it’s not worth it for Emlid to shrink Navio just for that. Latest when the RasPi 2 is available in the zero format perhaps.

p.s. will share my results and make a new 3D printed case design once it arrives. This will greatly improve the fit on my 250 quad and potentially support even smaller frames.

At first I thought this was great, and superlight replacement for the RPi 2 in Navio applications. BUT. Chip is the single core processor (5-7 times slower than RPi 2), and has HALF the ram at 512Mb, so if you are running anything besides ArduCopter/ArduPlane ect… like image recognition software, VPN, or your own Python scripts that it could affect the performance of the autopilot!

Wouldn’t want computing lag to knock my 6lb machine out of the sky. But that being said, if you’re platform is super tiny (suggest less that .55lbs :D) you might want to try and integrate this little guy instead since it only weighs 9g!

Yes that’s true at first look. Maybe it is only something special for smaller drones which don’t need much more than APM running…

But I’m thinking about other combinations for bigger drones. For example effectively using Navio like a “smart Pixhawk node” in an onboard distributed computer system. In simple words a Navio+PiZero together with either multiple other PiZeros and/or full Pi2s.

The PiZero is so small, still with the GPIO/SPI/I2C capability, that it can be used everywhere a tiny tinkerboard like the Teensy would have been used, but runs a full Linux OS, and is much cheaper! That is fantastic, some really smart sensors and failover logic could be implemented.

Maybe it’s not worthwhile in the end besides mini-quads. But I certainly have on the horizon some attempt at a distributed computing platform, like ROS, running with fully autonomous and redundant distributed components. Something like I guess they have in large passenger airlines already. thinking about delivery drones, and things which are not allowed to fall out the sky and cause damage over public places/people

My first project will be to work out which directions are possible for mounting, to get the smallest possible flight controller. Probably a short ribbon cable or directly soldered connections. Which is best depends, which is why I am sure a 3D printed case will be necessary. For example we could tilt the board up and over to consume the same space which is lost because we have PWM headers and the GPS connector sticking up. Then the Navio is no bigger than it’s own original size

This is very interesting. I’ve been playing around with the idea of splitting out tasks to isolate arducopter to insure nothing interferes with its operation. I really need the processing power for my auxiliary functions. The needs of ArduCopter are much less, but its operation is critical.

I use screens to isolate stuff, and insure nothing interferes with anything else, but the worry of a lock up is still there with multiple things running on one piece of hardware.

My plan is to strip the extra bits off a pi2, and use this for auxiliary functions. I was going to use a raspi A, but this looks like a much better approach.

Now if I could find one to buy…

Anyone have a working prototype? Would be interesting to see the performance during flight…

Mine still didn’t arrive. I think the only people who really got one were those who were subscribed to or luck to pick-up the RasPi Magazine. In reality it is not a 5 dollar computer, for example in Germany they want three times the price (still not a lot though) including tax.

As soon as mine arrives I will work-out the orientation/mounting possibilities and upgrade my 250 racer quad. In fact I was hoping this minimization would enable an even smaller example to be built.

I have 2x Pi Zeros. Now just waiting on my Navio2 to arrive. I’ll be looking at using multiple Pi Zeros linked together. Possibly the first zero is running the flight controller software and the other zeros are doing other processing.

There is a lot of hype about Raspberry Pi Zero recently, but we do not share it fully.

Raspberry Pi Zero is not powerful enough to run APM:Copter at 400Hz reliably. It is just the same as it was with overclocked A+/B+ . You can run Rover or Plane, but you will have almost “Zero” processing power left for any other task, even establishing an SSH connection might be an issue.

All I really want is the realtime kernel running on my Zeros. Where’s the best link to an img file that has this ?

I tried the image in the downloads section. My zero is powered up, and I see the power light flashing but I cannot get any console running. Any tricks ?

I think the zero has the most possibility and potential in support auxiliary processes or tasks.

Personally, I would prefer to have more than enough processing power to run apm. Greater reliability and less chance of something locking up.

End the pi zero or edison, etc, which further allows you to isolate the resources dedicated to apm and not sacrifice reliability for capability.

That’s just my take on it though. To each his own.

Can you elaborate your thought about pizero beeing not powerfull enough to drive navio2 & apmcopter ?
IIRC pixhawk processor is a STM32 168 MHz Cortex M4F CPU (256 KB RAM, 2 MB Flash)
erle brain 2 is a BeagleBoneBlack and is supposed to run both APM and ros ?

and what firmware is inside navio2 ? is it open source ? customisable ?

While waiting for my navio2 to arrive, I loaded a debian jessie lite firmware onto my pi zero and then hooked up a HMC5843 3 axis compass to test if I could hook up a i2c device and read it using NodeJS. Loaded node and pi is reading compass data fine.

Not exactly related to the navio2 hardware I know, but I’d never done any nodejs i2c work before

Shortage of Raspberry Pi Zero is enormous.
So, we can wait and watch the result of PXFmini:-)
http://erlerobotics.com/blog/pxfmini/#