Goal was to use Navio2+RPI3 as FlightCtrl. Also wanted a more powerful copter to carry
possibly my Sony NEX3 and it should be foldable for transport.
Anyway after doing some research and calculations i decided to use a E800 Hexa-set from DJI
(found it on ebay for 250euros) and a 6S LiPo (from SLS)
The frame is mostly carbon fibre with a gfk center plate and its foldable (from quadframe).
Motor-Motor distance is about 74cm.
I did not take detailed photos from the construction, since its pretty straight forward i think.
Battery cage i made myself on a CNC.
Problematic was the compass (using an external one now) and current readings where bogus.
But since im using a Jeti remote i have better options like a MUI-75 sensor, so current control is covered too.

maiden flight went well and i took some videos:

second flight not so well. i got a crash soon after takeoff, probable cause was a bad solder connection on the power distribution board.

after rework of the power distribution, got a better power board and used a more powerful soldering iron,
the third and fourth flight today worked like a charm. also had some time to test mission control before it started raining. Using an adhoc network with external wifi and QGroundControl on my iphone6s

thats how it looks folded: 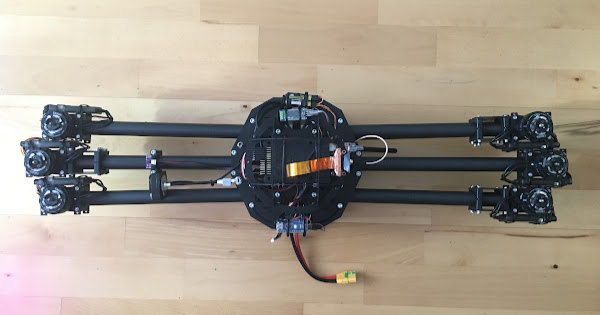 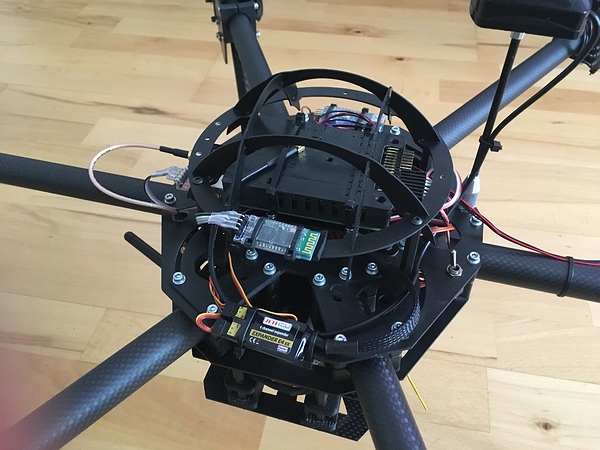 showing a closeup of the center plate, with BT-module connected to USB-to-UART module, JETI Expander,
and part of the GPS-antenna (right side). The switch on the right is to power down the RPI3 via a python script. 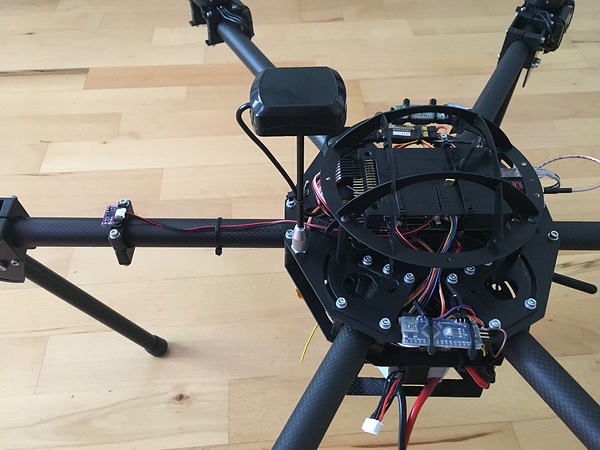 here a view from the other side, in front a ArduinoMini with Mav2Duplex, to transmit the telemetry of ArduCopter to my JETI DC16, connected to Navio2 UART and to the JETI Expander.
On the left you can see the external compass mounted on the rear arm of my copter 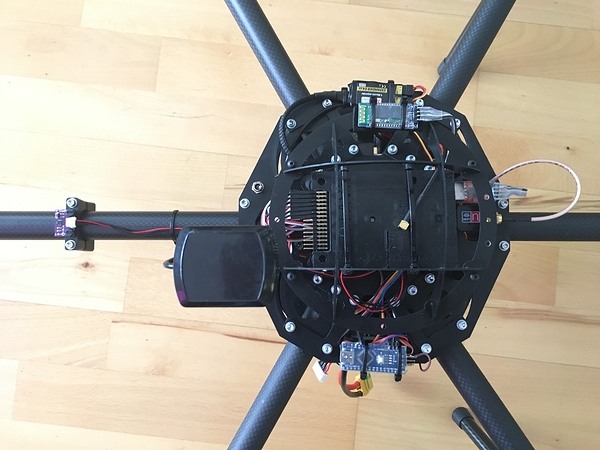 and here a top view, where you can see the wifi-dongle on the right with external SMA-connector 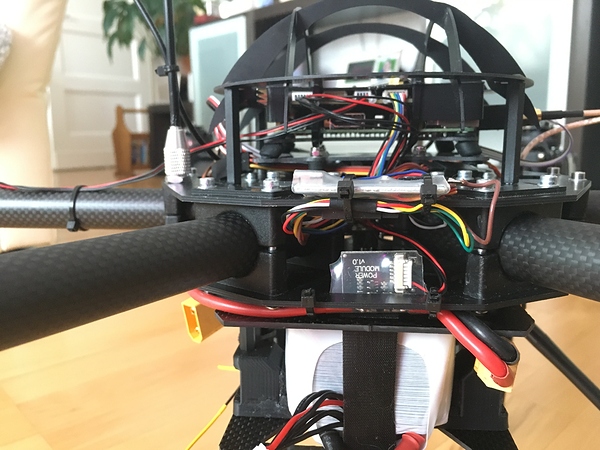 the Navio2+RPI2 is placed on an anti-vibration mount. All cable-plugs I fixed with a drop of hot glue (i dont trust those mini micro pugs

sorry i dont have pictures of my power distribution board, its hidden underneath, but i used this one: http://r.ebay.com/qhgevR

thats its for now
have fun …

Nice! I like that you went with three landing legs, it bothers me that people use four. Have you simulated any engine out’s yet? Looks pretty stable.

thnx, i always use three legs, four legs i found useless since they are always in the way of the camera but
ive to use the + configuration in the x configuration it would not work out.
And yes its quite stable, even with a bit of wind. quite happy with the construction

i used ecalc for evaluating my configuration, from there i can tell that a rotor fail would be fine, but
at the end its up to the arducopter software how able it is to level out one rotor fail.
Not quite sure if it can do that, otherwise i probably would not have the crash on the second flight.
I know for fact that it woks with the FlightCtrl from mikrokopter.de that i can land a hexacopter with
one broken propeller. Its not pretty but its was a controlled crash with no damage, so to speak.
But i dont want to try that on purpose

Great project, thank you for sharing!

Really nice proyect! Congratulations!! I bought a navio2 a couple of months ago but haven’t tried it yet. I’m amazed by the stability shown in your video: it looks as if the copter were completely static. Did you achieve that simply by running the out-of-the-box version of the emlid raspbian image with ardupilot?
I’m not sure I understand what you mean by [quote=“sicherlich_nicht, post:1, topic:5727”]
Problematic was the compass (using an external one now) and current readings where bogus.
[/quote]
Are you saying that your navio2 was “faulty” and that you had to add extra sensors? If so, how did you adapted the software to account for those sensors?

yes the copter is very stable, with GPS and position hold. But also without GPS it flies very nice and smooth.
im using still an old image from 2016, i believe its the emlid-raspbian-20160718
only thing i updated to arducopter to 3.4.3 at that time. works fine for me so i dont see any point in changing or
updating to the newest image yet. maybe i try it out on a new sd card sometime

the onboard compasses are very much influenced by their surrounding electronics it seems. so i always got prearm error for inconsistent compass values. lot of ppl have those problems with navio2 it seems, for that matter also APM with internal compass has this problem, so i dont think its a faulty navio2 just a general design flaw.
the only reliable solution is to connect an external compass to the i2c bus. its supported by software, same for APM and pixhawk better to have it mounted externally, far away from the battery and its main cables.

the navio2 does not seem to read the current sensor of the power-board correctly, my guess it has something to do with the pullup resistors at the ADCs, they are different from the ones used on the APM. you need to draw much more than 5A to get some kind of readings. needless to say its very inaccurate. better go with a proper sensor like the MUI from jeti (if you use jeti). otherwise you need to rely on the voltage readings only and your flight time to guess how full the battery still is. for a small copter thats ok, but for that big hexa i wanted more accurate readings, guesswork is not my thing

I have the same problem with those stupid compasses.
Could you post a link to th compass model you use? I would also be interested to get a link fro the frame and the weight (is it this one https://quadframe.com/collections/sixcopter-frames-sets/products/foldable-pro-sixcopter-frame-with-25mm-tubes?).

im using the one with 21.5mm Tubes (https://quadframe.com/collections/sixcopter-frames-sets/products/foldable-heavy-sixcopter-frame-with-21-5mm-tubes)
its a little lighter, the weight he is giving is correct, aprox 850g i measured if i remember correctly.
the total weight of my copter including LiPo is 3.2kg, LiPo (6s 7Ah) alone aprox 950g

yes the compasses suck, but its expectable. same problem than with the APM with internal compass.
there is a reason why they moved it to the GPS-module

anyway essentially you can use any i2c compass you find on ebay, i bought this one but i cant find it anymore at the moment, but maybe you find a similar one:

According to the data sheet this compass supports 1MHz i2c? Is that true or did you change the i2c settings of your Navio2??

i didnt change anything
just activated compass 3 and deactivated the other two, and calibrated it of course first. after calibration reboot is needed
orientation you have to set depending how you mounted it.
i if you mount it as i did (on the rear arm, as its shown i one of the pictures above) no orientation settings are needed
Best
Helmar

Hi sicherlich_nicht.
I can see that external compass is installed not quite correctly because there are power supply cables in the tube. Your copter looks stable.
Did you use CompassMot calibration?

it is correct, since the power cables are coax, and it doesnt need motor calibration, works like that

Thanks a lot for your detailed answer!! I was going to ask you about what externall compass you used, but @tobias-dahms went ahead of me.

I think I’ll be ordering one for myself too.
Why did you need accurate current readings to detect how much charge you have left in your battery? (this is probably a silly question, but I’m new to all this). I guess that, as voltage drops, current will increase (to mantain a constant power), so you could relate a rise in current consumption to a drop in voltage. But if you can measure voltage directly, as I think you implied, what is the point of this?

voltage drop cant tell you if something is wrong, e.g. a bad motor drawing to much current or anything else.
and the sensor automatically integrates current over time. if the battery is in ok mAh and voltage drop
should be related. if you have both readings you can see immediately if there is something wrong with your battery.
its a matter of safety, for a small and light copter i would not bother much, voltage readings would be sufficient, but if this one comes down …

Any chance of getting a closeup of the battery cage, curious to see how you made it look like with the CNC

i dont have a photo at the moment but I can post a screenshot of the dxf file: 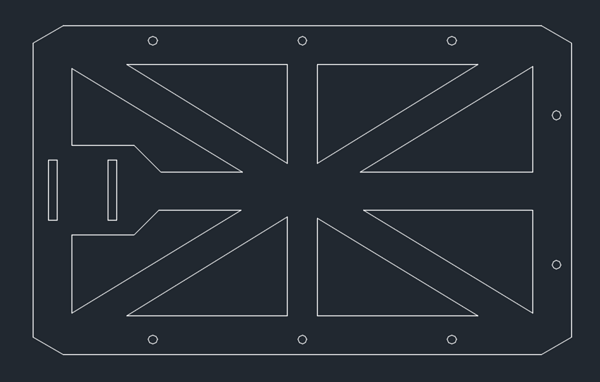 sure, here you go
LiPoCage.zip (1.2 MB)
you need hex nut spacers from aluminium or nylon to connect two of those plates.
the holes are made for the hexa-frame im using (link s.a.). the cage is connected to the frame by using 4 vibrational dampers. i intend to mount a gimbal underneath the cage. depending on the size of you LiPo you might also need
some spacers. I uploaded two stl files together with the dxf. They are made for the LiPo im using, but you can modify them for your needs, if you want.