Hello, super newbie and inexperienced here. The answer probably is right on mi nose already, but I can’t figure what might be causing my problem.

I have an RTK RS+ bundle and I don’t know how to make them work in manual base mode.

I have seen the quick start guides, and they seemed pretty straightforward.

No problems with the average single-mode whatsoever. I set the base, run it and average the base position for a few minutes, startup the rover and get fix status without issues. That’s how I’ve been working since the beginning.

Now that I need to use the base mode in “manual”, I can’t.

Is this a configuration problem? Can someone tell me what am I doing wrong?

Thank you, much appreciated all the help I can get.

Sounds weird ,and you didnt move the base?

I think so too. The base was not moved from the spot. I just turned it off and on again.

I agree with David, it’s odd. The only thing that comes to my mind right away is that you possibly entered a comma in coordinates instead of a dot. In such a case, Reach can drop the coordinates and doesn’t save the position.

If this is not the case, please share the screencast of the issue: a video usually saves us a lot of time of troubleshooting.

Again, this is why I think there needs to be a “saved base location” feature. Manual entering leaves too much room for error. Even if it is only one location that could be downloaded/uploaded via Reachview it would be a very nice feature.

I am sure I used the point instead of a comma, Tatiana. I will try to make a video and show it to you guys. I hope I can make it as clear as possible.
I didn’t mention it before, but when I save the coordinates in manual base mode, nothing happens, RV3 doesn’t say that the base has been launched, no prompt at all.

There are only 4 fields to fill; latitude, longitude, height, and base height, am I right? am I missing something?

I’ve noticed that the rover showed ‘No solution’ status in your test. To work in RTK, the base and rover should calculate at least a Single solution. So, they should obtain clear signals from several satellites.

To understand if the lack of satellite data can cause this issue, please tell me if the base corrections can be applied when the receivers have a clear sky view 30 degrees above the horizon.

There are only 4 fields to fill; latitude, longitude, height, and base height, am I right? am I missing something?

I will try to make a video and show it to you guys. I hope I can make it as clear as possible.

Thank you! If placing the units in an open area doesn’t help, we’ll need to check a video to understand what’s happening.

I’ve noticed that the rover showed ‘No solution’ status in your test. To work in RTK, the base and rover should calculate at least a Single solution. So, they should obtain clear signals from several satellites.

I believe that satellite coverage might not be the issue. I get fix status when I “average single” the base. But I only get single status on my base, and not solution in the rover, when I use “manual”.

I will give myself some time to capture the video and hopefully find the solution. I am guessing the problem is me haha, that’s why I ask for help because I can’t see what I am doing wrong.

Thank you for your help.

Which format did you record the coordinates? LLH / ellipsoidal height or XYZ? Did you enter the correct same format after?

Is your BASE antenna height and ROVER pole height correct?

I am sure I used the point instead of a comma, Tatiana.

One minor mistake sometimes can affect the whole workflow badly. That’s why it’s better to exclude the possibility of such obvious things from the beginning

Waiting for the video, then. I’m sure we’ll figure it out.

I have been using LLH. The coordinates I used were the same as the ones I got from the previous base run in “average single”. I measured the antenna height, and the rover pole has been kept the same, 2 metres plus the adapter.

I will go to a clear area and try to record what I am doing. I am sure that I am doing the steps incorrectly, I hope to identify them and avoid them as much as possible in the future. Thank you timd1971

I just created the videos and captured a few pics of my base setup.

I hope you can understand them. I just learned how to screen recording, I am an English as a second language without practice in a long time person, and on top of that introverted and nervous.

I recreated both scenarios. the first one is made by averaging the base position. And the second one shows my attempt to connect the base in Manual mode.

Don’t pay much attention to my step descriptions, I might get you more confused.

These images show my base setup. It is cloudy and probably we will get some rain later in the afternoon, however, I managed to get fix status when I averaged single the base in the first scenario. 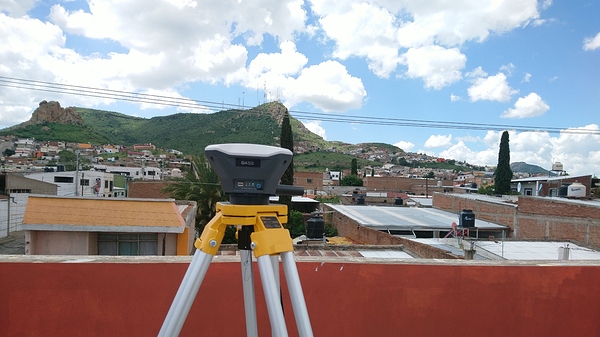 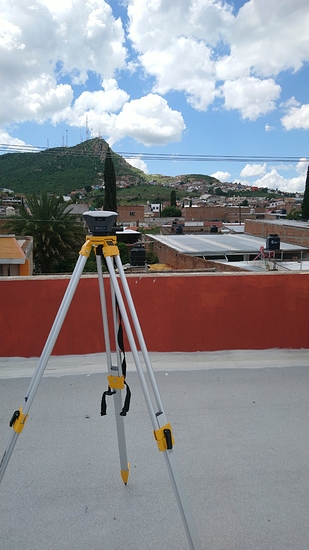 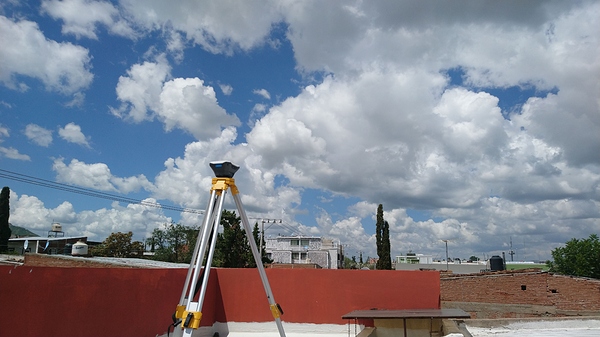 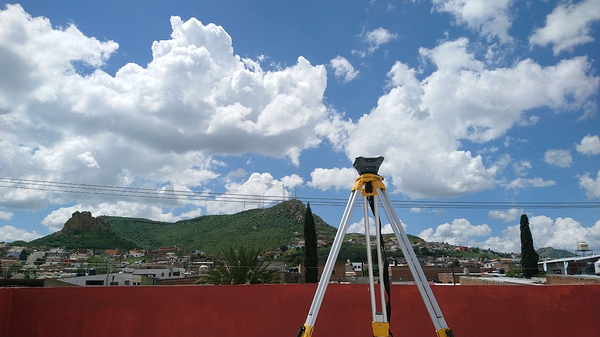 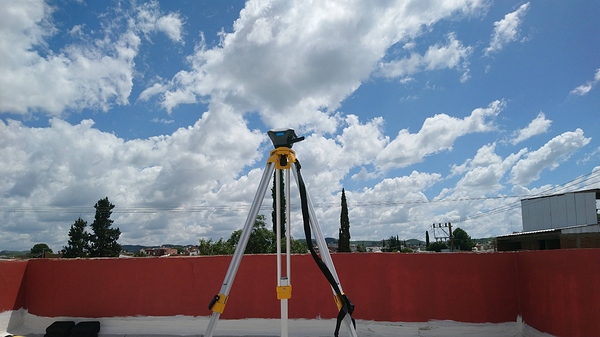 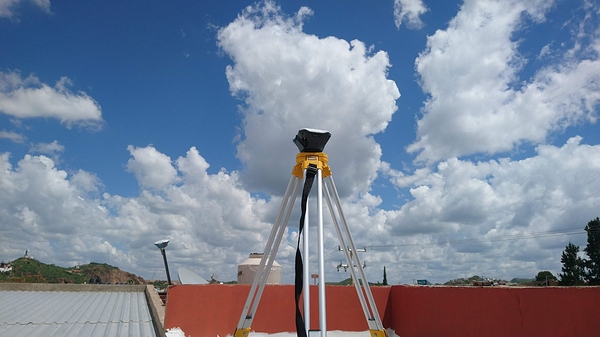 This is my first video (If you think I need to make more videos, please let me know). Here I am trying to explain what I do when I average single the base. I paused it so you don’t get to see the 6 minutes that I averaged. 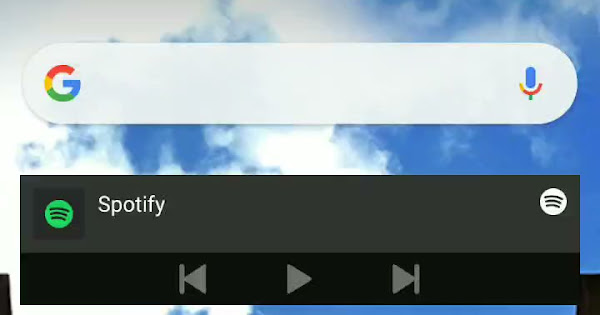 In the second video, I continued averaging the base and captured a point in fix mode. 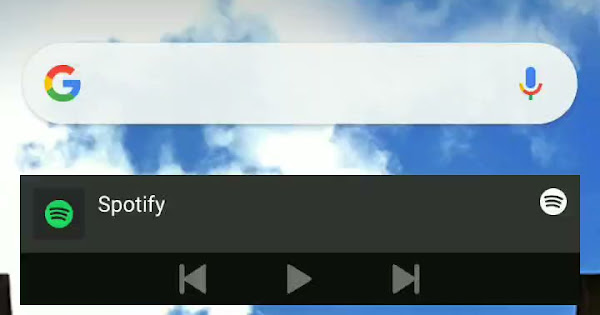 In the second scenario, got a little confused with the new firmware. I updated both rs+'s yesterday and the interface has changed drastically, at least for my videos. I couldn’t get a nice video flow, but I managed to get to the field input screen.

The coordinates I got in average single mode were these: 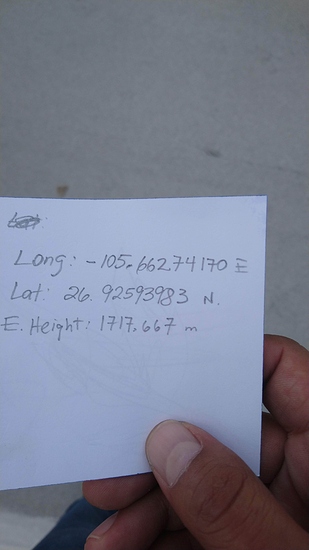 The base height was measured to 1.54 m. I didn’t write it on the paper but that was the value I obtained.

The third video shows the second scenario, where I try to connect the base in manual mode. 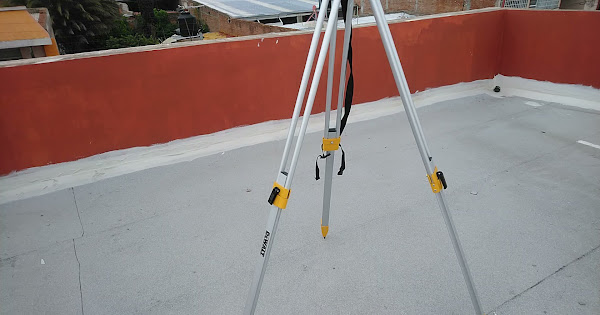 In the fourth video got all mixed up and confused, I decided to not show it at first, but I will show it to you because I entered in GNSS settings. I will leave it here so you can see my configurations. 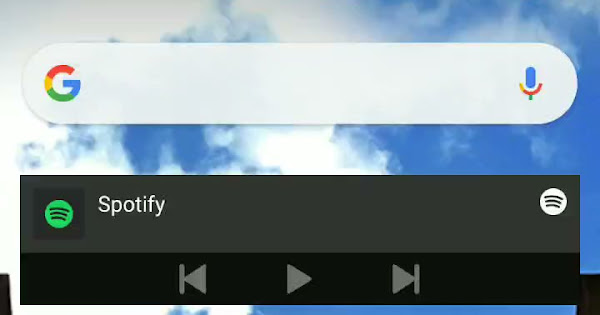 Lastly, in my final video, I show the data field inputs and the result. 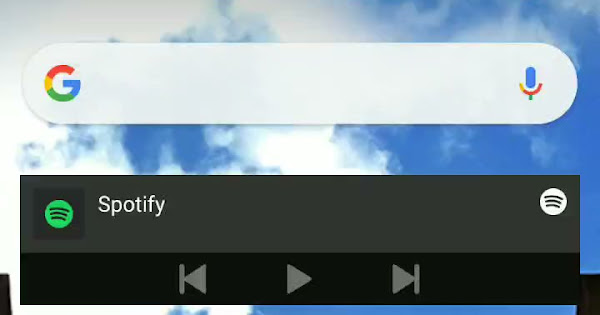 I have attempted to connect the base in Manual Mode on three occasions. The first time, the rover showed, single-mode, the second time, showed no solution and the third time, today, again, shows a single-mode connection.

Should I wait more time? should I expect a prompt letting me know I input the coordinates successfully?

Again, thank you for your greatly appreciated help.

Not sure if this helps, since u said u got a fix with this particular set up… but I know I use a small 12" or so extension pole on the top of my base tripod to get it up more and also so the LoRa antenna can be vertical instead of horizontal.

Again, not sure if this will help any, but something to think about.

EDIT: BTW, your English is quite well… probably better than some English speaking people! Ha! ; )

EDIT2: the cloudy conditions shouldn’t be a problem. Powerlines will though, especially if close by… but may not be the problem. You have very good clear sky view. It may be your settings.

Your settings that you show so far seem ok. But
I think you should show your other settings such as the GNSS constellations chosen and the messages and frequencies used.

You can also save a simple system report and post here for others to take a look at.

Also, for your ROVER, you’ll need to wait a minute or so for the rover to FIX. Make sure rover pole is plumb bubble level vertically also. Typically 2 min is sufficient for the base to average.

Also, with these single band RS+ units, your rover is going to have a hell of a time getting a FIX and measuring points next to buildings, trees, under canopy etc. The RS2 $$$$ is more fit for that if you find you are in those kind of conditions a lot.

On this link, you can see my configurations, I think I haven’t changed any values.

Acceptable time for RS+ to get a fixed status Getting started

Apparently, they all seem ok. I see that you made some contributions to the thread already lol.

Thanks for the English compliment. I usually read and listen to English, however, by the coordinate that you see here, I don’t get to speak much English.

I have the pole extension, however, when I use it, for some reason, it doesn’t get vertical. Probably I need a tribrach. I already have it on my shopping list.

We get a lot of sun, which is nice, but I will try and replace the system once I get a hold of some good knowledge, and I obtain more practice.

Thank you for looking at my videos.

I have the pole extension, however, when I use it, for some reason, it doesn’t get vertical.

It’s probably the Dewalt tripod. I have a different style Dewalt tripod that does that same thing, the extension not plumb vertically. I think these Dewalt tripods are more for laser levels. I have a surveyor tripod with standard 5/8" thread that works well.

Not entirely sure due to your region, but you may not need QZSS??? you can try toggling that constellation OFF along with the QZSS 1 Hz message OFF. See if that gets you a faster consistent fix? U may need to reduce the message Hz frequencies also. I.e. from 1 Hz to 0.5 Hz.

Another thing u can try depending on your region area and number of satellites in view is a sometimes toggle between BEIDOU and GLONASS. depending on time of day, one may give better results than the other. Use the GNSS Viewer predictor app you have there and check out all the satellites available at the time of observations. It may show QZSS isn’t even in view??? You’ll probably get a bunch more BEIDOU satellites than GLONASS.

I think so too, I bought that tripod believing that it would be good enough for the Emlid base, but now I see that it is for something else. I will keep looking for equipment so I can make a nice set up.

What is the QZSS constellation used for?

I am still waiting to know the satellite apps, I have the apps but I don’t know how to use them yet, haha.