Great thank you for the fast reply.

Ublox Ucenter has the function to flash firmware. If the Reach is connected to Ucenter, then a user should be able to flash the firmware.
You can access the M8T via Ublox Ucenter by ssh into reach module and then running:

@lewissw We are well aware of this

But we would prefer not to force our users to do update this way and that’s why we are working on an automatic update utility built into ReachView that uses Ublox flashing protocol.

ok! what is the effect using galileo for reach. does it help to getting better solutions?
at the moment i am working with gps only > for me best an stable working!

I think Galileo will be more value in the future. It is still being deployed.

I believe that Glonass and Beidou will have more potential for now.

Galileo does have some changes in system design that should help under less than ideal situations( under poor sky views?). For now, I think it will be not first choice, but may add better performance in a few years.

Wow, still no firmware from Ublox. I went ahead and used the 3.01 firmware for the M8N on one of my units and it works well getting the Galileo satellites but you definitely lose the timing messages not sure which is better

. I guess we just keep on keeping on.

We got required documentation and are working on implementing the update procedure. This is being done in parallel with more important features so do not expect it too soon

Igor, I was not commenting on the speed you are rolling things out but rather Ublox. The support Emlid provides their community is impressive and seems to have greatly advanced what would normally be called the lower end GPS field.

what is the status for updating m8t on reach to 3.01.
i think there are many advantages for us users?

what is the status of new reach view?

I have successfully flashed the SPG firmware and Reach works now with Galileo satellites.
Flashing was a bit complicated because it did work just after several tries. Be aware, that there is no way back at the moment.
The selftest during start-up (Ubloxtest.py) will no more work, it has to be disabled.

Hi Emlid team, do I understand correctly that with the new reach image 2.x versions, the M8T 3.01 firmware is used?

Actually, it’s not. After internal tests we discovered that RTKLIB requires some fixing before we can use this new firmware properly.

Here a nice litte screenshot using the SPG firmware from u-blox with Reach and Galileo:
We are all waiting for a public release of the Galileo support. A public base station is used for correction signals. 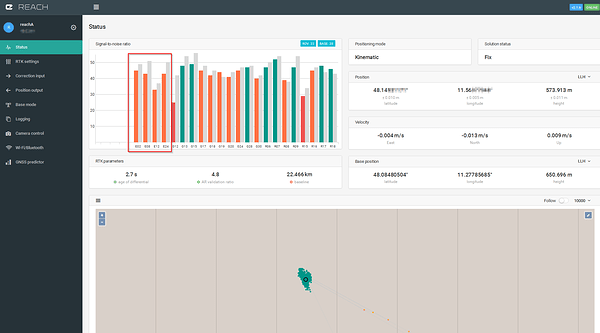 How to enable Galileo UBX messages (if you flashed the new firmware at your own risk):

Thank you emlid, that the preparation is already done, now we are just waiting for the official release

How to enable RTCM3 1097 messages for Galileo:

You should keep an original copy of the edited index.html!
Have fun!

Now that there appears to be a working version of RTKLIB with Galileo and UBlox M8T, will there be an upgrade coming anytime soon? I seem to be able to satisfy my needs for now with the beta 2.2.4, but initial tests seem to show lower time to first FIX and more consistent FIX with GPS+GLO+GAL+SBAS. But, I’ll take any improvement Emlid can add.

It is not clear to me it the M8T needs new firmware and Edison reflash to upgrade at that point.
Appreciate the good work…

I have an ublox neo 6 that i connect to an android tablet. I wish to knwo please what is the right configuration for stand alone positioning