I’m a newbie to this hobby. i’ve done the calibration of the ESC individually. The problem is even after calibrating the motors won’t spin till the throttle stick is half way through.

The problem is even after calibrating the motors won’t spin till the throttle stick is half way through.

Pay attention at the flight mode selected when you move your throttle stick. If in Stabilise flight mode, progression is following stick movement. If in Altitude hold mode (or loiter mode), power is increasing when throttle stick reach the middle.

You may have to increase MOT_SPIN_ARM and MOT_SPIN_MIN if your motor is not running after arming.

@mlebret thanx for the reply

But, i’ve not connected it to any FC. Just after calibrating when i check the response of the motors then itself it’s behaving like this(spin when the throttle is half way through)

Can you post the pictures of your hardware setup? With them, it will be easier to check what is going wrong in that particular case.

not connected it to any FC. Just after calibrating when i check the response of the motors then itself it’s behaving like this(spin when the throttle is half way through)

It could be a bad FlySky TH9X transmitter setting with custom throttle mix (like for a copter?) instead of a clean new plane configuration.

Hi,
if you are running the ESc straight of your receiver and having this problem, then it is likely to be an issue with power supply & setting mismatch.
What type of battery are you using and how many cells? What is your ESC set for ?
Could be your ESC is set for 4 cells but if you only have 2 cell battery connected that could cause a problem. In theory most ESC’s should recognize how many cells are connected, but if you have changed the settings of the ESC this may no longer be the case. Also many quality ESC’s will briefly beep multiple times when power is connected to confirm how many cells it has discovered.
I.e. 3 beeps for a 3 cell battery ,…providing you have correct cell type set.
…You could have yours set to LiPo yet are using NiMh battery back or vice versa.

@kschoelpple thanx for the reply!! check this video which i’ve uploaded showing the behavior of ESC while calibrating https://youtu.be/_GZQNqY2LmI. and the cell used is Li-Po 3 cell battery… and how can i change the setting now?

Hi,
just had a look at your video. Did you buy those motors independently or was it part of a kit?
In my opinion a 840kV motor are more suited to 4S or higher battery. 3S hasn’t got enough voltage to start at low revs. Hence your problem with throttle control.
Just do a quick test: Connect everything and move throttle slightly up, but not as far that motor would start running - just stay slightly below that throttle stick setting. Then try to spin motor by hand and see if it starts running. If that is the case then clearly you’ve got the wrong motors or you have to go for a 4s or 5s battery.

@kschoelpple i bought those motors independently and i tried what you suggested, i didn’t spin when i tried to spin motor by hand and how to change the setting which you talked about in your previous reply?

There are many different ESC out there offering different functions and settings.
You need to find the specific instructions for yours - usually this can be downloaded from manufactures website.
I have one example attached but do not use on yours as it can be completely different and cause more problems if incorrectly set 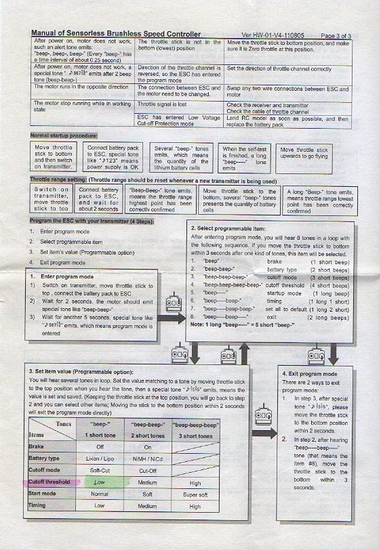 …Just remembered: Some ESC require throttle range to be set. This might be the problem you are having.
In above instructions check the middle section out in regards to “Throttle Range Setting” .
With a bit of luck this will work on your ESC. If not then you definitional need to find and download correct instructions for yours.

Here is a different one.
As you can see completely different settings - Hence you need to find correct instructions for yours
. 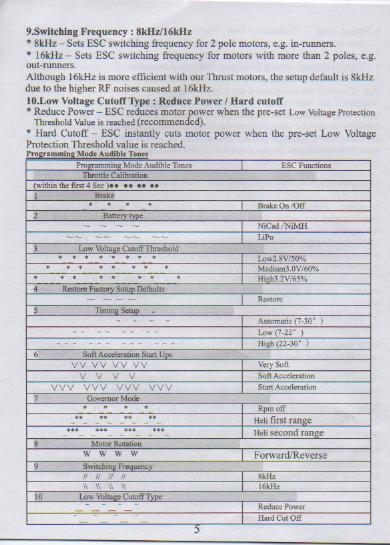 thanx alot @kschoelpple tried finding this sheet for my ESC 20A but went in vain…but thanx alot!

Have you tried the instructions on the first set of instructions I’ve posted?
This appears to be a rather common way of setting throttle settings.
–> Turn RC transmitter on, move throttle to full, connect ESC and receiver to battery / power supply and turn on. Within a few seconds you should get a beeping signal indicating ESC has recorded max throttle values. Then move throttle down and once again ESC/motor should beep. Then disconnect everything and ESC should now be calibrated.

Sorry, you’re right. It’s been a few weeks and forgot about that video.
Have to agree, everything in the video suggests the ESC calibration is carried out as expected. - The only thing I can’t see in the video is if you disconnected the power after calibration? This is sometimes required to actually save the settings.
-In regards to your ESC’s I did have a brief look after my first reply and couldn’t find any information. It appears a importer / wholesaler got those made under own name and imported to your country. You will most likely find that it is just a standard ESC like found on hobbyking.com. Hence instructions from such a place might work with yours.

thanx alot for the relpy!! @kschoelpple I did try it by disconnecting the power after calibrating, but didn’t work either. And as you mentioned at the end I’m using Pixhawk 4 and I’ve also attached !the screenshot of the radio calibration from the mission planner 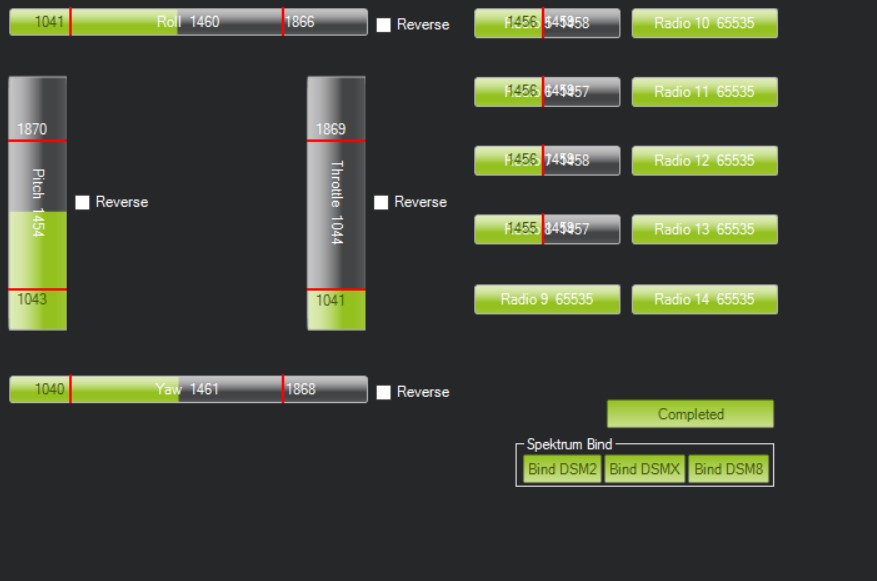 And one weird thing is that even though it is a 8 Channel Receiver but when I toggle the switches it back and forth it doesn’t register those values, but sometimes channel 5 works , i don’t know what it is.