Base and rover connection with radios does not work

I have 2 reach, Base and rover connection over wifi work fine. Now i need to go the next step and connect them over a 3dr modem.

I have 2 modems: one serial version and one usb version. They came in that configuration. 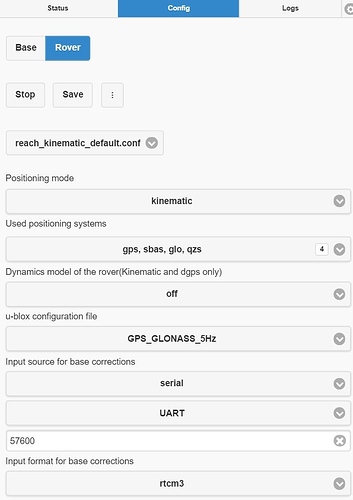 Problem 2:
The base is not accessable in wifi if the usb modem is connected turing the boot.

Question:
is the booting problem known? what should I do?

Could you check if the radios work by connecting them to your computer and opening the COM/serial ports?
In general, settings the same baud rate on both sides should be enough.

What do you mean by rover showing no connection? The configuration seems fine.

Could you be more elaborate on the USB issue? How do you connect the USB radio to the base Reach?

My experience is with the RFD900 radios, not the 3dr, but I believe they use the same commands, so I will answer as if they are RFD900 units.

In addition, the NETID (network ID) must be the same number on both units

There are 2 speeds which are set independently:

Yes, you should check the serial speeds are the same as Reach (57600) and if you plug the radios to your computer for testing, make sure your computer’s USB/serial port settings are set to the same speed.

Problem 2:The base is not accessable in wifi if the usb modem is connected turing the boot.

Another thing I did was read the RFD900 documentation and get familiar with the modem AT commands. Then I hooked both modems to my computer and made them communicate and pass keystrokes back and forth. Then I connected them to Reach and tested with keystrokes. What I mean is typing in one radio and watching the characters appear from the other one. When you prove to yourself that the radios are working then start up ReachView and everything should be OK.

base:
radio is connected to usb (115kboud). If I start the base than the red led is blinking on the modem connected via usb to the base AND the red LED on the other radio is also blinking!!!

thank you and best regards
Franz

thats strange!
it seams that the data from the base gets over the air to the rover modem (booth red leds are blinking) but the data does not reach the rover.

I have swapped rx and tx and tried booth. no success…

here is a fot of my test setup of the rover: 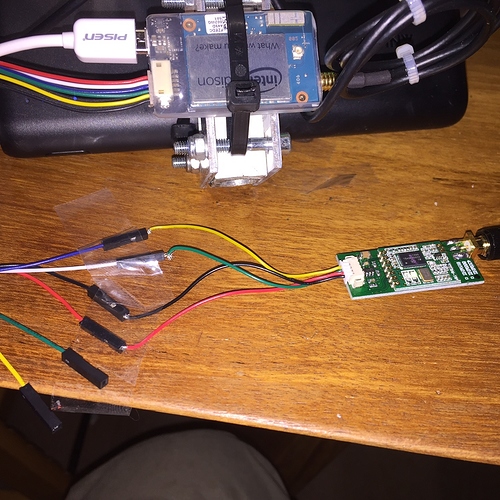 here is my config screen of the rover: 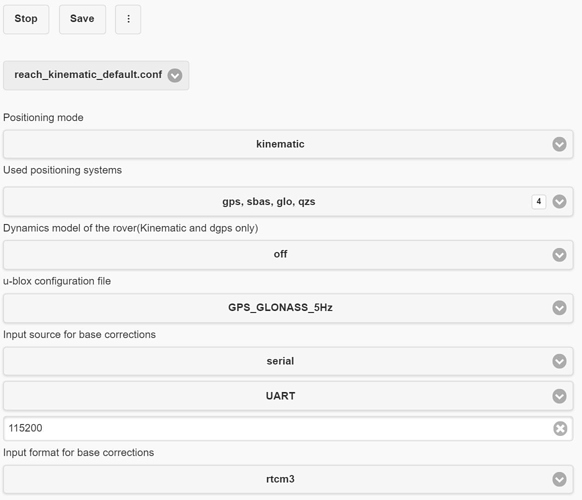 That’s good that you can see the red LEDs blinking.

If your serial or USB speeds are set incorrectly, the red LEDs can still blink. The data that is being sent will be corrupt and the rover will not be able to use it. So please confirm that your 3dr radio serial speed matches your speed in ReachView.

I think I have exactly the same issue. As far as I can see I can’t see any problem/error with my setup, but the reach units don’t communicate via radio.

The first radio LED are both solid green. The second red LED seems to show the transition of data… 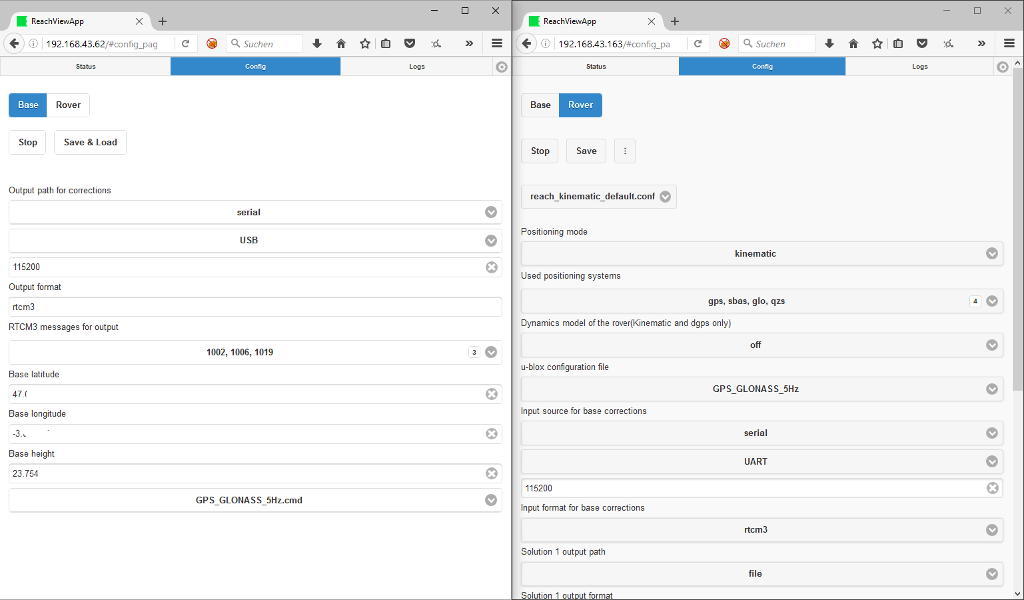 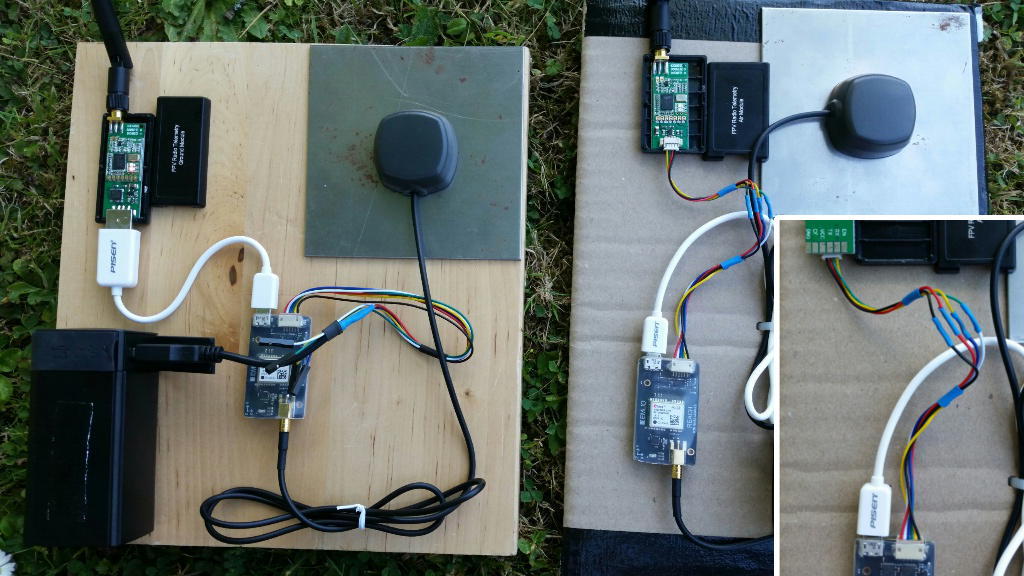 try to switch to bautrate 57600
at every unit
and

I have solved the problem!

Problem: i do not know how to set the baute rate, there is no info if it is correct or not, it is a try and error thing… and you have to us an external sw to change the bautrate…

Solution: i bought another set of 3dr v2 radios with a usb at each unit!
It works straight out of the box.

I insist that emlid changes the docu so that the 3dr v2 is the favorit solution.

@Andreas_Ortner thx for the hint again, though I read it aleady seravle time I didn’t try it until now.

That was exactly the problem, as well I had to set the bautrate to 57600 on both units as I had to switch the TX and RX wires, though I had connected them before as described in the docu. 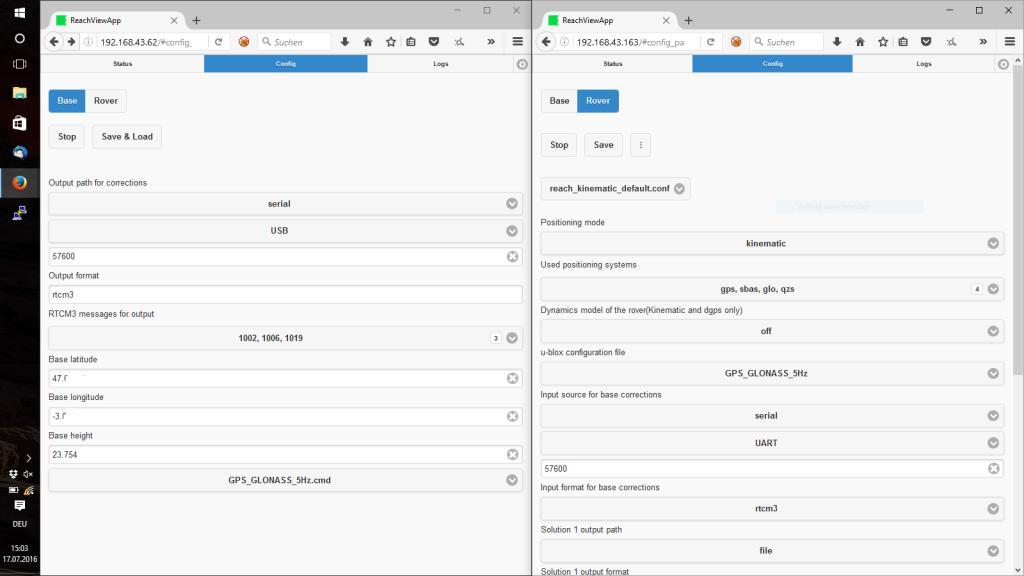 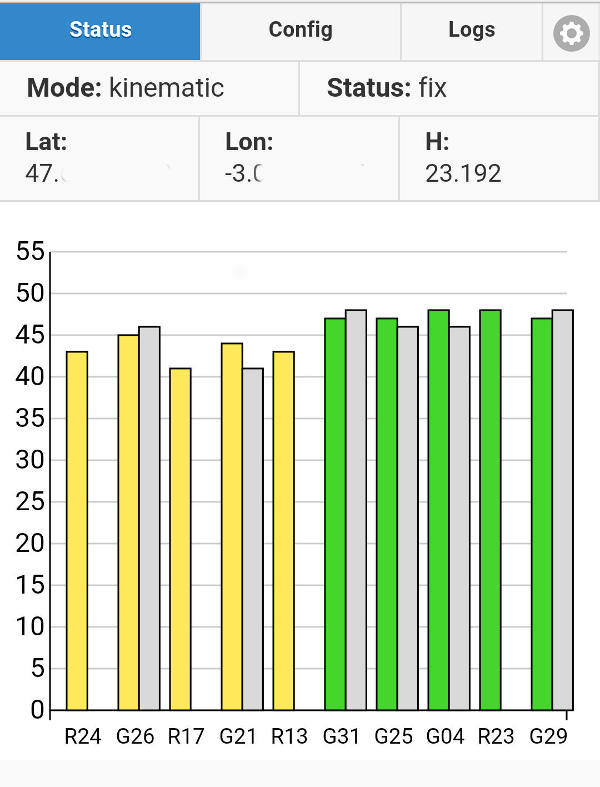 @Franz_Helmli I was about to buy another radio system, but I’m happy know that it works with this “cheap” units.

I have used many 3dr v2 radios and I know they can work quite well.

After a few days of use they often fail. The radios are very cheap and are very sensitive to damage from not having an antenna connected.

I don’t get the USB option under serial in he base station. I only get UART odd.

I have the same issue, i can only see UART. I am running the latest version of reachView (0.4.6). Is USB a feature that has been removed? I am running MAC OSX, but also have Windows on Parallels.

@Multirotorcraft, I still only see UART, but found another way to do this: https://docs.emlid.com/reach/software-development/#using-ethernet-over-usb
It seems that intel Edison creates a virtual Ethernet port through USB, and you can use this to obtain the corrections. Follow the instructions in the link above and make sure that:

For me it worked great.

There’s an issue with radios over USB. We are working on it. Confirmed. Seems like there has been an update of the ftdi driver package and it does not correspond properly to the kernel version. We will see what we can do about it and thanks for bringing up this issue.