I recently updated to Ubuntu 16.04 and I can’t seem to flash anymore - the GUI doesn’t install because it says it only supports up to 15.04, and the CLI doesn’t work as when I run ./flashall.sh, I get :

I am using Emlid Reach and the firmware is 0.0.3. I have used both images, but they both give the same error.

Try running it as root

Hm, still doesn’t work. I get this error on the GUI, 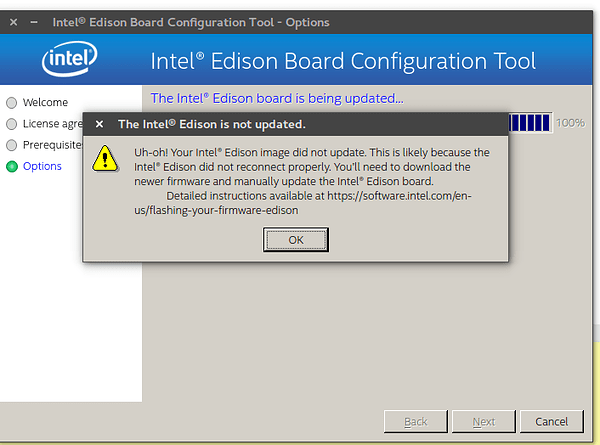 I did update the firmware to 0.4.9 though, and was able to boot into windows and then reflash it, but hopefully 16.04 wil be supported soon.

It is not a matter of supporting an exact version of ubuntu. We’ve encountered this problem before, but usually it’s a matter of chance, with flashing software missing the moment Reach boots.

Please, describe the exact steps you perform while flashing the the flashall.sh script.

Also, you can try to flash our beta.

So I downloaded the edison-image-edison from from https://files.emlid.com/images/ReachImage_v1.2.zip, and then I downloaded the tool from https://software.intel.com/en-us/iot/hardware/edison/downloads to flash with, downloading the linux version. I’ve plugged in the REACH, and my computer is able to find it and connect to it. Then I just run the ./flashall.sh script, where I choose the ‘use sudo’ option.

I click ‘next’ anyway, and then it is able to find the device and connnect to wifi successfully (I had previously set up the Reach already). 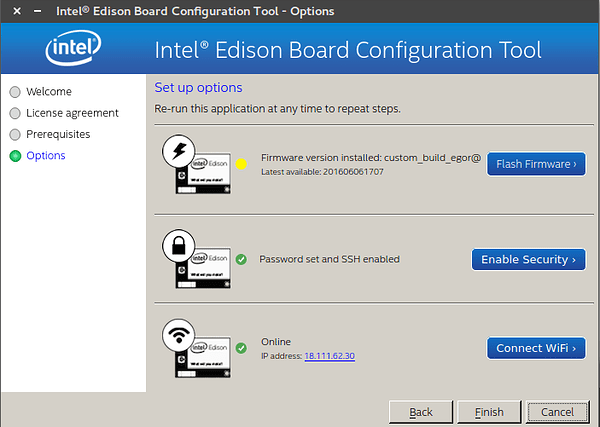 Then if I try and reflash it, it will disconnect, and then it will give the error I wrote above and say “device not located” (whereas previously it had found the device, as mentioned). If I unplug it and replug it, it will find it again but it will not have been flashed.

Same issue even with the beta image, too. I have managed to flash both image versions with the Windows/Mac programs and also Ubuntu 14.04, just not 16.04. It’s possible my 16.04 machine is missing some dependencies, (but sadly my only laptop is a 16.04 and I have to try make that work…)

You can try using the flashall.sh script which is inside the image archive instead of the GUI tool. It should work without those ubuntu version warnings.

ah, it works! Thanks. Originally it was not working because one of my directories had a space in its name and the script kept saying there was a syntax error when I tried to run it.

Successfully updated in Archlinux from 1.2 to 2.2.7.
Just need to install dfu-util with :
pacman -S dfu-util

If you are on ubuntu, just run :
apt install dfu-util
apt-get is not necessary at this time

I am on ubuntu, thank you that worked.