What's the point of the "kinematic" RTK setting?

I’ve been testing RTK surveys where the base is located over a known point and I survey different locations around the base. I ran into an issue where the rover coordinates would remain blank, that is, no coordinates would show up at all, but I could see corrections being sent from the base. After some troubleshooting, I discovered that setting the RTK setting on the rover from kinematic to static solved the problem. Since the rover setting is supposed to be kinematic, I changed it back from static to kinematic and it still worked. I’m glad I fixed this weird problem, but it brought up my question: What’s the point of the kinematic Positioning mode setting? There doesn’t seem to be a practical difference between the two.

The Emlid website says " Kinematic - most used positioning mode, assumes that the receiver is moving". Is that moving as in on a moving vehicle or in the rover moves around from point to point but measurements are taken when the rover is NOT moving?

Contrary to the Emlid Youtube video about RTK surveys, it appears it should actually be set to static on the rover in most cases (unless mounted to a UAV or so, which is unlikely with an RS2), no?

If you are locating GCP’s, property corners or anything else it should be set to static. If you are locating a trail, road, railroad tracks in a moving vehicle or even walking, it should be set to kinematic. Kinematic is mainly used by the M+ and M2 in drones for photogrammetry due to their size (match book size) and light weight. Some may use RTK (real time kinematic) in photo work with drones but PPK (post processed kinematic) is more precise as the actual raw data of the flight line is collected. Michael Lambert on this forum is very knowledgeable in this area. He has helped a lot of uses here in this subject as well as Emlid and others.

OK, that makes sense, though the actual technical/methodological differences between the two modes are not clear to me (that is, what does static do that kinematic doesn’t and vice versa). Thanks!

I can’t explain any simpler than above other than this:

In land surveying, static observations are performed occupying a point while the receiver is stationary for a set length of time depending on the needed accuracy. Once the length of observation time has been completed, the position is stored and the next point is occupied.

Kinematic surveying is performed when the receiver is in motion, i. e. a boat, car, plane, drone, etc. and measurements are performed while it’s in motion.

RTK (real time kinematic) can reference both methodologies as positions are computed instantaneous at the rover as transmitted from the computed base position via uhf (LoRa) radio or by internet. 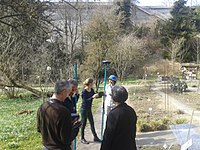 Real-time kinematic (RTK) positioning is a satellite navigation technique used to enhance the precision of position data derived from satellite-based positioning systems (global navigation satellite systems, GNSS) such as GPS, GLONASS, Galileo, NavIC and BeiDou. It uses measurements of the phase of the signal's carrier wave in addition to the information content of the signal and relies on a single reference station or interpolated virtual station to provide real-time corrections, providing up to...

Thanks, Bryan. I am clear on the practical side of it, I was just wondering what the nitty gritty details are of the inner working of the units for the two settings, that is, what makes the static mode good for static positions and what makes the kinematic mode good for moving surveys. But it’s also not that important at this point. Appreciate your help!

I’ve got two M2’s for static. I use a Javad Victor LS system accessing the SC RTN. I bought the M2’s mainly if I lose cell service. I usually set up the M2’s approx 200-300 meters apart as a baseline. If I lose cell service, I can locate the point by static observation using the Javad and PP with the two M2’s static data. I also have a closed loop to verify the located point’s accuracy. Most of the static baseline lengths are usually <300 meters.