What GCS for Linux

I use Linux wherever possible and it was a bit disappointing to find that the “Best” GCS was windows based - Mission Planner.

APM Planner 2 simply doesn’t have all of the options that MP does - the one which came to the forefront recently was the ability to set the LOG_DISARMED parameter.

I tried to get MP running on Wine but it is very unstable. So it was good to find that QGroundControl which supports Linux has developed significantly from when I first looked at it a couple of years ago. In my opinion it is very slick.

The moral of the story - if you are using Linux then this is definitely the GCS to use and if you are using Windows have a look at it as well - the more suport they get the better it will be.

We also use QGC as much as it’s possible. It’s indeed slick.
The guys did do a really nice job redesigning it. The MP has a couple of features that lack in GCS but we hope it’ll have been a thing of a thing of a past at some time in the future. We expect GCS being on a par with MP in no time.

But according to this page, “support for APM Flight Stack in QGroundControl is currently in Beta”.

Why don’t you use/recommend APM Planner instead? It has version for Linux and you can set the “LOG_DISARMED” parameter using LOG_BITMASK. 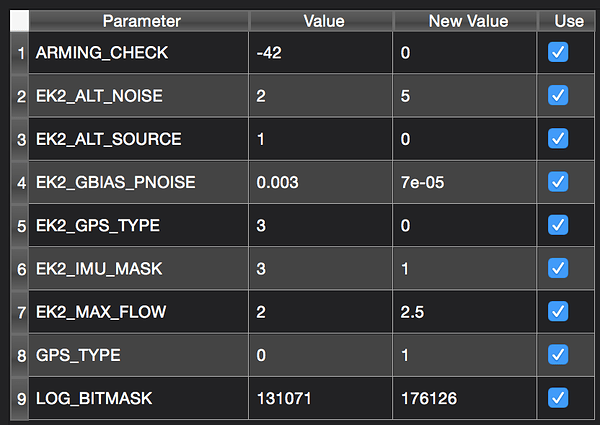 APM Planner is missing functionality. The Standard Parameters and Advanced Parameters forms are completely blank and the “Full Parameter” list is even missing some options - for example the option to log in unarmed state.

I know that QGC is still beta but as I said in my post it has come a long way from where it was when I last looked and it is actively being worked on. I am using both at this point in time and I prefer the feel of QGC. Look at the compass calibration functionality for example. It leaves no room for user error.

It might be an issue on Linux or with your system. I can perfectly see all the Standard Parameters and Advanced Parameters.

what version are you using?