I have set up a rover and a base with the beta version 2.1.6r

I am not sure if this is a version issue, or if it is a fault, but would like to report this as my issue in a hope that someone can help me.

I have a requirement to use the USB-PC function to output NMEA strings for my application.

First Question
Once the rover is set up and running, I notice that on the status screen, that it is displaying lots of satellites, but there is no result in the “Position” area and no other data displayed. I will add that every now and then, the “Position” section is populated for a second or 2 but then it returns to a blank result again.

Why is this happening?

These are the settings 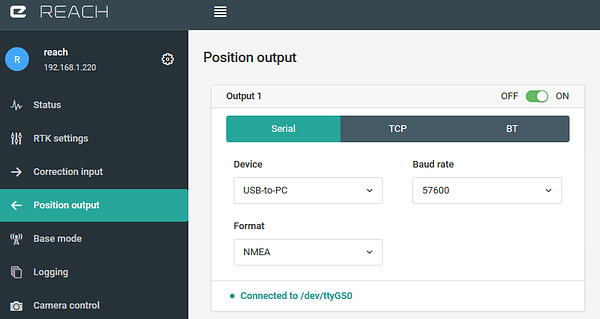 For my application, I need a constant output of the NMEA string no matter what the resolution. (single, float or fix) As long as there are enough satellites, I need the output from the reachGPS.

Can someone please help me with some suggestions on how I can achieve this?

You are not alone with that.
Your signals are poor, are you indoor? Once these bars rise a bit more, you will see info updates in those missing areas.

The Antenna is outside and now I have placed another single GPS tracker I had lying about at the same location. It only has GPS. It gives me the NMEA output all the time continuously, showing Sats = 5. It obtained the signal within seconds of booting it.

So why if it can use those 5 to give me an output then why cant the Reach?

It has to be settings…

Your mode should be set to properly according to base. Use static or kinematic mode on rover. Yours is set to singel
Are you using a proper groundplate under reach units? both unit?
You will have to gain certain amount of signal for reach to output some value of use, how much i am not sure.

Are you using a proper groundplate under reach units? both unit?

that is what I was thinking, but you beat me to it.

also, Reach is intended for accurate RTK when provided with good signal, not for working with poor signal like handheld GPS or GPS tracker are suited for.

In other words, if you say Reach is no good for use with poor signal, then you must also say GPS tracker is no good at RTK for centimeter accuracy. They really shouldn’t be compared in that way.

Like @TB_RTK says, once you get your signal to noise ratio increased, then you will get the results that you are looking for.

The SN was low due no ground plane…

Now I have this sorted, I have FIX on the rover now using static setting.

My question is still valid regarding the output string. I notice as it changes mode, the NMEA output to my PC is a bit hit and miss with constant drop outs and lengthy times with no output at all. I was wanting to see the output constant with only the mode changing on the NMEA GGA sting.

I think that Reach, when displaying “Status: -” does not make any output. If status is single or float or fixed, then you will be getting output.

If that is what you observe also, then you should concentrate on your signal quality now that you have enough signal strength. I mean, how is the sky view? Are there obstructions? Reflective ones, such as buildings near by? Does the “-” status appear when you are in an open field?

Also, try with only GPS satellites and see if there is a difference.

Also, the Inertial Measurement Unit (IMU) is not currently working with Reach, and I don’t believe it has the concept of “momentum.” Handheld GPS or GPS tracker may have a concept of momentum or an IMU so that it can provide estimated coordinates in the case it looses signal for short times.

You must think, “do I want NMEA strings to be output that are estimated, or the last known coordinate to be repeated until a new one is found, or should it not output any NMEA string unless it is based on a real coordinate?” What is best for your application?

Thanks for the information. It seems I did not have a good ground plane for the antennas, so once this has been rectified it is now working a treat.
Yes you are correct in saying that only single, float and fix allow output to the pc via usb-pc output setting.