I am working on using Xbee Pro S1 radios to send base corrections via UART. However, the rover remains at single all the time (implying that the base corrections aren’t being taken into account).

After some troubleshooting, I learned that the Xbees are correctly sending and receiving data. The corrections are set to be in RTCM3 format, and I looked at the raw data received by the Xbess, and they are a stream of numbers between 80 and 255.

So it seems like everything on the Xbee side is correct (including Rx/Tx configuration and setup with the GPS) and everything. But the GPS just never seems to receive the correction data. 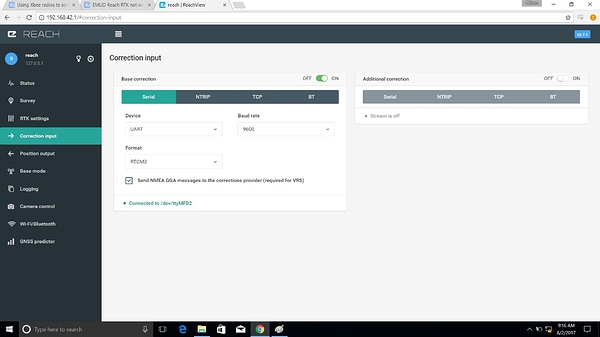 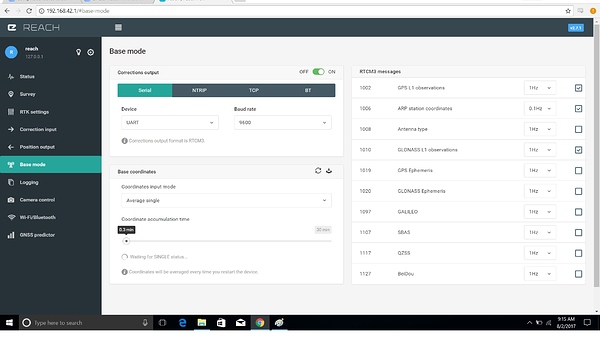 There should be a clickable stream with incoming RTCM3 data? I don’t think I’ve ever seen that before, even with TCP (which I’ve gotten to work just fine).

Right about here. You may also turn off VRS. ( Its for virtual refrence base) 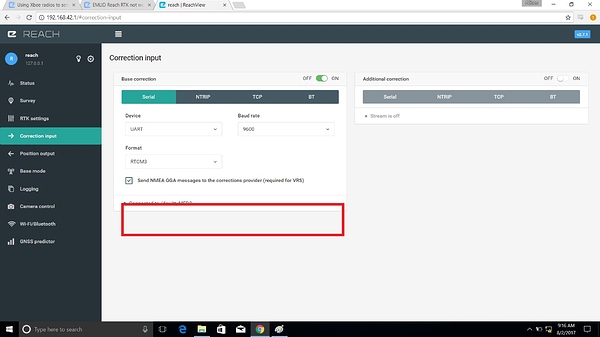 Ah, well I’m not getting that, which I guess means that I’m not receiving the correct base corrections.

My radios are working, and I can tell that the base radio is transmitting and the rover radio is receiving. I can also tell that the rover GPS is receiving something. However it must not be a correct RTCM3 message. The baud rates and parity bits are all compatible. Is there any other factor that might cause this error?

Barely. I would recommend testing the XBee connection on two Reaches first. Instead of using ReachView, try to ssh into both of them and use the UART directly from terminal to make sure the radios are working as expected. The DF-13 UART connected is called /dev/ttyMFD2 in the system. You can use screen /dev/ttyMFD2 115200(or any other baud rate) on both sides.

It looks like the Xbees are receiving something slightly different than the GPS is outputting. The GPS is transmitting a steady stream of numbers and the receiving Xbee is receiving a similar dataset with large gaps in the data. It looks like maybe the Xbee is dropping some of the original data? Changing the frequency of the RTCM3 corrections in Reachview seems to change the amount of data that is dropped but I have yet to see a seemingly unaltered set of data. Any ideas?

What is the expected bps throughput on your setup? It looks like this, indeed. You might need to limit the rtcm3 messages severely.