Hi there,
I currently play a little bit with the Tarot 650 Sport Quad frame.
I want to get a copter which will run at 6S.
However the electronic should work with 8S-10S (if I plan an update in the future).

So this is the cable chaos inside: 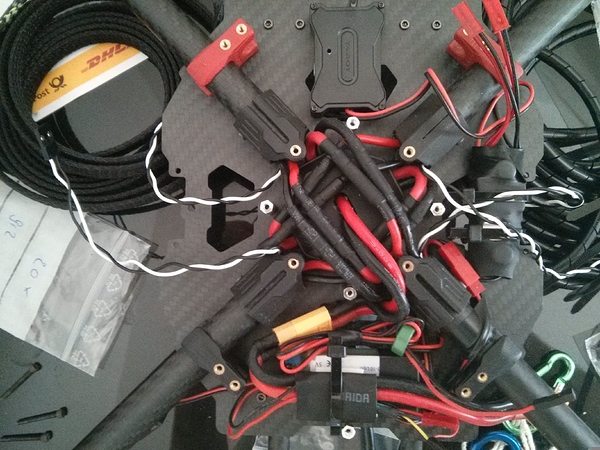 I soldered a custom power supply for the Navio with a HV UBEC and a 180A voltage monitor (AttoPilot).
Works at the end like the normal power module, just a little bit bigger. 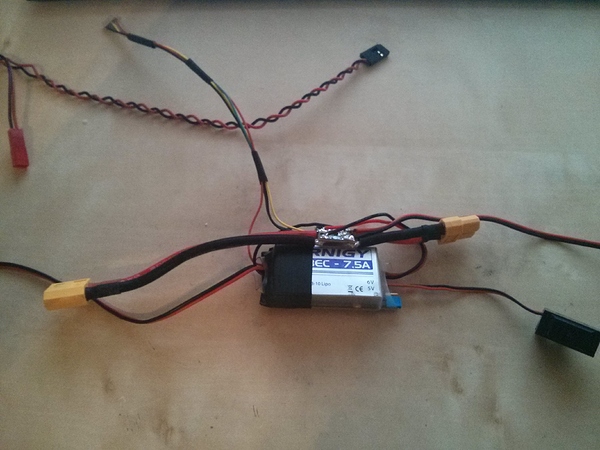 Unfortunately, I put the ESCs under the motor. They have some LEDs for direction estimation.
I like this, because I save some weight for cables. However, the magnetic field could become problematic.
I drilled the cables inside of the arms to compensate this a little bit. Let’s see how mad the compass will become. 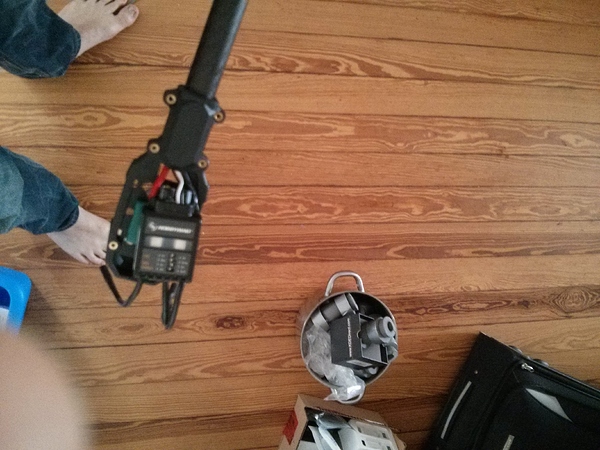 The arms are elongated. The final diagonal is now 860 mm. I could mount 18" props. 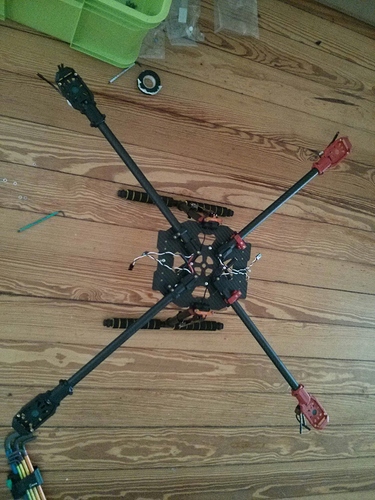 On the top I will connect a 5V USB hub. The hub will be connected to an Alfa 30 db Wifi dongle and maybe a 3G modem. Photos will follow…

This is the top. The Navio/RPi sits on a platform, which is mounted to the frame via self made foam/silicon pillars. 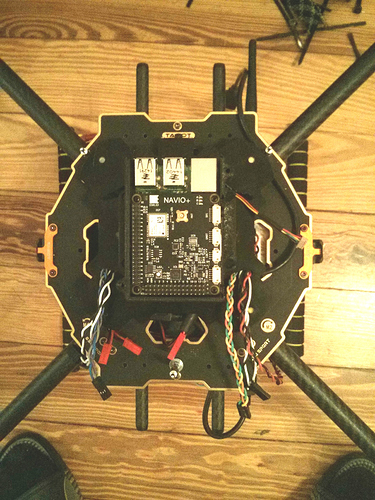 Under the platform with the Navio/Rpi there is this USB hub. 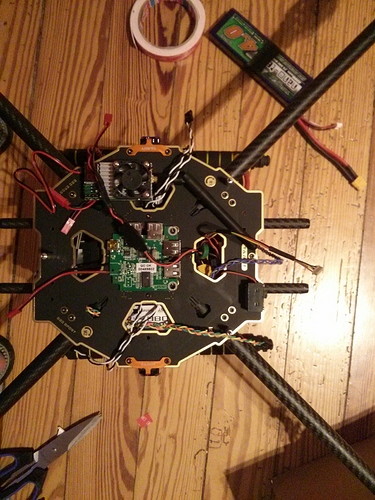 On the bottom I have a 5.8 Ghz Radio and a Wifi dongle connected to the USB hub. 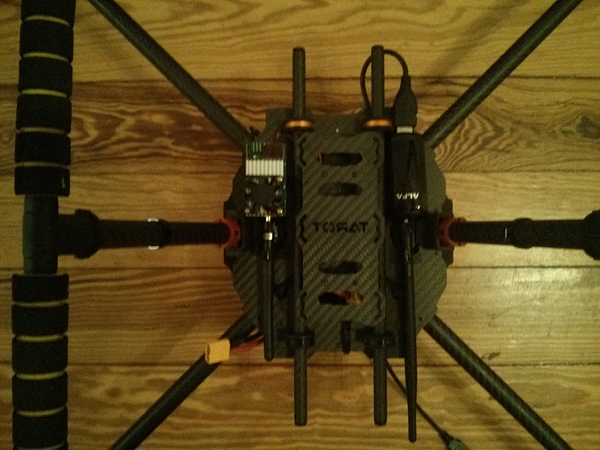 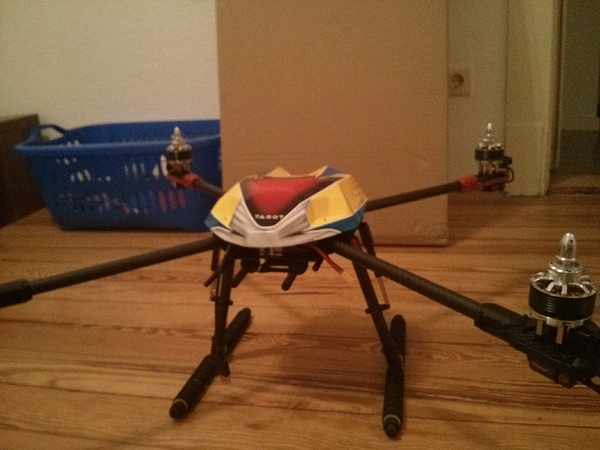 So far I am not sure where to mount the GPS

I noticed that my initial shock/vibration adsorption was not ideal.
So I used two vibration damping boards and mounted them on top of my first layer (fixed with gel pads).
The first layer is necessary to mount the USB hub appropriately. 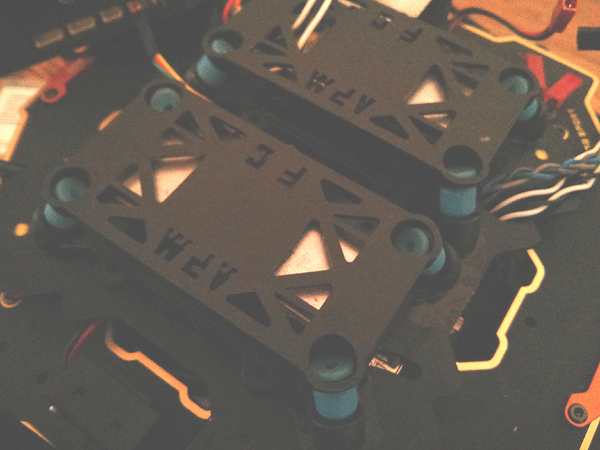 Unfortunately the shock dampening board don’t work very well, if the mass on them is low.
This is why I glued additional lead under them. More lead I put under the case of the RPi which is not on the picture. 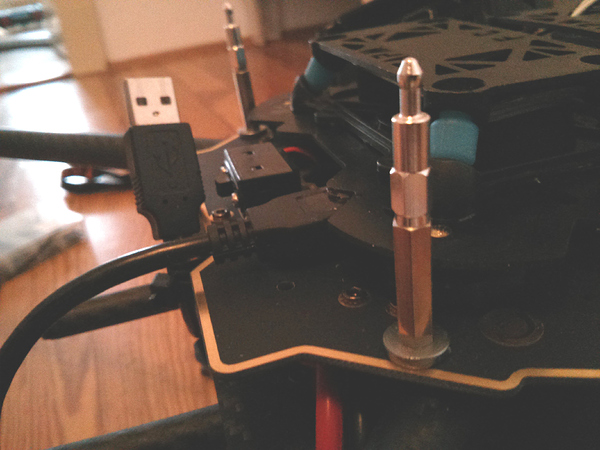 The RPi/Navio combi is so big that it will sit on both damping platforms. With the lead weights, the vibrations from the KDE motors can be reduced roughly by the factor of 4 or 5 (tested without props).
I guess, with propellers the effect will be stronger.

you can fit it on one ap mount, you just need to whip up a little adapter plate; this is how I did mine. My vibes are non existent 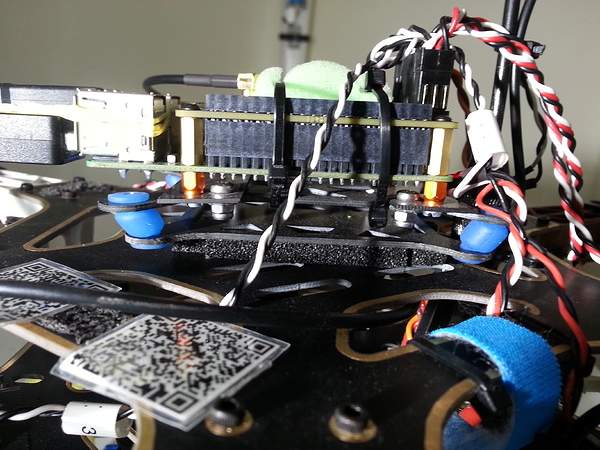 Small update, for anyone interested to mount motors on vibration dampeners.
Just don’t do with bigger props. The inertia seems enough to bend even stiff dampeners.
Tried 18" wood propellers and one propeller was just cutting through my battery monitor which was mounted 2" under the path of the propeller.
This means the weight needed for deformation of the four dampenersto overcome the 5" was greater then the lifting force (much bigger), which lifts the copter. Guess > 10 - 15 kg. Wonder how it was possible.

Yes motor vibe dampeners are tricky, I have had success on 15 in props