In brief, here’s the google earth overlay. Ignore the image’s marked field lines, which are obviously wonky (and 3 years ago), and that google imagery isn’t always located very well (although the permanent 0m and 100m lines, and shotput waypoints seem perfect…). The important point is that I marked the points at the intersections of the field lines, which are where I turned and walked across the field, yet it appears all my waypoints are about 1.5m south of these intersections. It also appears the waypoints don’t line up with where I stood for a minute collecting the points. 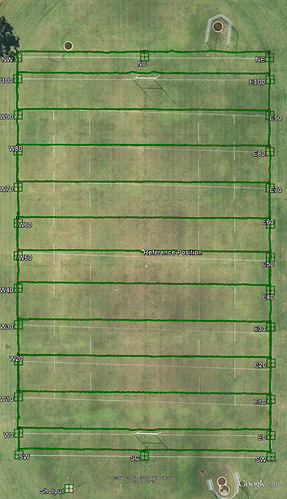 In detail:
I walked an RTK survey today of a local sports field. I created a survey and marked points along the boundary lines, at their intersecting meter lines. I had fix the entire time, using all satellites other than Glonass (30 satellites!

), and a local reach radio base station in the centre of the field that I located using 10 minutes of fix from a NTRIP station 65km south. The survey points were taken during the same time period as I walked the perimeter of the field, then I walked the horizontal tracks of the lines (in the same log file)

At first I assumed the icons weren’t indicating the actual position, however the waypoint latitude and longitude don’t line up with the mouse-over lat,lon of the intersections either. I then assumed maybe it was a projection error, but everything is set to WGS84/EPSG:4326. I don’t think I’ve done anything silly like including an offset during kml generation, etc.

I cut the first few minutes of the rover log in my kml to remove walking to the start position and setting up.

Also, I noticed the single solution plot is pretty good, just thought I’d show it off. I postprocessed the same log without base corrections: Blue is dgps, red is single. 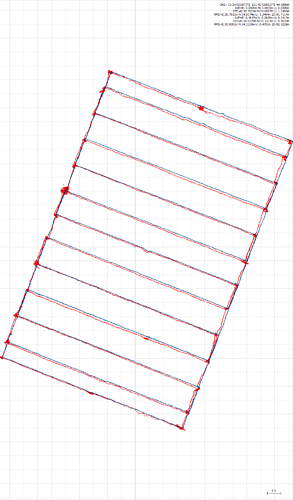 So TL:DR is, does anyone know why survey points don’t line up with logged tracks? Should I trust the survey points, or the track? Can I better process the logs to fit the surveyed points better in the future?

Thanks for your time.

Just a quick question. Did you use fix&hold?

The best guess is that you didn’t set the base coordinate for post processing for the same value as during RTK work.

Ah, you’re correct. Well spotted! I grabbed the co-ordinates I used on my base reach during surveying and re-processed the rover log with those co-ordinates and it’s perfect.

Thanks to you both for your help.

Why are these numbers different?

hello dude, how much time takes to come in fix mode? can u say me

It really depends on your conditions. I had pretty perfect satellites with all constellations other than glonass enabled, for a total of 30 satellites in view. My reach base station was on static mode with a ntrip correction 65km away, and after a hot start I would say within several minutes on average. Some times it takes 10 minutes, other times it takes 1. I think most recently my base station didn’t get fix for 10 minutes, but once I started my rover it got and held fix within 2 minutes. There should be plenty of discussion around these forums on other users typical experience getting fix, how they set up their equipment, and their personal anecdotes.