Sudden fall of the drone

Hi,
have also experienced sudden fall of drone. I’m running a hexacopter on RPi3. On latest Navio & Arducopter firmware.(Including class 10 micro SD card). Also reluctant to try again as every time substantial damage occurs. (Not funny with a $2000.- drone).
The data log is corrupt and hence doesn’t provide any helpful answers. My suspicion is the WiFi tried to connect to my router yet poor signal caused multiple disconnect from router. But didn’t want to use ground-station on that particular flight anyway. Benn using 4G USB modem in the past and that seems to prevent the sudden crashes.
–> Update: Decided to test drone further…just done some short flights. 1st. flight as expected. Subsequent attempts to fly resulted in very delayed response and unusual motor adjustments prior to being airborne. (no WiFi or 4G in order to prevent possible other causes). Logs show multiple entries indicating “Land complete maybe”. Did not actually fully take off on subsequent flights due to unusual response. -Unable to attach logs as I’m a new member.-

You can upload logs to any file transfer service and share the link here.

May I also ask you to post your hardware setup photos? 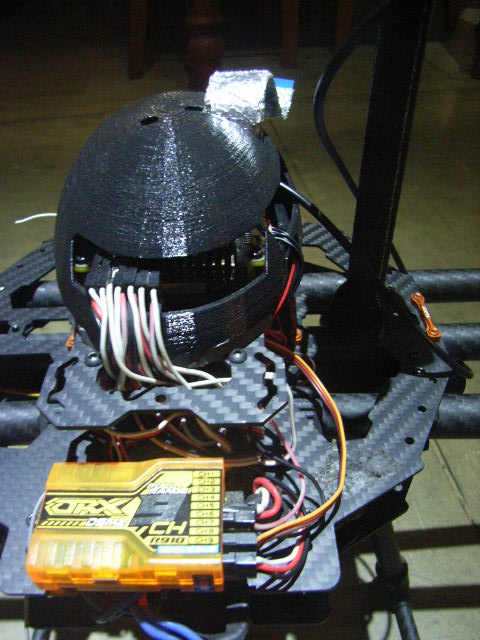 Thanks for the data, we’ve checked them.

First of all, I noticed that you’re using the antenna without a ground plane which is not recommended. I’d advise you to locate the antenna on a metal plate.

One of the logs you shared is empty. I’m afraid we haven’t noticed any obvious issue in the other 2, however, we have some assumptions on what may be wrong.

It’s more likely that there is a noise from the electronics you use onboard. Could you please list all the hardware you installed on it?

Hi Tatiana,
which antenna? RC receiver, RC satellite Receiver, GPS Antenna?
…It’s the first time I’ve heard using metal underneath. But am fully aware of possible interference hence: a) GPS Antenna mounted higher then rest of equipment. b) I’m aware the RPi-Camera can create interference and hence cable is wrapped in aluminum foil and camera casing is also lined with foil.
As to hardware: RPi3+ Navio2, RC-controlled landing gear, 6x20A Turningy ESC, 6x 1000kv outrunner brushless motors, 1 RPi Camera, 1 Mini Servo (adjusts tilt of camera) connected directly to receiver, not to Navio.
At times I have used a 4G USB Wireless Broadband device - But wasn’t in use when crash occured and not during last few test flights. Also camera is currently (since crash) disconnected as you can see in one of the photos.

–> The latest: Have attached metal plate under GPS antenna and also under RPi+Navio2 combination.
Carried out more test flights like before. 1st. flight as expected. (Climbed to about 3m and switched to Loiter, then turned 360 degree and watched for any sudden movement / changes). All OK.
2nd. flight: Attempted same as before. However, when height of about 3m was reached switched to Loiter (throttle control stick roughly in middle) within seconds drone suddenly climbed straight up. Had to switch back to stabilize and land drone.
Yet when trying to retrieve log not a single log from today was found. Despite having setup log config that every flight is recorded and saved when disarmed.

Sorry for not clarifying this, I meant GPS Antenna. It’s needed to reduce multipath effects.

Yet when trying to retrieve log not a single log from today was found. Despite having setup log config that every flight is recorded and saved when disarmed.

That’s not a normal situation. I guess there might be an issue with the SD card. Can I ask you to test the setup with another SD card to eliminate its possible damage?

Have already installed metal under GPS antenna and under control unit. - Yet no difference.
As to SD card: After yet another test flight found log file has been saved again. It was a new SD card (class 10) when installed late last year.

…more test-flights and more data.
Spend hours looking over data trying to find cause. Latest observation: Take off and fly up to 3m above ground. - Switch to Loiter followed by a slow 360 degree turn. …all good. Land gently whilst in Loiter. Turn motors off. Switch to stabilize --> Motors suddenly start running (idle speed). This happened on two subsequent tests. Yet nothing about this in the logs.
Also followed official Ardupilot diagnostic procedure
https://ardupilot.org/copter/docs/common-diagnosing-problems-using-logs.html
a) Mechanical failures - All OK
b) Vibrations - All OK - In fact well below recommended max. values
c) Compass Interference - All OK - Well below the 30% value mentioned
d) GPS Glitches - All OK no problem found
e) Power problems - All OK only 0.04V change in board voltage --> Well below the mentioned 0.15V
f) Unexpected errors - All OK as none found

Could you please kindly explain what the "It’s more likely that there is a noise from the electronics you use onboard." refers to you mentioned earlier ? - RF interference or Interference via connected wires or magnetic interference ?

–> Food for thought: I did use same drone with same hardware using my old APM2.5 controller. - Yet it never just dropped out of the sky. Yet with Navio2 + Rpi3 I suddenly have this problem (and other odd things as just mentioned above).
However, when I’ve first installed this new controller combo I’ve used Raspian Stretch and Arducopter 3.6.5. So, given the issues encountered started after upgrading to Buster and Arducopter 3.6.11 could it be the Raspian Buster causing this or the Arducopter 3.6.11. ?

–> Is this the issue??
https://www.aviation.govt.nz/about-us/media-releases/show/Aviation-safety-concern-with-Arducopter-Pre-3.6.11-firmware

As to SD card: After yet another test flight found log file has been saved again.

Does it occur with other flight modes?

Could you please kindly explain what the " It’s more likely that there is a noise from the electronics you use onboard." refers to you mentioned earlier ? - RF interference or Interference via connected wires or magnetic interference ?

I’ve noticed the RPi camera on the photo and thought it may create RF interference. You said you covered it with a foil, however, may I ask you to disconnect it completely to check if it helps? Just to make sure it’s not the reason.

It hardly can affect Navio2 as it’s related to STM32 flight controllers only.

But I haven’t done any more testing as the status light of the Navio2 is no longer operating.

But ground station confirmed all OK hence able to fly.

In regards to log: I could sent the last log from 3.6.11 but given that I’ve now upgraded this may not be of any use.
In regards to flight modes: I only use Loiter, Stabilize, RTL and Auto flight modes. So given that I had the drone dropping 3 times without any apparent reason and causing damage each time I am not willing to try other flight modes and yet risking more damage. Besides, now that I’ve upgraded have to test this version more extensively rather than wasting time on older version.
Camera: As seen on second photo (somehow there was only a link for it and not the actual photo) the camera has been disconnected since last crash occurred a month ago. (This was also mentioned in earlier post) .
Only the cable itself is still connected to RPi.

But I haven’t done any more testing as the status light of the Navio2 is no longer operating.

There is a bug somewhere. All is fine but light stay “off”.

Thanks Marc,
thought it might be just a minor thing as everything else appears to be OK.

Have now also successfully tested all flight modes I use: Loiter,Stabilize, RTL, Auto including take-off and landing.
Besides the before mentioned issue with the status LED the only other thing I’ve noticed is the drone appears to be a little more “twitchy” ,…not as smooth as previously. But I suspect during the upgrade one of the settings changed back to default. (Yes, also have re-calibrated sensors).
Will check settings in detail when I get around to it.
Happy flying !

Good to hear that everything works fine on the ArduCopter 4.3.0. We’ll look into the possibility to update our ArduPilot to the latest available version which should also fix the issue with LED indication.

Besides the before mentioned issue with the status LED the only other thing I’ve noticed is the drone appears to be a little more “twitchy” ,…not as smooth as previously. But I suspect during the upgrade one of the settings changed back to default. (Yes, also have re-calibrated sensors).

I’d recommend resetting all the settings to default and recalibrating them from scratch. Also, the PIDs recalibration should help here.

Thanks Tatiana,
will wait until you have a new version and then reset & tune all settings. Or else have to do it now and then repeat the whole process when an update becomes available from you.
If all successful will stick to one version and not change for a long time as I got caught out a few times over the years with unstable releases.

We’ve just fixed the issue with LED indication for new versions of ArduPilot binaries. Now builts from the source don’t contain this bug.

However, we’re still working on the updated Navio2 image. I’ll inform you once it’s out.