Studying Proglacial Lakes in the Himalayas with Reach RS+

The proglacial lakes are great natural phenomena that attract the attention of researchers. Proglacial lakes are formed by either a retreating melting glacier or by meltwater that is blocked by a glacier. Up in the Himalayas, there are quite a few proglacial lakes. They are being monitored together with the glaciers themselves.

A group of researchers held an expedition up to Thulagi, Lower Barun and Imja proglacial lakes to investigate how the glaciers’ calving can affect the state of the environment. And Reach receivers helped them on this scientific journey—by collecting GCPs on-site for future research.

Why Is Proglacial Lake Monitoring Important?

Glacier calving is the process of separation of significant pieces of the glacier. Calving strongly affects the mass of ice, reducing it, and glaciers that are connected to larger lakes shrink faster.

Monitoring of the proglacial lake and glaciers nearby is, first of all, a question of safety. The process of calving and increasing the mass of lakes is dangerous. It can lead to a glacial lake outburst flood (GLOF). GLOF occurs when the dam cannot withstand the onslaught. This happens for many reasons, including snow and ice avalanches into the water.

Global warming and climate change are among the reasons for the increasing hazard of GLOF. With the ice melting, the lakes’ volume increases, which presents challenges but also new opportunities such as hydropower generation. 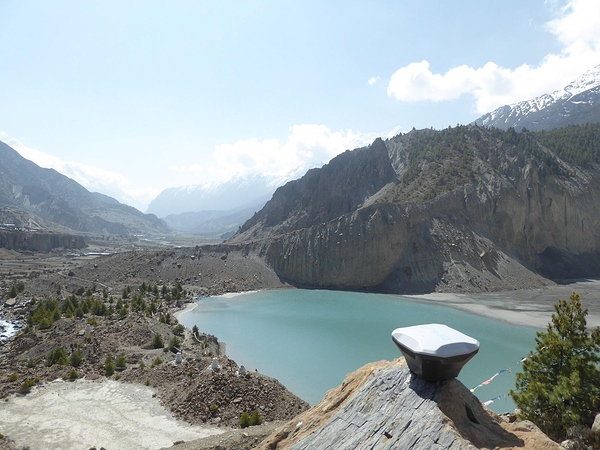 The researchers decided to look closer at the potential effect the calving might have on the proglacial lakes. This study aimed to analyze the glaciers after numerous calving events in 2017 and forecast possible changes in the lake and glacier dynamics under calving conditions and thermal conditions of the lake. To do this, the team studied the Thulagi lake and compared the results with Lower Barun and Imja lakes.

The main issue with monitoring and studying the lakes is the inaccessibility of the sites. The lakes are situated quite high in the mountains and you can’t access every shore of them because of the ice around. That’s why the researchers decided to use a drone for data collection.

On-Site: The Research Background and Workflow

Glacial lakes Thulagi, Lower Barun, and Imja are located at altitudes of 4045, 4538, and 5005 m above sea level. The leading site of interest was a Nepal lake the Thulagi. The team planned to gather the data on-site and then compare it to the data from satellites. 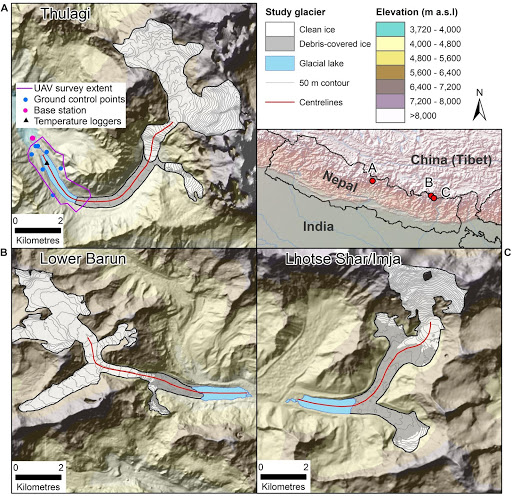 The researchers used optical and thermal satellite data and field surveys to study the thermal regime and state of the glacier and calving at Thulagi lake. Water temperatures can help predict how a glacier might behave in the future and whether the water will have enough energy to melt the glacier and change the volume of the lake.

The whole study took place in October 2017. The workflow for on-site data gathering was the following:

With this data, they moved on to post-processing the results to get a complete picture of what state the Thulagi lake was at the moment.

Photos from the drone were processed in Agisoft Photoscan. The GCPs set before the survey were then used to georeference the model. The team used RTKLIB for processing the GNSS data.

To make sure the model they built was correct, the team compared their own data with the data from UNAVCO’s permanent base station at Lamjung, 38 km away. The final model had the root-mean-square error (RMSE) of 0.56 m. The icebergs on the lake surface were manually identified, and their approximate volume in the lake was calculated. 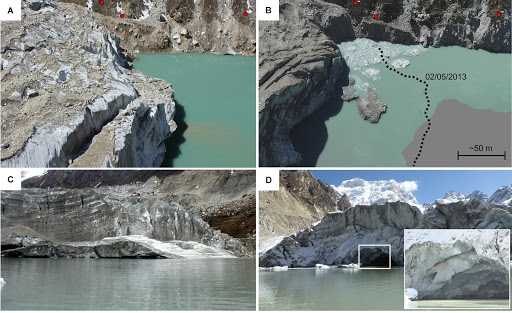 The data from the site was compared with 35 PlanetScope satellite images collected from April 16, 2017, to November 28, 2017. Using data collected locally and data from the satellites, the researchers concluded that there were two processes of iceberg creation during the period of 2017. In both cases, icebergs were detached from the glacier.

The team of researchers has shown that monitoring the proglacial lakes and glaciers using the satellite pictures and reviewing them shortly after can be very useful. It helps one understand the lake and glacier interaction, predict glacier’s mass loss, and possible flood hazards.

To learn more about this fascinating study in detail, read the original article Mass Loss From Calving in Himalayan Proglacial Lakes. Also, visit their website about debris-covered glaciers.

Special thanks to the authors for conducting this research and sharing the article with us!