[SOLVED] Full throttle at any throttle given

When I arm the quad, the motors spin fast enough to see a breeze underneath (tested with one propeller while held down). But when I give it just a tiny bit of throttle, its like they go into full throttle mode. If I give more throttle, nothing happens. I calibrated my ESCs (it is a Q-Brain and I hooked them up directly to the receiver). Besides possibly calibrating them wrong, I’m not sure what is causing the issue.

If I do motor testing in Mission Planner, it seems to work normal. Any ideas what is causing this?

You need to connect the ESCs to the Navio to have APM calibrate and control them.

I see you posted a similar question here before. Perhaps it wasn’t clear the ESCs are connected to the Navio not the receiver, as documented here:

In case you had trouble getting into ESC calibration mode then you can also set the APM advanced “ESC” parameter to force it.

Thanks! I’ll try that. Just to be clear, calibrating the esc directly, bypassing the navio, won’t work?

I re-read your reply. I just wanted to clear up some confusion that might be present. Currently, the problem is expressing itself when I have the ESCs connect to the Navio. I only disconnected them and connected them directly to the receiver when I was calibrating them. Then I connected them back to the Navio.

I am going to try to calibrate them through the APM setting and I’ll let you know the results of that.

When I passed it straight through to ESC calibration mode, it works as expected, with the motors slowly ramping up as I give it more throttle. But when I restart it, in regular mode, I have the same issue. I arm it and it seems to be either all or nothing with the throttle.

Okay clear now, I see you followed the instructions to do manual programming mode when the automatic mode does not work.

But interesting that it works during the ESC calibration mode. Then it is just like the APM parameters are not being saved into the ESCs.

From the APM side you can double-check the calibration is saved by looking for changes in the RC3_MIN and RC3_MAX variables (like Navio without rc).

From the ESC side, a good ESC programming tool like RapidFlash will allow you to check them easily, and it could always be some kind of bug/incompatibility in your current firmware version so updating that could help: 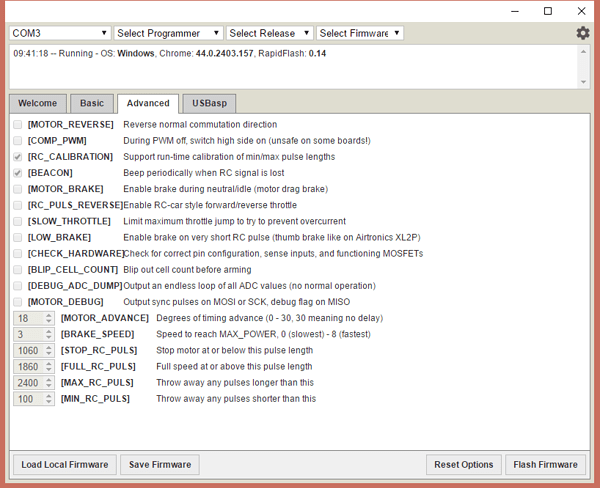 If the ESC and APM calibration parameters both look good, then it could be a bug in the automatic throttle center feature of APM and you could look at those parameters. There are also a load of other throttle “feature” parameters, so resetting all parameters to default then going through initial setup could also help, especially if you played around with beta APM and Ground Control versions during your testing.

I guess the sign of an ESC problem would be if some ESCs still start at different times, and if the range/control logic (APM) is the only problem they should all start/stop/max at the same time after calibration.

Doesn’t seem to be a problem with flight modes.

I think I found another clue, and that maybe it doesn’t have anything to do with calibration. By carefully listening to the sounds of the motors, it seems like when I give it any throttle, it goes up to 50% throttle, then after the throttle stick is moved past the 50% range, it ramps up correctly. When the throttle stick is moved anywhere from a little bit to near half way, there are no changes in the sounds of the motors, but when moved from 50% and up, it sounds like its working correctly.

Does that help narrow the problem down?

I found the problem, the ESC weren’t calibrated right after all… I think I was messing around in the “programming” mode thinking I was calibrating it.

Thanks all for the help and pointers. Now to fly it!